Meat in the Freezer

Like pretty much all hunters, I would love to shoot a big buck every year. In reality, its just not feasible for me. As someone with a full-time job, a toddler and family, a fixer upper, and a bunch of hobbies, I never seem to be able to devote as much time to scouting and hunting as I want to. So, my bottom line is meat, whether that be a trophy deer or not. This year, I was lucky enough to pull a doe tag. Massachusetts is an odd state for hunting. The eastern part of the state is loaded with deer but has few hunters and limited public land. The western part of the state is loaded with hunters and has a well managed herd. In the zone we hunt, the odds of pulling a doe tag are about 8 to 1. Fortunately, I was able to beat the odds and pull a tag this year to go along with my two bucks tags, and given everything else going on in our lives, my focus was on meat.

I have had a lingering cough since early October. During archery season, I could barely hunt because I couldn't hold back coughing long enough to go sit in a tree stand. In my limited time in the woods, I did see some deer, and I was able to scout a few good areas. On the opening morning of firearm season (shotguns and muzzleloaders in MA), I climbed a familiar ridge (one I wrote about last year) and perched against a tree. Unlike last year, when deer were moving almost instantly, the woods were quiet, excluding some squirrels and a woodpecker. As the morning sit came to an end, my brother-in-law walked from his spot up toward Mary May and I to try and push some deer. However, the push didn't initially yield anything, and he texted me saying that he would meet me on a trail to the truck. I said OK and that I would was going to wait about 10 minutes before I headed down. Two minutes later I get the text "Deer up and headed west and south". OK, I thought, that is somewhat where I am. A minute or two later, I heard deer moving down the ridge toward me and moving fast. A big doe was ahead of the pack, but I could see two other deer behind her. I couldn't see their heads, and I was hoping one of them was a buck. I brought the scope to my eye and gun to my shoulder and slowly cocked the hammer. Unfortunately, all three deer were does, and by time I swung my muzzleloader toward the big lead doe, I couldn't get a clean shot.

I was kicking myself, but I knew I had a lot of season left. I waited another ten or so minutes before texting "I'm frozen. See you at the truck". Before I began walking back, I wanted to release the hammer. I knew that you could hold the hammer back with your hand, pull the trigger, and slowly release the hammer to the uncocked position, but that method scares me, at least in the sense that I didn't want the gun to go boom. So, I turned to trusty Google to see if any other methods exist. There I was, reading about how to de-cock a gun, teeth chattering, and ready to pack it in when I hear something coming directly from the other side of the big beech tree I was leaning against. I slowly peaked around the tree to see the body of a deer about 60 yards away. It was a big-bodied doe. Well, I thought to myself, there is no better way to release a hammer. I put the deer in the scope and waited about 30 seconds for her to come into a clear shooting lane. I pulled the trigger and two other does that I couldn't see through the brush took off. However, the one in the scope didn't go far, and I walked over a short time later to see a beautiful deer that I was extremely thankful for. 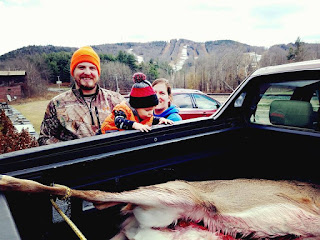 Cullen was very intrigued by the deer


By then, my brother-in-law had made his way to me, and after some field work, we got her back to the truck. My parents were in town and watching Cullen, so we swung by to show them and snap a few photos before checking in at Overwatch Outpost in Charlemont. It was the first checked deer of the day at about noon and weighed 127 lbs dressed. Through the end of shotgun season, it was the second largest doe checked and larger than many of the bucks checked at that station. As we do every year, Mary May and I did all the processing, and we ended up with about 65 lbs of meat in the freezer. The deer was easily the fattiest deer I have ever harvested. I suspect the meat will be delicious. 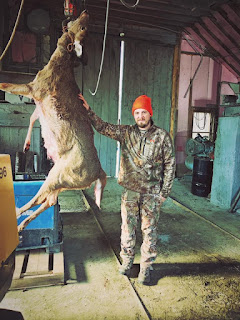 Hopefully one of us can get a buck before the season ends, but if not, I am incredibly happy to know that we have a bunch of venison in the freezer already. No matter how we think a hunt will go, sometimes, it comes down to a little luck. Tight lines!
Posted by Drew Haerer at 9:12 PM