A while ago, I got a call from my buddy Ben Duchesney asking if I would be interested in contributing to a book he was writing. I had worked with Ben on multiple articles for Kayak Angler Magazine over the years, so without hesitation, I said yes. Ben is a dedicated fly angler and even worked for Postfly Box for a couple years after leaving KAM. We ended up exchanging a few emails and conducting a couple phone interviews, then I kind of forgot about the project. Well, a couple weeks ago, the following photo popped up on my Facebook news feed. 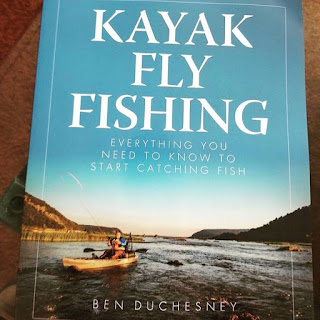 My first reaction was simply how happy I was for Ben. It was so great to see it all come to fruition for him. Although I enjoy writing, I don't think I could ever compile a book. Then I thought to myself "hmmm, I wonder if my content made the cut"?  After all, I think I dropped the ball on getting him photos to use (in my defense, most of those conversations were during Cullen's terrible sleep/colic phase). To my chagrin, the photo below of the back panel popped up on Instagram later in the day. 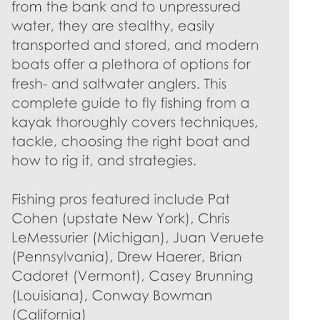 It is a huge honor to be included in the book, especially among the guys listed (a few of whom are my Wildy teammates). I haven't yet read the book, but based on the list alone, it is going to be packed with information on tying, techniques, fly choice, knots, rods, leader selection, paddling tips, and so much more, highlighting various species from all around the country. It looks like the book can be ordered from Amazon, Target, and other vendors. You can bet that I will be paging through in the very near future. Until next time, tight lines!

I recently compiled an article for the Wilderness Systems website highlighting some of the most fun fish to catch when the leaves start to change color in New England. In the article, five team members discuss their favorite species to target and how to catch them. The full article can be found on the Wildy website by clicking this link. My portion of the article is also copied below. My fishing time has been limited this fall, but the bite has been consistently good. Hopefully everyone in blog land is also finding success on the water. Until next time, tight lines! 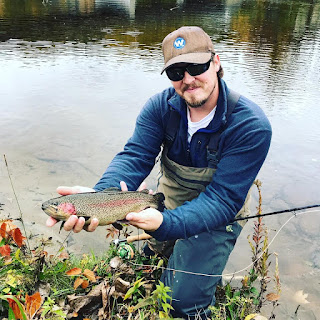 From the article:
"As soon as the trees start to drop their leaves, I get excited knowing that trout are coming out of their lazy summer patterns and getting ready to heavily feed prior to winter and the spawn. I prefer to get away from the crowds and chase fish in hard to reach places. In rivers, I generally like to set up 2-3 mile floats, and I regularly park my kayak and wade in key spots along the way. I predominantly carry three set ups in the fall: a 3-4 wt fly rod with floating line and a dry fly (generally either a midge, October caddis, or ant), a 3 wt euro-nymphing rod with a tandem nymph rig, and a 6-7 wt fly rod with sink tip line and a big streamer (such as a Swinging D or pretty much anything with “Galloup” in the name). I may use my kayak to drift along current seams or anchor at the tail end of a pool and make long casts with the streamer. In lakes, I use the same general approach, but the bite can totally change depending on the conditions, so it is important to always keep an eye on the surface and on any activity in the water that may help you unlock the puzzle on a given day."
Posted by Drew Haerer at 7:55 PM 13 comments