A do-it-yourself Euro mount of my buck from this year didn't sound too hard. After all, I'd seen a few of my friends on Facebook do it. Yet, as I sit here now, freshly done with the process, the $75 fee to have it done by someone else doesn't sound too bad. I'm going to step you through the process of my homemade European mount, and you can decide for yourself if you want to go the DIY route. 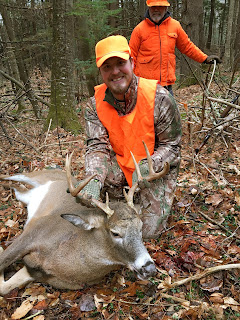 
First, I'll start by saying that I shot the buck in early December. I knew I wouldn't get to the mount until the end of the season at the earliest, so I cleaned a lot of the meat from the neck and hung it in the (unheated) barn. I guess I could have made room in a freezer for it, but that would have been a real pain given the antlers. Eventually, the season ended, and I had to catch up on other projects, so the head hung for another couple of weeks. Finally, it was time to give it a go. I watched a number of YouTube videos and read a number of articles about the cleaning process. Honestly, a lot of the articles simply were not helpful. They either weren't detailed enough or were only convenient if you have certain tools/equipment that I don't have. However, this video was far and away my favorite: https://www.youtube.com/watch?v=PZu95UWqqTk. Not only was it informative, simple, and detailed, but the guy in the video has a sweet western PA accent. In addition, like this video, I don't have immediate access to a pressure washer or air compressor--two tools that are often cited as "necessities" in so many Euro mount articles. Although they certainly would have helped at times, a little extra time, effort, and elbow grease did the trick.

Overall, the head had a bit of a funk to it, mainly smelling like decaying meat, especially when I peeled off the skin. However, it really wasn't that bad...until I got to the mouth. At that point, a pungent smell that I won't soon forget wafted into my nostrils. The tongue had begun to decay...and it wreaked. Plus, it had partially turned to mush and coated parts of the mouth. So, in step 1, as soon as you decide you want to do a mount (i.e., when the deer is still fresh), cut the tongue out of the deer. The brain also began to turn to mush. Although gross, it didn't smell that bad, and it actually made it fairly easy to remove, but more on that later.

It took about 40 minutes to remove the skin and cut some of the bigger chunks of meat from the skull. At this point, the only tool I had a used was a small skinning knife. I prefer a small knife that is easy to finesse into small spaces and around delicate features. In addition, I highly recommend having a picture of a Euro mount in front of you, especially if you haven't done one before. Parts of the skull, such as the nose and sensory pits, are easy to break or mangle. Plus, a picture provides a good reference for identifying features of the skull that aren't necessarily common knowledge, which will help in the cleaning process. With my head "fairly clean", I went outside to start the fire.

In the video above, water is boiled on a hot plate, and many articles recommend using a turkey fryer. I don't own either of those items, and I certainly wasn't going to do it inside on the stove, so I planned ahead to do it over a fire. Thankfully, we have a couple nice fire pits at our house. I had saved a box of wrapping paper to get the fire started, to which I added the Christmas tree and some logs from our land. The fire was ripping in no time. Still, it took about 45 minutes to get the water in a 17 gallon tin wash bin (full of approximately 14 to 15 gallons of water) to get to a simmer. I also added a quick squirt of dish soap into the water to help breakdown oils on the skull. 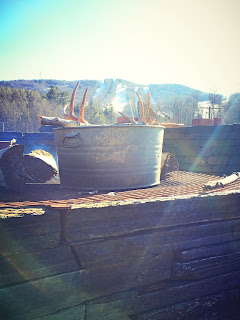 While the water was heating, I went back inside and grabbed some electrical tape. I used the tape to wrap the bottom 3"-4" of each antler. Although I wasn't using any sort of bleach or chemical in the water, the antlers have quite a bit of dried plant material on them from the buck rubbing trees, and I wanted to preserve it as much as possible. I then zip tied the antlers onto a long branch, placed the branch across the wash bin, and put the skull under water. I will warn you, do not fasten the zip ties too tight, as you may want to adjust the skull a bit during the boiling and cleaning process. I then set a timer for 2.5 hours and headed back inside to spend time with the family, although I did pop back out every 30 minutes or so to add wood to the fire.

After the 2.5 hours, I removed the skull from the water and began cleaning. At this point, I was using a mix of a knife, needle nose pliers, hemostats, and a wire brush. Although I was able to clean off a bit more meat, cartilage, and membrane, it needed more time in the water. However, the lower jaw did pop right off, and the eyes weren't too tough to remove. In hindsight, I would give the skull at least 4 hours (maybe even 5 or 6) during the first "slow boil". So, back in it went for another 2 hours. 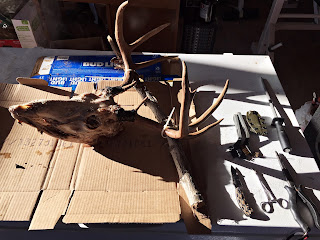 The work station after the first 2.5 hour soak


Finally, I grabbed the skull again and removed as much material as possible. However, it was simply too dark to continue working on it. Although the area I was working in is well lit, it is lit by one large spotlight-style bulb that casts shadows that made it difficult to effectively work, especially around delicate areas like the nose cavity. So, I threw the skull in a box and stored it in a heated area overnight, mainly because I was worried that the water in the skull would freeze and lead to damage if left in the barn. If you plan on doing your Euro mount the long way (i.e., without a pressure washer or compressor), start the process early in the morning. However, even if you get all of the meat and material removed in one day and are ready to whiten the skull, I would let it sit overnight to dry, then wipe the skull with a rag to remove any residual oils. 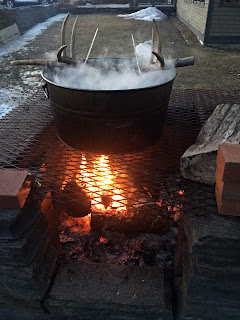 Back to the fire for more soak time

The next day after work I grabbed the skull again for an hour or so of cleaning before dark. Although some of the material had become overly dry and hard, I was able to remove a lot more material, including a lot that came off easily using a wire brush. In addition, I used a screw driver to essentially scramble anything and everything in the brain cavity. I then ran water from a spigot into the cavity to flush out the material. I repeated this process 3-4 times, and afterward, it looked pretty good. The biggest problem area remained the back of the skull near the "ear lobes". I tried to remove the lobes as noted in the video above, but they simply weren't ready yet. Specifically, I put needle nose pliers in the lobes and tried to twist and work them free, but it just did not happen. I recommend using short pliers instead of long pliers during this step, as the long pliers wanted to flex and bend. I knew I had to remove more material, so I put the skull back in hot water.

This time, I wasn't doing another fire, and my wife was kind enough to let me do it in the kitchen since there wasn't much left to do. Thankfully, it didn't really smell, and two hours at a steady simmer did the trick. Some chunks of meat and material came off in the hot bath, and the rest of the meat was fairly easily removed with pliers, forceps, and a wire brush. Additionally, the ear lobes popped right off (see detailed instructions in the video above). At that point, it was time to prep the peroxide bath. Initially, I mixed a concoction of peroxide, baking soda, and water. It formed a paste that I used to coat the skull. I then let it sit for a few hours. Unfortunately, it didn't really do the trick. So, I decided to mix a batch of peroxide and water in approximately a 1:1 ratio. Note that you will need two important things during this step: an ideal size bin and a lot of peroxide. Some folks heat their peroxide-water mixture, but I kept the mixture at room temperature to avoid antler discoloration caused by the steam. After eventually finding a plastic bin that was a decent size (tall sides, long enough to fit the skull, and fairly narrow), I added the peroxide and water. I only had three bottles of peroxide (two "regular" bottles and one with a spray nozzle), so I could only cover about 1/4 of the skull, but thankfully, I was able to completely cover the teeth and most of the nasal cavity. I then regularly sprayed the skull with about a 60:40 peroxide-water mixture and also poured the mixture in the bottom of the bin over the skull every hour or so. I let the skull sit and doused it for about 36 hours. At that point, the skull wasn't bleach white, but I felt it was the perfect tone--white enough to look clean, but off-white enough to look natural. I really don't like the look of the uber white skulls. 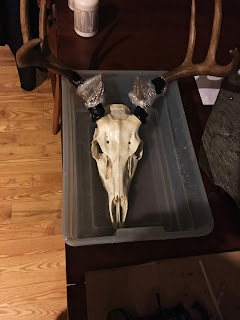 The skull soaking in a whitening mixture


Mounting the skull was pretty easy. I used a piece of old barn wood, a 4" decking screw, a 7/64" drill bit, and a drill based on the video linked above. I drilled pilot holes in the board and skull. Then, I put the screw through the wood and into the skull. I added a hangar on the back, and the process was finished. Although this is probably obvious for most, make sure that you hang the mount in a stud or using an anchor of some sort. Additionally, I will note that I drilled everything at a slight angle because I liked that look better. A more vertical mount limits what you can see of the the more intricate parts of the skull, and after all the work that went into it, that seemed like a real waste. 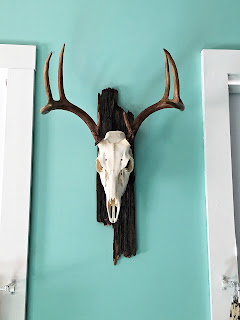 The finished project hanging in the nursery


So, would I do it again? I think I would, but I would ABSOLUTELY borrow a pressure washer. I would even go down to the local gas station with a pocket full of quarters and use the air compressor. Additionally, I would tweak some of the "boil' times (particularly, a longer first soak), and I would definitely clean the skull more before starting the process. If you are going to do everything by hand, buy forceps with large finger holes. The ones I used were what I generally use for fly fishing, but they got really annoying during skull picking because of how poorly they fit and moved on my fingers.

I hope this blog helps you on your quest for the "perfect" DIY Euro mount of your next deer. It is quite the process, but it is totally worth it. Until next time, tight lines!
Posted by Drew Haerer at 3:30 PM