There aren't many feelings like seeing a buck approach through the woods. Your heart rate cranks way up, and remaining calm, cool, and collected can be a challenge for any hunter. If you are lucky, the time comes to line up a shot and squeeze the trigger. Often, that moment is the culmination of months or even years of patience and hard work. Bang!

This sequence pretty much sums up my opening day of shotgun deer season here in western MA. I was up early and headed for a section of woods with fresh sign where I had spent a lot of time archery hunting last year. After about a mile walk, I was tucked in behind a large, split-trunk beech tree. I had about 20 minutes before first light, but I was able to survey some of the surroundings in the early twilight. Literally, one minute after legal shooting light I heard something charging up the ridge to my south. "No way", I thought to myself. This is not how hunting works. You don't see deer just one minute into the season. I was almost positive it was a deer, and it was headed right to me, but it slowed down before reaching me, and instead of continuing to the top of the ridge, it split off and headed southwest on a lower secondary ridge. I never saw the animal, but it had me optimistic.

About 40 minutes later I heard something moving fast from the west. It sounded too human to not be a fellow hunter. Notably, there was a slight swishing sound between distinct bi-modal footsteps. Maybe it was Sasquatch or some ridiculously giant buck or bear, but I never saw it either, as it continued west without hitting the upper flat where I was situated. Still, my optimism was high.

I then spent about an hour scanning the woods and trying to shake the cold. Even multiple insulated layers were no match for the mid-20 degree Massachusetts morning. Then, I heard crashing through the woods to the south. It almost sounded too clumsy to be an animal, but to my surprise, a young doe was moving briskly in my general direction. Then, she turned and headed directly toward me and eventually paused about 20 yards away. Suddenly, I heard crashing behind her, and I knew exactly what was happening. I could hear him grunting as he charged, love struck, in my direction. With his neck bristled and nose to the wind, the buck only had one thing on his mind. I could see a rack, although it was tough to tell how big, but likely in the 6-8 point range. Unfortunately, by the time he got within about 100 yards, the doe had started to make her way directly east from my stand. In turn, he started to angle away from me. Seeing my chances of bagging this buck quickly decreasing, I could only hope that he gave me a chance at a shot. He briefly paused pseudo-broad side about 70 yards away. It wasn't the clearest or easiest shot, especially with an open-sighted shotgun, but I knew my hunting time would be limited this year, so I decided to take what the buck gave me.

I rushed the first shot, focusing my eyes more on the brush in front of the deer than on him or my sights. I'll chalk it up to nerves. The second shot was better, but still a little hurried before the deer realized what was going on. By his reaction (or lack thereof), I didn't think that my slug had made contact. I waited for about 20 minutes before surveying the scene, and sure enough, there was no blood, no hair, and clean tracks headed east. I had missed. 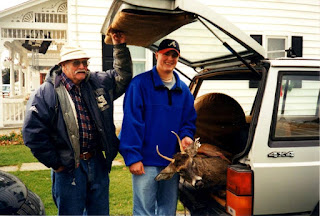 
I hate missing. It happens to everyone, but dang is it a tough pill to swallow. As I made my way out of the woods to meet Mary May an hour or so later, I was able to put some of it into perspective. I rushed the shots, and I didn't go through my usual mental progression before I shot. Some of that can be attributed to being out of practice. I haven't shot much this year, and practice goes a long way, even for the most experienced hunters. Also, the idea of my first MA buck has filled my head for years, and I think buck fever got me a bit, as this was the first MA buck I've shot at since moving up here in 2014. However, failure is probably the best learning tool there is, and I learned a lot from my mistakes that morning.

The rest of the day was quiet, and none of us saw another deer. Fortunately, I got a chance at redemption the following Saturday, and this time, I made the most it. That story is coming soon. Until then, tight lines!
Posted by Drew Haerer at 2:55 PM