The annual Yakangler.com Kayak Angler's Choice Awards have arrived. Actually, they arrived a month or so ago. The first round of nominations ended, and the top nominations can now be voted on in round 2. Admittedly, I didn't participate in round 1. I've gotten tired of seeing this become a popularity contest. People with 10 Instagram accounts, 20 Twitter handles, and multiple Facebook pages seem to get the most votes, while more deserving anglers are left in their wake. However, there are also a lot of votes that get it right. Maybe I am helping to fuel a negative change by doing nothing, much like the thought of voting in the upcoming election makes me want to not vote at all. Conversely, part of me didn't vote because there are too many deserving people, products, etc. out there to choose just one. Personal philosophy aside, Man Powered Fishing was nominated for blog of the year, as were a number of other great blogs and websites. This has been a tough year for blogging, and I feel like I had so many grand plans that just never materialized, but I am thankful that people read and enjoy the content! It is always humbling to be nominated by your peers, and this marks the fourth straight year that MPF has been nominated. As other bloggers can attest, it takes more time, effort, and energy than most think to run a successful blog or website. So, a big thanks to those who nominated this blog - you certainly brightened my Monday morning. Check out all of the nominees over at the Yakangler KACA page. 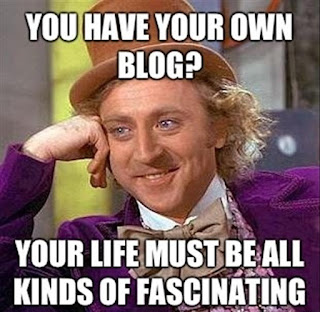 Yes, this is sarcasm...and also a tribute to the late, great Gene Wilder

I very briefly looked through the nominees in all categories, and I was super happy to see some of the products that I use and endorse get nominated, including the Wilderness Systems ATAK 140 for kayak of the year and Bending Branches Angler Pro Plus for paddle of the year (I probably missed others).

Tight lines voters (or non-voters)!
Posted by Drew Haerer at 11:06 AM