Finally, picture #10 gets to be posted. This fish was special for a number of reasons, but mainly because I got to share the memory with a best friend who I don't get to fish with very often these days. Travis and I grew up together in central PA. After meeting in Spanish class, we realized that we both love to hunt and fish. The rest was history. I can't begin to count the number of fish we've caught together, but there have been plenty of big fish and fun stories. This particular fish was caught on a Friday afternoon in a river that is near and dear to my heart in North Carolina. Travis drove down a day before my official "bachelor party" so that we could spend an extra day on the water. Overall, the day was pretty tough, and a couple big fish managed to give us the slip. Finally, this giant inhaled a Rico popper and started to pull drag. I couldn't believe the size of his head as I lifted him out of the water. What a beast! 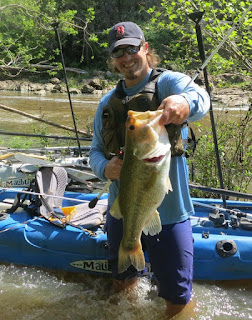 Eventually, the fish ended up making its rounds on various websites, including in an article in Kayak Fish Magazine.

I should also note that the timing of this blog was pretty perfect, as last weekend Travis entered his first every kayak tournament. The event was held by the PA Kayak Fishing Association and benefited Heroes on the Water. In a grueling 2-day event, Travis managed to bring home first place, and our buddy Ken Glassner took home biggest fish (any species) with a chunky catfish. Congrats to them both!

Until next time, tight lines!
Posted by Drew Haerer at 12:30 PM