Day 5 of the fish pic challenge is a fish that is near and dear to my heart - the Roanoke bass. I caught my first Roanoke shortly after moving to central NC in the summer of 2008. Given their similar appearance, I thought it was a Rock bass; however, I was quickly corrected after posting a picture online. The Roanoke bass is a unique species of bass, although more of a sunfish than a black bass, that lives in only a handful of watersheds in NC and VA. This one wasn't particularly big, but it had gorgeous spawning colors. 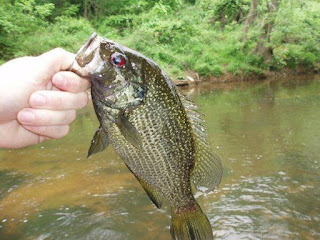 Over the course of my time in NC, I caught numerous Roanokes, including many that surpassed the IGFA world record. Coincidentally, the IGFA record is 1 lb 5 oz, but the NC state record is 2 lbs 11 oz. The VA record is listed as 2 lbs 9 oz. I have heard numerous stories as to why those state record fish aren't recognized as IGFA records, but the real stories have probably been lost in translation over the years. Myself, Gary Ribet, the Froggy Waters Outdoors crew, and many others won't submit an IGFA record unless it also breaks the state record. Although I've caught some fish over 2 lbs, and even a couple around 2.5 lbs, I have only seen one fish that I believe would have broken the NC record. It was caught by a good friend of Gary in a central NC river. After a couple quick photos, it flopped off of a measuring board and swam away, so we will never exactly how much it weighed. However, I wholeheartedly believe it was over 3 lbs. In this day and age, I suspect someone will lust for that piece of paper that says they caught a world record, and we will slowly see the IGFA record go up in weight. For me, it was always about the fun and the challenge, rather than a piece of paper that hangs on the wall. Go grab your creek tromping shoes, an ultra-lite rod, and a handful of lures and get knee deep in a river full of Roanoke bass. There aren't many better ways to spend a summer day!
Posted by Drew Haerer at 3:00 PM