Day 3 of the challenge was a memorable day on University Lake. "U" Lake is the location of the annual/bi-annual Duke-UNC Charity Fishing Tournament. The fishing clubs from the two teams square off in a bragging rights contest that benefits charity (100% of the proceeds go to the charity of the winners choosing). The year prior, my fishing partner Santosh and I had won the event, catching around 20 fish over the course of the day. That blog can be found here. However, spring was unusually early, and fish were in an early spawn funk. We started the day with a solid 4+ lb fish flipping to wood cover. A short while later, we had a borderline 8 lber in the livewell. In the afternoon, we put the icing on the cake, landing another stud out of wood. Other than a couple short strikes, we didn't miss a legit bite all day, ending with 3 fish for 18 lbs 9 oz. That was good enough to win the event by roughly 3 pounds, making us repeat champs. Full details of the day can be found here. 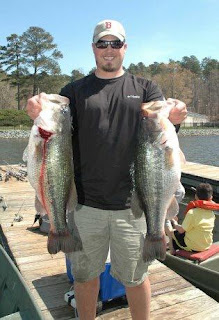 
The following year, Santosh and I fished on different teams, as we had a number of young anglers joining the Duke club. It was a pretty tough day on the water with my new partner Dean, as conditions made it tough. We had a small limit until literally the last minute, when I landed a 7+ lber from under a dock to seal the deal. That win gave Duke the three-peat. That was my last event, but the Duke club also went on to win the last two or three events. Sadly, I don't think the tourney happened in the past year or two, but it was always a great time for great causes.
Posted by Drew Haerer at 8:30 AM