I've noticed that Facebook has become the modern day form of spam email. "Like" this or you won't have good luck. "Share" that or I won't give you 10% off my product. "Come play this (time wasting) game with me". I could go on, but you get the point. However, FB has also become a place for bickering and negative political banter. It seems like all the terrible things from the media end up there, yet you see considerably fewer positive posts. Thankfully, I am friends with some great folks who always manage to make me laugh and smile with what they put online. That includes people putting up awesome pictures of fish. Where am I going with this, well, a couple weeks ago a hashtag trend started for the #profishingchallenge. The name is a bit misleading, but the goal is to load up FB with fish pics rather than negativity. So, if you get nominated, you post a fish pic for ten days. I'll admit that as soon as I saw the hashtag, I knew it would eventually come by way...and I balked at it. But when my nomination came (via good friend Chris Ferguson), I actually really enjoyed looking through some old fishing pictures. Rather than post all my biggest fish or sunsets and scenery shots, I decided to grab 10 photos from trips that mean a lot to me. I am going to post them here for the next ten days, with a brief recap of each picture. Without further ado, I present pic #1. 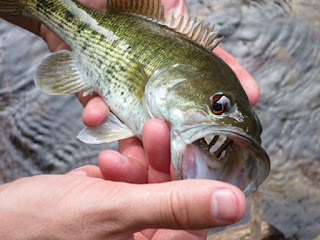 
This fish is a Bartram's bass, which is a subspecies of the Redeye bass. Redeyes are only found throughout parts of the southeastern US (off the top of my head - SC, GA, AL, and possibly TN). Although they generally don't get very big, they are an aggressive species that mainly occupy rivers. The Bartram's was the first target on the BASS Slam trip that Bill Kohls and I did back in 2012. We had driven all day and got to the river in time to fish for about an hour. It looked more like a trout stream, but before long Bill caught one on a jerkbait and I soon followed suit. It was an amazing start to what would be an (brace yourself for an overused term) epic road trip. Spoiler alert - later that year, we completed the BASS Slam in Texas with my Mary May in tow. We made a lot of good memories on those rivers - and this is one I will never forget!
Posted by Drew Haerer at 1:01 PM