The late fall and early winter weather have been unbelievable this year. Unlike the foot of snow that got dropped on us on Thanksgiving eve last year, we haven't seen a flake yet and temps have been unseasonably high. The warm temps led to some fantastic mid- to late November fishing, but I've spent all of my December free time (which hasn't been much) in the woods. The crazy wind put a slight damper on my fly fishing, but I still carried the long rod on nearly all of my trips and typically pick up a few trout on it. However, I've been using lures a lot more...and they haven't let me down. I had quite a few 30-50 fish days and many others that resulted in more than a dozen trout. So, I've decided to make a list of my top 5 favorite trout lures. Hopefully, it helps you put more trout in the boat as well! 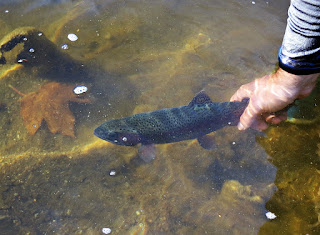 I'll start by saying that I throw all of these lures on either 4 lb or 6 lb test line, which may be fluoro or mono depending on the technique. I typically use a 6' Fenwick HMX ultralite rod paired with a Pflueger President size 20 spinning reel. Sometimes I will also use a 6'6" Carolina Custom Rods medium power rod with an Abu Garcia Orra S 30 spinning reel. Both are super sensitive and allow me to throw a wide variety of baits.

1) Bass Pro Shops XPS Slim Body Floating Minnow
When I was about 16, I somehow ended up with one of these in my tackle box. Typically, I strongly urge folks to avoid Bass Pro Shops brand hardbaits, because about 50% of them require significant tuning to run correctly out of the package. The XPS Slim minnow is no different. I would say that about 1 in 3 don't dive correctly and require some tuning. But those that do (or after tuning) absolutely catch trout. They have a wider wobble than most jerkbaits, which is something different that the trout don't often see. I fish both the small (about 2.75") and medium (about 3.75") baits and almost always use the color "mirage". However, i've also had luck using the chrome black back and olive ghost shad colors. I've found that the smaller size catches more fish and both sizes seem to catch about the same size trout. But on certain days, they prefer one size to the other. In current, you can often straight reel the lure (like a crankbait), but in most lakes or flat water areas you will need to work it with a typical "reel, jerk, jerk, pause, repeat" cadence. In particularly deep lakes, I will rig it on a 3-way swivel, which attaches to the main line, a 14" piece of line with a 1/2 oz weight, and a 14" piece of line tied to the lure. The 3-way rig can be a pain to cast on light gear, so I typically troll it instead.

2) Mepps Aglia or Blue Fox #2 Spinner
If you make a list of your favorite trout spinners and an inline spinner isn't on it, you should probably throw your list in the trash. I prefer Mepps Aglias and Blue Fox spinners, but will occassionally use a Rooster Tail or Panther Martin. The one thing that I always stress with spinners is to go big. I almost never use spinners smaller than #2 (which is based on blade size). Bigger spinners have almost always correlated to bigger trout for me, plus #2's will catch piles of smaller fish too. There is just no reason to go smaller unless they are being super picky. I typically prefer undressed (i.e., no hair/feathers on the hook) silver, gold, or copper blade spinners. I do carry a few with hair tails, but find that they typically produce fewer fish than undressed baits. Spinners, particularly Blue Fox spinners, sink fast, but will rise fairly quickly as they displace water during the retrieve. That is why a big blade is so helpful, because you can reel at almost any speed and the blade will turn, including incredibly slow retrieves. One note - I sharpen my spinner trebles about once a week. For whatever reason, they seem to dull faster than many other hooks.

3) Thomas Buoyant Spoon
I found my first Thomas Buoyant spoon stuck on a log in the middle of a creek. One day, I got bored and tied it on. The rest is history. Compared to traditional spoons, it shimmies, shakes, and swerves, but still puts out a great vibration. I typically use the 1/4 oz size and replace the factory hook with a highly quality treble. When it comes to color, I prefer a basic silver (the duller the better), and have a few with dots and lines on them, but nothing overly bright or unnatural. I'll make long casts with the spoon and either use a slow, steady retrieve or work it spastically back to the boat. On many days, i'll get my biggest bites when i'm retrieving the spoon at a painfaully slow pace.

4) Rapala X-Rap or Husky Jerk
I grouped these two Rapala baits because they are very similar suspending minnows, with only slightly different profiles. Both dive to 4-5 feet and suspend when retrieved. I work them with a typical jerkbait cadence, especially along contour drops where fish are feeding up.  I'll adjust the length of my pause based on the response of the fish, which often means slowing down in non-ideal conditions.I prefer the 3 1/8" X-Rap and 2 3/4" Husky Jerk in natural colors.

5) Rapala Floating Minnow
The Rapala Floater has an action that is somewhere between the BPS XPS minnow and a Husky Jerk. The nice thing is that it has a nice wobble when simply reel in, but also moves well when worked with a jerkbait cadence. I will fish a wide variety of sizes ranging from 2" to 4" and typical natural colors.