Our 2015 Wyoming Trip - It Gets Harder to Leave Every Time

Starting in 2011, Mary May and I have made it out to Wyoming every other year. My sister and her family live in Gillette and MM's uncle grew up about an hour west of there in Buffalo. In fact, his family were Basque immigrants who have a long history in the area as sheep ranchers. The main focus of this trip was elk hunting. We were fortunate enough to have a chance at a non-resident cow elk tag on private land in a management area which the state biologists determined has an over abundance of elk. Thankfully, Mary May's aunt and uncle have about 6,000 acres of range land in that specific management area. They lease the land to cattle and sheep ranchers as well as a hunting guide, who was willing to take us on our 5 day excursion. In addition to hunting, we wanted to visit family, fish, hike, and soak in the mountain air. We didn't harvest an elk, but we had an absolutely amazing trip. After every trip out there, it gets harder and harder to come home. This blog is picture heavy, with some text mixed with lots of lengthy, informative captions.
After flying cross country and sprinting through the Denver airport, we made it to Gillette fairly late and immediately crashed. The first portion of the next day was spent with my sister and nephews in Buffalo. The town has an amazing park for kids (and us big kids), where I learned that you better be in shape to keep up with kids on a playground. We even spotted a few trout lying in Clear Creek. Eventually, MM and I headed out to Worland where we would meet up with Daylen Carrell, our guide for the week. We got to meet some of his friends and family, check out some photos of their recent (and amazing) caribou hunt in Alaska, and start prepping for the hunt.
4:00 AM came awfully early the next morning. After an hour or more of driving to the Falxa properties, we slowly started scoping and listening in hopes of seeing a herd or hearing a bugle. Right off the bat, we were seeing a lot of mule deer and wildlife, including the group of 6 batchelor bucks pictured below. However, elk were proving to be elusive.
﻿ 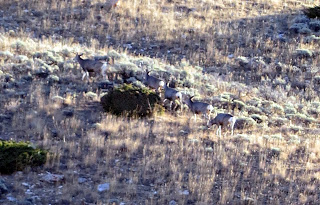 To make a long story short, we hunted from before sun-up to dusk for 5 days. Unfortunately, it was unseasonably warm, with day time high temps ranging from 80-90 degrees. This meant that the elk were active for about 2 hours early and late and spent the bulk of the day sleeping in steep, densely vegetated canyons. Still, we managed to see quite a few elk, but almost always on properties we couldn't hunt. Thankfully, the scenery was absolutely amazing and we filled our days with glassing, looking for antler sheds, searching for Native American artifacts, learning about the properties and the history of the area, and snoozing in the shade.
﻿

A panoramic shot MM took of me glassing a valley 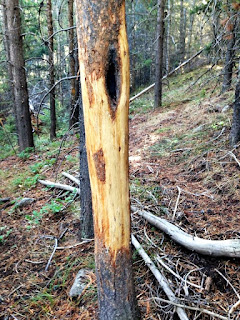 A small elk rub...we saw some on trees pushing 20' in diameter 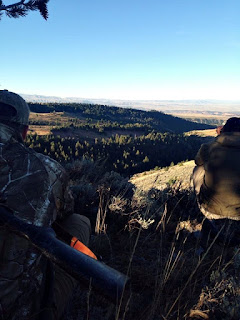 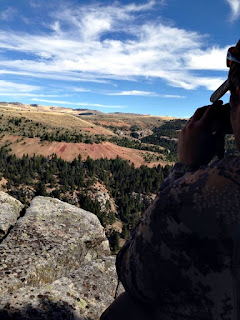 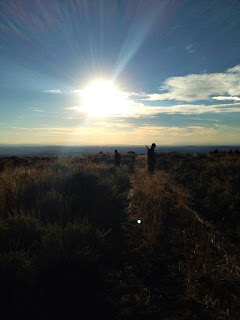 Stalking some elk that were, briefly, in the right area 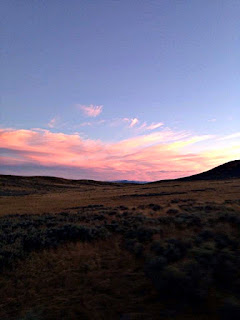 A beautiful WY sunset
As you can tell from the shots above, we did a lot of glassing. In fact, on day 1, I could barely spot anything. By the end of the trip, I was getting pretty good. Daylen is on another level with his optics - just unreal. We were regularly glassing animals that were 2-3 miles away. By day 5, spotting anything under a mile was becoming second nature - much different than hunting here on the east coast.

On the second evening of the hunt, we had our closest encounter with an elk. They were slowly (very, very slowly) making their way up a canyon toward the property we could hunt. There were numerous bulls in the herd, including a giant herd bull, as well as 20+ cows. Unfortunately, only a couple of the cows were headed our way. Finally, they got to the fence they needed to cross, but it was getting dark fast. They would even tease us, putting their front legs up on the fence, but not crossing. Eventually, one did cross, but she was around 425 yards away. By the time she got to a more manageable distance, in this case 350 yards, we just couldn't get a clean shot and dusk set in. I was really excited about the encounter and figured it was a sign that we would get a better chance later in the week. In hindsight, it became the "what if" moment of the trip. 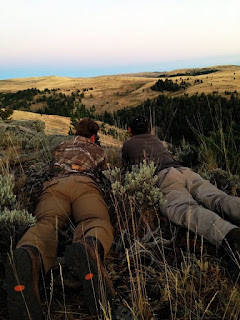 Putting a cow in the scope at 400+ yards 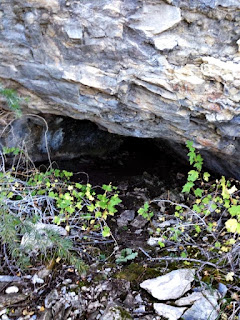 This was a cave that we hiked to and explored one afternoon. There were elk, deer, bear, racoon, and other tracks and beds all around/in it and inside it was quite large. 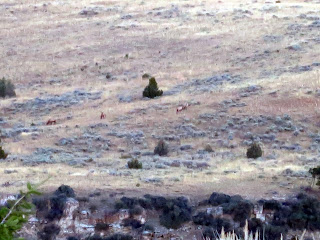 One morning before sunrise we could hear elk sparring in the distance. Sure enough, when the sun came up there was a group of 6 batchelor bulls across the canyon. At times, two sets were fighting simultaneously...incredible! 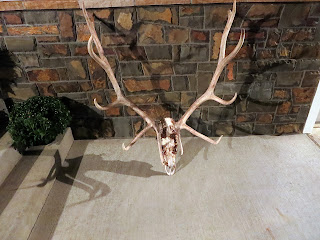 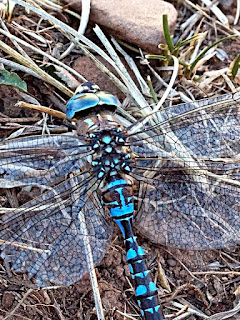 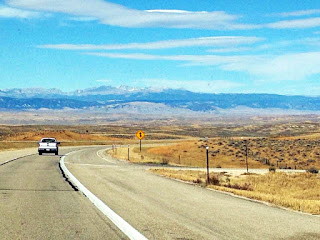 This is a view of the Bighorn Range heading west from Gillette to Buffalo. I've always loved the difference in scenery as you drive through different parts of the state. 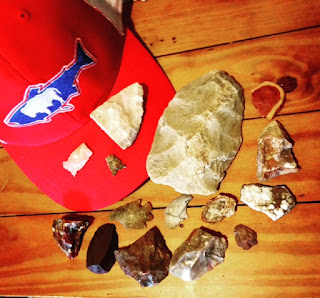 A bunch of arrowheads, scrapers, tools, miscellaneous pieces, and cool rocks that MM and I found during the trip, as well as my new Rep Your Water hat from WY
On the fourth evening of the hunt, we had another close call, but the wind did a 180 degree turn while we were hustling to get closer to a small group of elk who were walking a canyon edge. Unfortunately, they were moving away from us, scented us, and the rest is history. Not harvesting an elk was a real bummer, but we had so much fun and learned more than we ever expected. A huge thanks to Daylen of D&D Outfitters for a fantastic trip, as well as his amazing family for being gracious hosts.
After the last evening of hunted, we headed over to the Middle Fork of Clear Creek to the Falxa cabin. It was late by the time we arrived, so we went straight to bed. The next day we slept in, went into town for licenses, flies, and food and then headed to the Cloud Peak Wilderness for a day hike and fishing trip. Since our time was limited, we decided to hike to Sherd Lake, which is about a 50-60 minute almost entirely uphill climb from the trailhead. As usual, its beauty and fish population did not dissapoint.﻿ 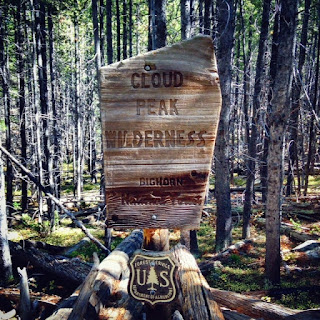 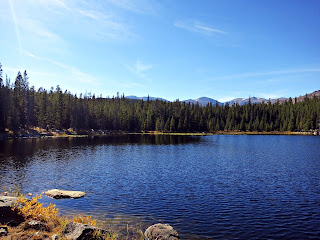 MM doing work at Sherd Lake in the Bighorn Mountains

The lake has a population of stocked, hold over, and native Yellowstone Cutthroat trout. From what I was told, the lake is stocked every few years. That strategy seems to be working, because our rods were bowed up nearly all day. The key flies were fairly small terrestrial patterns - ants, small hoppers, bees, beetles, etc. I almost always drop a nymph behind my terrestrials, and we caught quite a few on nymph droppers as well. Most of the fish weren't overly chunky, but they were long, strong, and super fun to catch. The bulk of the fish that were reachable from shore were situated along weed or lily pad edges. In deeper areas, they would streak out of the depths to hit our flies. In shallow areas, you could often stalk and sight cast individual fish. I didn't want to leave! 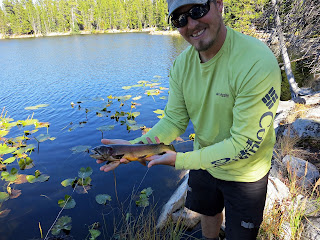 A beautiful 16.5" male cutthroat that ate a black ant 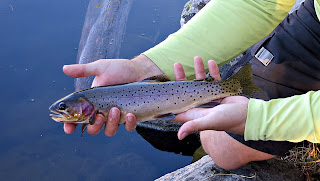 Another gorgeous cutt that ate a copper john nymph 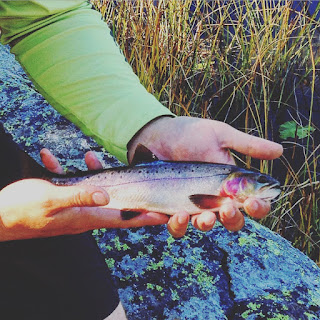 Another gorgeous cutt...I love these fish!
It is always tough at this alpine lakes, because you typically have very little room to backcast and the wind is always gusting. Kudos to MM, because she did a great job casting and landed a bunch of trout. Overall, I would say we landed around 30 between us in about 4 hours of fishing.
﻿ 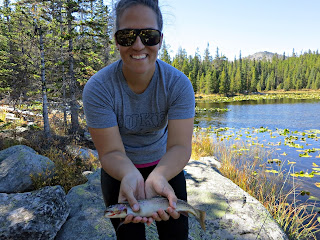 MM's first cuttie of the day 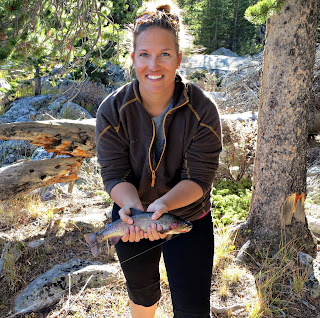 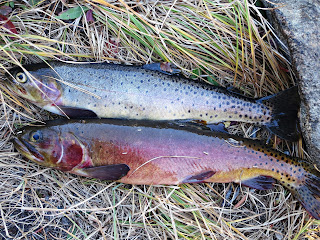 As is our tradition, we kept two trout to eat. 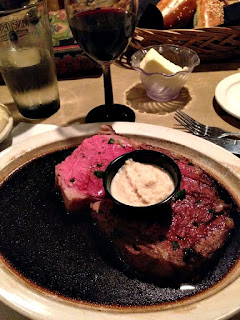 But the trout would have to wait until breakfast, because we had to hit the Winchester Steakhouse before skipping town. Their prime rib is other worldly! 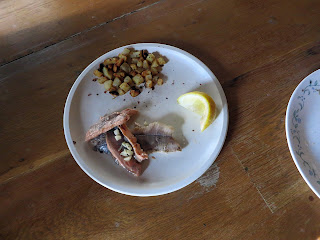 A trout and potato breakfast with some garlic and lemon
After cooking breakfast and cleaning the cabin, we headed down to Buffalo. We had about 2 hours to fish before our ride arrived to take us back to my sister's place in Gillette. So, we fished Clear Creek right there in the middle of Buffalo. After spending some time scouting after our trip, we should have fished further downstream. But, we still managed about 20 rainbow and brown trout ranging from 8"-14". 90% of these trout came on nymph rigs, but a few did eat ants and hoppers.
﻿ 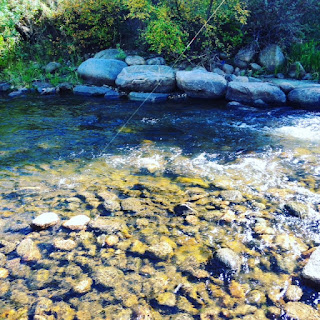 Hooked up on Clear Creek 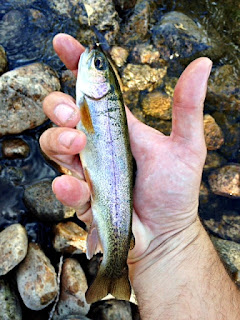 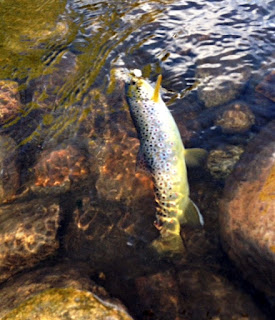 My biggest brown trout of the trip. In fact, this was the first day I had caught brownies in WY due to where we typically fish.


We grabbed a quick lunch at Rollin' Coals, a new BBQ joint on Fort St. in Buffalo. Wow, was it good! We had wings, brisket, and sides. Their sauces were particularly tasty, especially the Missouri BBQ sauce, which was a mix of thick and spicy, with a heavy vinegar taste. We spent the rest of the day visiting with family and were up early the next day to fly home. In fact, we were awake before 4:30 AM on 6 days of the 9 day trip.

On our flight from Denver to Boston, we got off the ground and were in the air for about 20 minutes before our plane had to turn around and do an emergency landing. One of the air seals around a cockpit window was leaking, causing a high pitched screeching noise for the pilots. We landed to all sorts of flashing lights, emergency vehicles, and general fan fare. Thankfully, it was all for show and after another 2.5 hours in the airport we were back on our way.

A big thanks to Betty and Martin Falxa for helping us figure out transport, giving us places to stay, and letting us hunt the Falxa land, but most of all, for allowing us to create these amazing memories of the wild west!

Now, when can we carve out some time to head out west again? Tight lines!
Posted by Drew Haerer at 12:19 PM