It is a great time to be a kayak angler. With ICAST occurring last week in Orlando, FL and Outdoor Retailer slated for the first week of August in Salt Lake City, many companies are pumping out great new products. As usual, ICAST introduced us to some really innovative new products...and some probable duds.  But, for better or worse, the kayak fishing industry is quickly pushing toward the forefront of the outdoor industry.  Here are my 5 favorites (and a couple honorable mentions) from ICAST 2015.

Wilderness Systems dropped their teaser video about a week early, but man do they have the kayak fishing world buzzing. Their new X-pod motor drive was released at ICAST, as was a new and improved Tarpon 130X and ultralite versions of multiple boats in RealTree camo. They have hinted at an X-pod pedal system coming at Outdoor Retailer (OR), as well as the possibility of new/modified models in the near future. Confluence also launched a new Perception Pescador Pro, which is a sharp looking boat in its own right. I suspect they will take the interchangeable X-pod concept and absolutely run with it, as it fits/will fit the ATAK, Thresher, Tarpon X, and more models down the road. Below is their teaser video and a photo of the new Tarpon 130X, which has yet to be formally released. 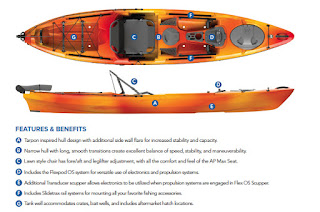 This thing is the Swiss army knife of paddles, because it can do it all. It will combine with your current Bending Branches angler series paddle (excluding Plus ferrule options) to create a canoe paddle, stand up (paddleboard) paddle, 8 ft pushpole and 12 ft pushpole. The best thing is that it is as easy as the push of a button. All parts are made from super strong, lightweight fiberglass. Check it out over at Bending Branches for full info! 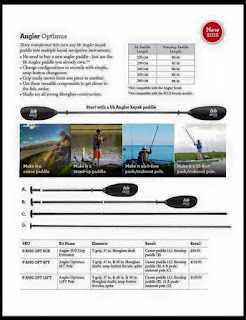 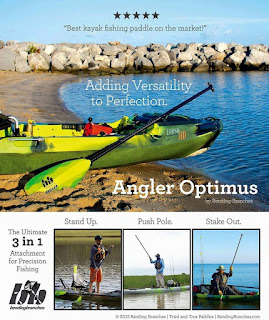 My affinity for Abu Garcia has been mentioned many times on this blog.  For years, I have been using their Orra S and SX spinning reels and love them.  They have been tanks, and for the money, they are hard to beat.  But the new Revo spinning line looks amazing and when my Orras die, I may upgrade a bit.  For some reason, I have always been a little reluctant to spring for a Revo S, because I think the upgrades you get when you splurge on an SX, STX, or better are just too hard to ignore.  However, I fully expect to have an SX or two in my arsenal within a few years.  Check out their intros here:  http://www.abugarcia.com/abugarcia-reels-spinning-reels/.

The Jackall Pompadour has been around for a year or so now and has been the cause of numerous topwater blow-ups since it launched.  It is a mutation of the old school Arbogast Jitterbug.  I just picked up a couple and love them.  They don't get a ton of bites, but the bites you get are big and ferocious.  Now, they come in a smaller version, which should be just as productive.  Check them out!

Glide baits have become super popular over the past few years.  That is because guys out west and in the swimbait world have been catching giants on them.  Savage Gear just released their new glide baits, which come in a couple different sizes and numerous colors.  I will admit that a lot of the custom and handmade swimbaits look better in the water, but this one looks pretty good, and costs a fraction of the price.  If you are looking for something new that catches big fish, this may be a good option for you.

I saw Jig Skinz first pop up on my Facebook feed and was impressed.  Others clearly were too, as it continued to show up on my feed for a few days.  Although it isn't widely applicable, it is a really cool concept.  See their video, below.


Got some beat up jigs and plugs in your bag? Slap them some skin and make them look brand new again!! - EK
Posted by Hook Shots on Thursday, July 16, 2015

The Big Bite Baits Fighting Frog has been my go-to flipping bait for the past year or two.  The Swimming Mama looks very similar, but with a little more action and slightly different profile.  I would like to see one in the water, but dang in looks appealing.  This is another bait that I will be fishing on an unpegged Texas rig.  I expect to have a few bags in my tackle box very soon!

Until next time, tight lines!
Posted by Drew Haerer at 7:40 PM