A few months ago, I got the idea of surprising Mary May with a trip to Ithaca, NY - the town where she went to college.  I decided to also run it by my good friend Bill (who is no stranger to references in this blog), whose girlfriend Courtney is also an Ithaca College alum.  Shortly after, we were planning a couples trip.  We put together an awesome to-do list of places to eat, waterfalls to hike, wines to sample, and shops to visit.  But no list could be complete without some fishing.  After all, Ithaca is situated on the south end of Cayuga Lake, a finger lake known for its vegetation and dock fishing.  Bill and I knew that the only way to squeeze it in would be to fish the first few hours of daylight each morning...and that is precisely what we did. 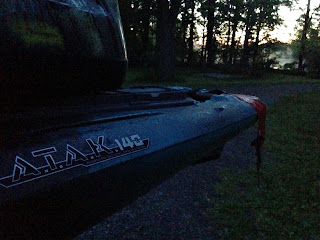 Loaded up bright and early at the rental


I had spent some time scouting the lake before the trip - examining Navionics, scanning Google Earth, and scouring message boards and websites for trip reports.  They certainly don't call it a finger lake for nothing - as it has almost a perfectly straight shoreline, with no coves or major creek arms.  And unfortunately, the south end fishing reports weren't terribly comforting.  The vast majority of bass anglers preferred the upper end of the lake, which was about an hour drive from our rental.  However, the southern end was supposed to have some smallmouth and pike fishing, so we would have to hope we could grind out a few bites.  The plan was to fan cast a large flat, which we suspected was covered with grass.  We would fish the flat out to a large drop-off, figuring that we would find fish scattered on the flat and bunched up on certain sections of the drop.  But mother nature wanted none of it, and we were forced to improvise.

We pulled up to the lake around 6 AM on Saturday morning to find 2-3 foot whitecaps rolling down the lake, due in large part to a constant, hefty wind blowing straight out of the north.  Plan A was out.  Instead we opted to paddle up Falls Creek, which was somewhat protected from the wind.  It also had a few side pockets and coves, although most of them were partitioned off with barriers - possibly to protect spawning areas.  Still, our hopes were high.  Sure enough, on cast number 3 I landed our first fish - a chunky 12" largemouth that hit a finesse worm in about 10 inches of water.  And from there, the bite never let up. 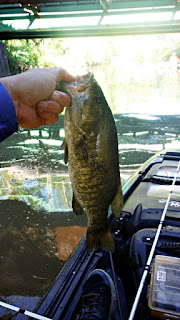 Most fish were situated around chunk rock, gravel banks, or laydows, and were eating a variety of baits.  We ended the day with 9 bass in about 2.5 hours of fishing, although we probably lost or missed another dozen.  They were split at about 50% largemouths and 50% smallmouths.  The big fish of the morning was a 3 lb largemouth that Bill caught, but he lost a really nice smallmouth next to the boat.  The best baits were green pumpkin finesse worms fished weightless, 1/4 oz Premier League Lures spinnerbaits, and 4.5" soft swimbaits.  I was also again impressed by the wind resistance, stability, and tracking of the ATAK.  It really shines as a lake boat. 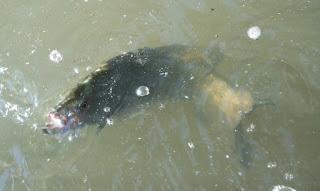 The next morning was a completely different story.  There was almost no wind, but a storm from the day before had caused the south end of the lake to get muddy, limiting visibility to only a couple of inches.  In hindsight, maybe we should have revisited Plan A, but instead, we decided to explore some other creeks and channels that run through Ithaca. 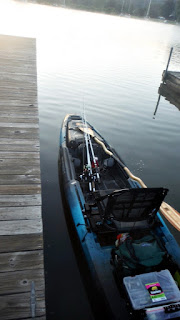 
It was urban bass fishing 101, casting to pipes, steel beams, concrete walls, and other man-made structures.  But, the Sunday bite proved to be a grind.  The only bait I could get them to eat was a black finesse worm fished very slowly, and there was no real pattern to where I would get bites.  Most were around rock or concrete, but others near wood or docks.  It was a post-front pattern at its finest.  Although we didn't get as many bites, the fish that did bite were mainly decent sized smallmouths - in the 15"-17" range. 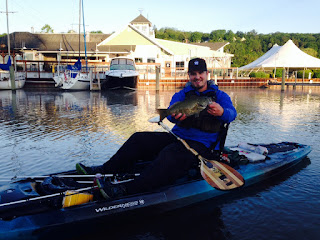 My biggest smallie of the trip


My advice for folks interested in bass fishing the Ithaca area would be to come up with a few plans based on the time of year, much like we did, and systematically try them all.  Definitely be wary of the wind and weather, which can be brutal when it blows down the lake.  Lakes like Cayuga change drastically between late April and late June, as vegetation emerges, fish go from pre-spawn to spawning to post-spawn, water temps change, boat traffic increases, and baitfish move to different areas.  Note that because of the shape, much of the lake won't always be terribly conducive to kayak angers, so plan accordingly.  However, I suspect that Cayuga is a very bassy lake, particularly up near Seneca Falls, and it certainly has plenty of beautiful water to explore.  Until next time, tight lines!
Posted by Drew Haerer at 11:57 AM