It was mid-morning and I found myself with a few hours of free time, a rarity these days.  It was a no brainer - I loaded up and headed for the water.  But in the back of my mind, I knew that this time of year can be tricky in New England.  Early to mid-June is the post spawn period in bass fishing.  It represents the phase after bass have finished mating and spend their time relaxing and recovering.  Coincidentally, at the start of the month I published a couple articles that talk about catching post spawn bass.  And trust me, I practice what I preach, fishing topwaters, jerkbaits, and finesse plastics around points, drops, edges, and isolated cover.  If all else failed, the lake I was fishing also has an abundance of chain pickerel, and I was hoping that they would keep my line tight if the bass wouldn't cooperate.  It was one of those days with a lot of variables, and experience made all the difference - eventually resulting in a pile of nice fish.

I launched amidst blue bird skies and perfectly calm water.  When I say calm, I mean zero wind, which is a rarity here in the Berkshires of western Massachusetts.  I knew the conditions would hurt the bite, but I was eager to test my skills.  I started by throwing a variety of 4 baits - a soft plastic jerkbait (fluke), finesse worm, topwater frog, spinnerbait, and bladed swim jig.  I eventually rotated in a paddle tail swimbait, lipless crankbait, and wake bait as well.  However, there was only one thing that was working early - a combo of the fluke and finesse worm.  The bass were hunkered down in deep weeds and reluctant to come out.  However, many would slowly follow the fluke and reveal themselves.  At times, I would see them come out and nibble the bait, literally just mouthing at it.  But that was all I needed to see.  I would reel it in and cast back with a finesse worm, then patiently wait.  They just couldn't resist the lazy, gyrating fall of the worm.  The first half dozen bass I caught were between 2 and 3 lbs - not giants, but not babies either.  I knew if the wind would turn on, it was going to get even better. 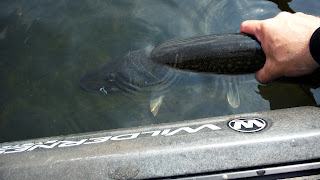 My biggest chain pickerel of the day


On the other hand, the chain pickerel seemed to care less about the weather conditions.  They were regularly eating the fluke fished slowly along weed lines and around emerging vegetation.  After a few fish in the 18"-22" range, I lost a giant that looked to be in the high-20s.  Then, my wish came true.  The wind picked up.  And the rest of the trip got insane.

I barely put down the fluke the rest of the day.  Instead of lackadaisically hitting it, bass were crushing it.  Pickerel were erupting on it at the surface.  There were times where I would catch fish on 5+ consecutive casts, and often a mix of the two species.  The key was to make the fish aggressive by playing to their instincts.  The wind is your friend when bass fishing, no matter how much kayak anglers (including myself at times) complain about it.  This is even more true during the post spawn.  You don't want fish to be able to see your bait perfectly, especially in the super clear water of New England.  You want them to simply react.  That is why a fluke is such a perfect post spawn bait.  You can fish it fast and get the fish amped up, causing them to react, or simply kill it, and make it look like an irresistible dying minnow. 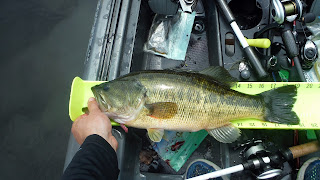 
I would find patches of isolated vegetation and throw the bait 4-5 feet past the far side of the patch.  These patches ranged from roughly 20 feet across to as small as 3-4 feet, and were a mix of dollar sized Lily pads (watershields) and emerging grass.  I would start by working the fluke slowly on the far edge of the patch.  But as soon as I got near the vegetation, I would begin to work it as quickly and erratically as possible, keeping the bait at or just below the surface.  If nothing bit by the time the bait reached the near side of the vegetation, I would kill it on the weed edge and let it fall toward the bottom.  Fish were hitting during all stages of the retrieve, with most coming a few seconds after I changed speeds. 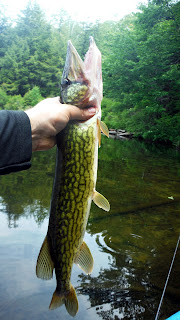 Chain pickerel are rapidly earning a special place in my heart


It was one of those days where you just shake your head and smile.  Blow-up after blow-up would be followed by witnessing fish rush out of the weeds and inhale the fluke on the fall while standing in the ATAK.  Eventually, I began calling my shots and even caught a few strikes on video, which were filmed with one hand while fishing with the other.

After about 4 hours, I had to head back to the launch.  I had just had my biggest chain pickerel of the day, a 25 incher, explode out of the water and devour the fluke, so turning around was not easy.  Thankfully, I had a hot date I couldn't miss.  Still, despite the great day, I had lost two jumbo pickerel and a 5+ lb bass, so I wanted a bit of redemption.  I stopped along a deep weed line on the paddle back to the truck and began working the fluke.  When it got to the near weed edge, I again killed the bait.  As I did, I saw a nice bass come out of the weeds, stare at the bait for a second, then open its mouth and suck it in...game on!  The fish wanted no part of getting in my kayak, as it made multiple runs into deep water, then back into the weeds.  I dialed back the drag on my reel as the fish darted under the boat.  Finally, I got the brute to the kayak and was able to lip him.  It wasn't the monster I had lost earlier, but the 19.25" fish was nothing to sneeze at.  I snapped a few pictures and let him go. 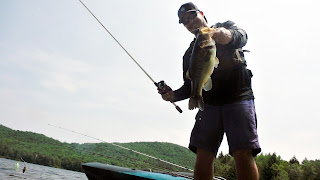 The fish capped off a day where I landed approximately 20-25 bass and probably 40-50 chain pickerel.  My biggest 5 bass went 92.25" and my 5 longest pickerel went 119".  It was another awesome day here in New England. 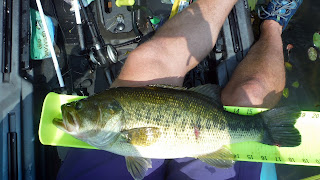 
In the past, I haven't been a big fan of fluke fishing.  It gets to be tedious and takes a while to perfect.  But I really enjoy fishing it around vegetation, because it is so versatile and there isn't as much wasted time and effort.  It is funny how all soft plastic jerkbaits are now universally known as "flukes", when in reality the Zoom Fluke is just one type of soft jerkbait.  I have come to prefer the Berkley 5" Saltwater Jerk Shad to other soft plastic jerkbaits.  I love the colors they offer and think it holds up better over the course of a day.  However, the tougher plastic probably results in a few more missed bites as well.  I rig it weedless and weightless on a 5/0 Gamakatsu EWG thin wire worm hook.  I typically fish the bait on 15 lb monofilament line, although I believe braid or fluorocarbon would also work fine.  I spool the line on an Abu Garcia Revo STX HS.  I prefer the STX HS because it is high speed (7.1:1) and has an awesome drag force for the price point.  I pair it with a Carolina Custom Rods Jerkbait and Topwater rod, which is 6'9" and has a particularly short butt section, making it easier to work baits all day without becoming fatigued.  It is also super lightweight and sensitive, allowing you to detect slight bites as the lure falls. 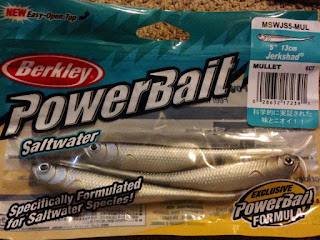 Mullet - it's not just for haircuts


Oh and that hot date, we headed east, caught an awesome concert, and had an amazing couple of days staring at this... 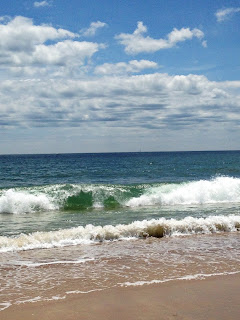 
Until next time, tight lines!
Posted by Drew Haerer at 1:51 PM