The ATAK has Landed - a Preliminary Review and First Trips

The hype machine is running full blast in the kayak fishing industry these days.  Unfortunately, not every product lives up to the billing.  It is one reason I encourage kayak anglers to try before they buy, no matter what type of product. One of the most hyped kayaks of the past year has been the Wilderness Systems ATAK 140 - a boat designed to be a super stable, all-around fishing platform.  After test paddling a prototype, I had to have one.  As the Wilderness Systems crew worked to perfect their craft, we all "patiently" waited for shipment notices.  Finally, the magic email arrived, and a few days later I had an ATAK in the garage.  Of course, the maiden voyage was soon to follow, and I walked away impressed.

Preliminary ATAK 140 Review:
Initially, I had a couple worries about the ATAK.  I wanted a big water boat that would perform well on large lakes, in the wind, and inshore at the New England coast, but with the added size came added weight.  The final version is listed at 86 lbs (92 lbs with seat), which is significantly heavier than any other kayak I have previously owned.  However, I found that although it is heavy, the molded carry handles made it fairly easy to move solo.  In fact, loading it into and out of the pick-up was a breeze.  I do highly recommend using a bed extender. I purchased a Boonedox T-Bone a few months ago and it has been great for loading and hauling longer kayaks. 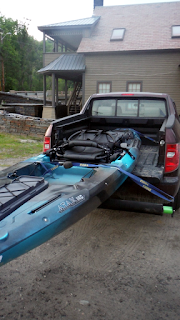 The Ridgeline is loaded and ready to roll

At 34" wide, the boat is insanely stable.  In fact, I had multiple people paddle up to me while on the lake and comment about how stable it looked.  One onlooker commented, "you aren't a small guy, but you are moving around with ease".  I took it as a compliment.  It is a fantastic fishing platform and deck space.  The other thing that really stood out about the hull design was the deck height.  At 15.5", it caught very little wind, which made target fishing super easy.  It also tracks very well in the open water and carries speed well.

I also love all of the GearTrac around the boat, as well as the FlexPod removable console, Conseal deck kit, and multiple storage compartments.  The FlexPod also fits the Thresher and will fit more (maybe all) future WS fishing kayaks.  The AirPro Max Phase 3 seat is insanely comfortable and has exceptional back and butt support.  At this point, I'm not sure how much use I will get out of the rear rod pod, but I like the concept.  I easily carried a decent size tackle bag full of plastics, 4 tackle boxes, 4 rods, and other miscellaneous gear...and had room to spare. 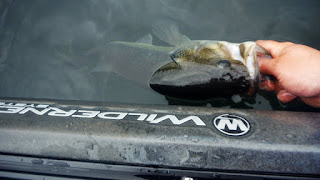 
Now for the cons.  First, I wish it came with accessories.  As is, I will probably end up adding at least 2 flush mount rod holders, 2-4 Mighty Mounts, some GearTrac, and a paddle clip.  I'll also have to pick up a couple more ZookaTubes. I really appreciate a clean deck and minimalist boat, but the ATAK left me wanting more.  The paddle holder bungee that is built in could use a little bit of fine tuning, as I don't love how it uses the same SlideTrac as the seat and also doesn't have a very deep paddle groove. Speaking of the seat, screwing and unscrewing the seat to the boat is cumbersome.  Given that it was designed to slide forward and back, I am not sure I could think up a better system, but it leaves something to be desired.  However, I did find that it is easy to carry and transport the seat with it bolted to the boat, unlike the Ride 115, whose seat I remove after each trip just in case.

The other cons are the obvious physical drawbacks of a big, wide boat.  It requires quite a bit of paddle power to get the boat moving from a stopped position, but as I mentioned, when it reaches speed, it maintains it quite well.  Still, it isn't going to be mistaken for a speed boat, although it will compete or outpace many of the wide fishing kayaks currently on the market.  It also doesn't maneuver extremely well, but again, there are trade offs between maneuverability and tracking.  And as I mentioned before, the weight is pretty high, but it is what it is.  The final thing I will mention is that the bow sits very close to the water line.  On choppy days, it is likely going to equate to some spray near the foot pegs and may benefit from scuppers in certain conditions.

Overall, I loved the boat.  I really want to be critical, and there are some things that I, personally, would change, but it is hard to argue with a good thing.


First Trip Fishing Reports:
Let me start by saying that I hate fishing on holiday weekends.  Really I hate fishing most weekends, which is why I gravitate toward remote rivers or other off the beaten path bodies of water.  But Mary May had to work on Memorial Day and I was home alone, so it was time to launch the ATAK.  I started at a fairly local lake in the mid-morning, and just after a passing shower.  Unfortunately, the pressure system stalled over the area for a while, and the bass just weren't active.  However, the chain pickerel were.  At times, it was like I couldn't keep them off the hook.  Although fun, the chain pickerel in that particular lake don't get terribly big, and eventually they got annoying.  I could see some spawning fish and knew a couple areas of the lake were probably loaded with bedders.  I just have no desire to target spawners, and kept fishing weedlines, laydowns, and and drop offs.  After a few short fish, I finally landed a solid bass on a long, rocky point.  He ate a fluke as I worked it over a boulder.  It was a start. 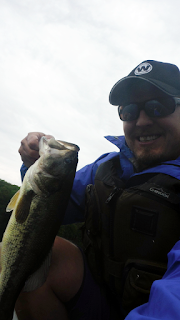 All smiles despite the gloomy skies. Also, I suck at selfies.


About that time, the weather began changing, and the bite was constant the rest of the trip.  I worked a weedline in 6-8 feet of water that was dotted with docks.  I was picking off bass here and there on a finesse worm and Rage Tail Craw.  Most were in the 12"-16" range.  Finally, the weedline dropped off even more - reaching about 12 feet.  I made a long cast to the outside post of a dock with my finesse worm, let it sink, and gave it a slight shake.  As I did, I felt a light bite and set the hook hard.  The fish was fighting oddly to begin with, and I suspected it was a pickerel.  But then it made a hard run toward the kayak and I caught a glimpse of a nice bass.  The brute pulled drag from my spinning rod as she towed me down the shoreline.  After a minute or two, I was able to scoop her into the boat as I stared at my largest Massachusetts bass to date.  At 21", she qualified for a MA angling citation.  I paddled about 20 yards down the shore to a cottage where I had seen a couple in the yard moments earlier.  I asked if they would snap a quick picture and they kindly obliged.  After a few Polaroids, I let her swim away.  Her tail was beat up and her nose scabbed.  She was skinny and clearly a late spawn to post-spawn fish.  Still, she had some serious shoulders and I couldn't help but wonder how big she was before the spawn.  Content, I finished off the trip with a few 1-2 lb largemouth before packing up and heading for lunch. 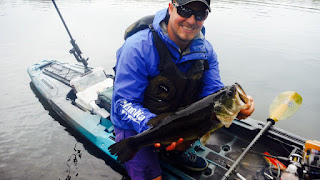 
Originally, I had planned to fish a second lake after lunch.  However, after ending the morning session on such a high note, I had mixed feelings about going back out.  But who was I kidding - I was going back out.  I decided to head for a lake that has plenty of big pickerel, including numerous citation size specimens.  So I wound my way into the Berkshires and launched around 3 PM.  A quick scan of the lake was slightly disheartening.  4 other boats, each with 2 anglers, were already out and about.  But it was too late to turn back.  Seeing that most of them were fishing very shallow, I started out deeper, throwing a BBB Cane Thumper swimbait and PLL spinnerbait over drops and patchy weeds.  This technique produced a handful of pickerel to 21".

Then I stumbled onto some big clumps of isolated weeds.  I caught a couple small bass on a finesse worm, then switched to a drop shot.  Although it didn't yield any big fish, it did produce 4 species - bass, crappie, yellow perch, and chain pickerel.  Unfortunately, the latter cut my line and I decided to stick with bigger baits.  Before leaving the spot, I took a couple more casts with a 5" finesse worm.  I got a light bite and presumed it was from a small pickerel.  But as I pulled the fish from the water, I realized it was about a 12"-13" Brook Trout.  The fish was latched onto the end of the worm, and as I lifted it into the air it let go and swam away.  It was one of the most strange catches I've ever had. 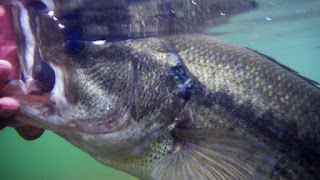 The rest of the day I mixed it up, and caught fish doing just about everything.  At times, I pulled up into a foot of water or less and would sight cast to roaming bass with a finesse worm.  Then I would pull offshore into the wind and catch pickerel and bass in weedbeds with spinnerbaits.  Next I would zigzag to the nearest wood cover and catch bass flipping a BBB Fighting Frog.  By about 6 PM, I had caught 30+ pickerel and about a dozen bass.  At that point, the wind had died down, so I kept it simple, alternating between a Premier League Lures blade bait and a fluke.  It became one of the most fun bites I have had in a long time.  Some fish would crush the black chatterbait.  Others would follow or miss it, so I would toss back a fluke.  Pickerel would erupt on the fluke time and time again, often slapping it into the air as I worked it fast just below the surface.  Some would slash and strike 7-8 casts in a row, while others only needed one chance.  It was nearly non-stop action until it was time to leave. 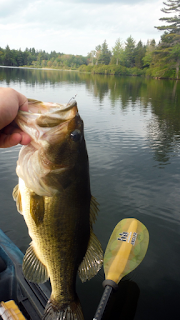 
Although the lake didn't give up any of the giant bass I know it holds, I caught 14 solid largemouths to 3.5 lbs and well over 40 chain pickerel to 24", in addition to the mix of dropshot panfish.  It was a great finish to an awesome first day in the ATAK.  The boat has some serious mojo!  Now I hope the encore performance can live up to the maiden voyage(s).  Until then, tight lines!
Posted by Drew Haerer at 11:56 AM