Sometimes you just can't resist the urge.  So last Friday I snuck out for a few hours after work to chase some bass.  I had fished this lake once before, but was eager to do a bit more exploring.  The day started fast, then proceeded to feed me a dose of humility. But before the sun set, the tables would turn.  The trip served as a great reminder for me - a "know when to hold 'em, know when to fold 'em", of sorts.  Here is what happened. 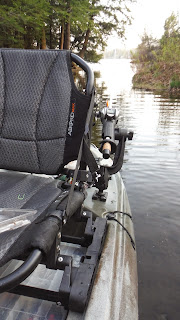 
With a water temp in the 50's, a moderate (but gusty) wind, and plenty of baitfish around the banks (mainly yellow perch), it looked like a textbook pre-spawn bite.  I picked up a spinnerbait, heaved it across a downed log, spun my reel handle a few times, and set the hook into the first fish of the day - a 14" largemouth.  "This is going to be easy pickins", I thought to myself.  Sure enough, two casts later I had fish number two in hand.  It was another small largemouth that fell for the Premier League Lures River Series spinnerbait.  Then I turned a corner, and my day changed.

I was greeted by two kayak anglers, both of whom had earthworms rigged on hooks below giant flourescent bobbers.  I looked down the lake and spotted four more kayak anglers.  Initially, I just went about my gameplan - chucking a spinnerbait to windy cover, throwing a jerkbait over weeds, and flipping a Big Bite Baits Fighting Frog to wood.  Unfortunately, nothing was working.  I'd have an ocassional follow or feel a bass pick up an arm of the Fighting Frog, but they wouldn't commit.  They were spooked and highly wary in the super clear water.  I was beginning to realize the impact of fishing behind other anglers.  Although they didn't appear to be catching any bass, their presence and choice of bait/rig were sending up red flags to bass in key shallow areas.  After switching all my baits baits, and watching 4-5 bass turn up their nose at my favorite finesse worm, I knew it was time for a change.

The first thing I did was move deeper.  I found a rocky shoal that protruded out of about 12 feet of water and reached the surface.  I began combing the edges with a coffinbill crankbait, and to my surprise, I was rewarded with two fiesty 13"-14" smallmouths.  Unfortunately, I couldn't keep the momentum going.  There wasn't enough weed cover or deep structure to find any consistent pattern and I was beginning to lose hope.  I took a second to think about similar situations I had encountered before.  Often, when chasing pressured or spooky fish, I either upsize or downsize by lures.  When I lived down south, I finally got to the point where I felt confident upsizing fairly consistently.  Unfortunately, my confidence isn't as high here in New England, so I downsized.  I switched out the Fighting Frog to a Strike King Rage Tail Twin Grub in green pumpkin.  I Texas-rigged it below a 1/4 oz tungsten weight.  Initially, I planned on flipping it to shallow cover, but that too proved to be ineffective.  So I began throwing it out deeper - making long casts and dragging or hopping it back to the boat. 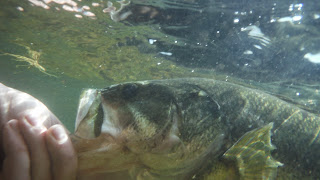 One of many bass released on the day


Suddenly, I picked up a fish.  Then another.  Then another.  I would hit flurries of 3-5 bass as I drifted down the shoreline in my Ride 115.  I noticed that no matter how good an area looked, it had to have a specific bottom composition.  The biggest key was gravel.  But it couldn't be only gravel or gravel and sand, it had to be gravel and either cobble or boulders.  Areas with boulders seemed to hold bigger fish, while areas with cobble had a higher quantity of fish.  It wasn't exactly your stereotypical pre-spawn bite, and certainly not how I had envisioned it, but it was working. 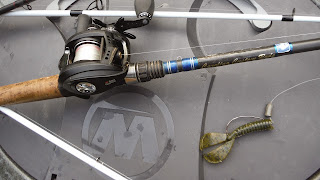 
Over the course of the next hour and a half, I managed 29 largemouths and 4 rock bass.  Most were in the 12"-15" range, but I did end up with a few nicer fish, including a 19" brute that took big fish honors for the day.  I was reminded of the Mike Iaconelli tag line, "never give up".  Sometimes, that means sticking to your guns and grinding it out.  Other times, it means knowing when you're outmatched, and coming up with Plan B. 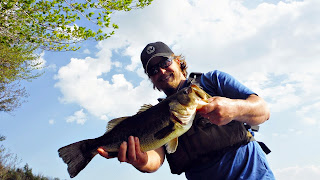 Getting this shot of the big fish lined up was brutal.  I picked a terrible day to forget my YakAttack anchor pole!


For me, it was a great reminder about fishing around other anglers and pressured fish, paying attention to detail, not making assumptions about the pre-spawn period, and using multiple pieces of information to make strategy decisions.  The day ended with 31 largemouths, 2 smallies, and 4 rock bass - I couldn't complain.  Days like that make me a better angler.  It also reminded me how much I still have to learn about these northern greenbacks.  Until next time, tight lines!
Posted by Drew Haerer at 11:17 AM