At long last, we drove by the local lake last Saturday and it was half melted.  The following Tuesday, it was 100% clear.  Grinning ear to ear, I knew that my first kayak fishing trip of the year would take place in the near future.  Needing some photos for an article with an end of the month deadline, I wanted to get out on a nice, warm, sunny day to fish and break out the camera.  So, I picked an afternoon that looked perfect, planned some time off, and rendezvoused with a friend of mine, Craig, who I also suspected was itching to hit the water.  Craig bought his first ever fishing kayak over the winter and was eager to try it out.  But as mother nature always seems to do, she threw a wrench in our perfect day.  Instead of 65 and sunny, it was 53 degrees and windy, with a "real feel" temperature of 43.  The wind was blowing a consistent 15 MPH and gusting to 25+ MPH.  But we looked at each other, shrugged, and launched without batting an eye.  The rest was up to the fish. 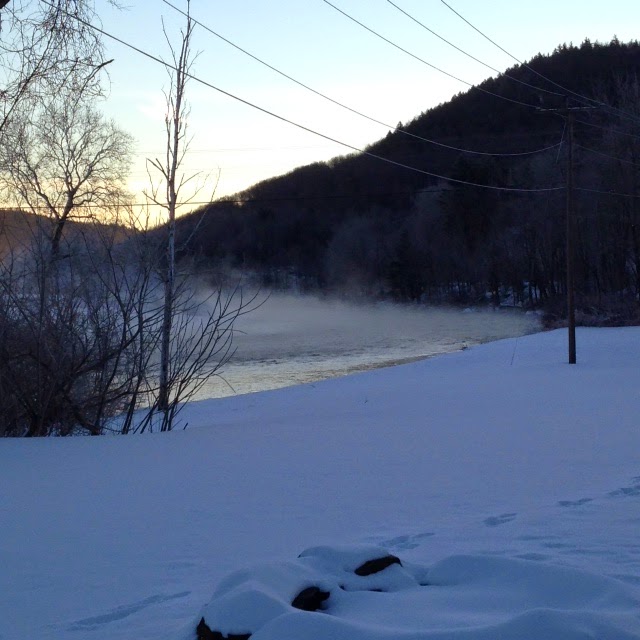 Winter was beautiful, but way too long!

Rarely do I use the phrase, "it was just nice to get out and throw a few casts."  Let's not kid ourselves - I take pride in catching fish in all conditions, not in simply casting and paddling around.  But after that long, brutal winter, I felt pure joy just dipping my paddle in the water. Speaking of the water, it registered a balmy 42 degrees.  I feel like I should invent a new metric for kayak anglers based on water temps and wind speed in the spring.  If the water temp (WT) minus the wind speed (WS) is less than 25, just stay home.  Now let's go mathematical.  If, 25 < (WT-WS) < 45, be prepared for a serious challenge.  From 40 to 60, the metric would get pretty complicated, but you get the picture.  On the first trip of the year, our WT-WS was 28 (not including gusts), and per above, it was a serious challenge.  And as if we needed to make things harder on ourselves, neither of us had ever been to that lake before.  We unloaded, rigged the kayaks, crossed our fingers, and launched.


I started off fishing fairly shallow and on initial drops with a jerkbait, lipless crankbait, and spinnerbait.  After 30 minutes, it was clear that the fish weren't shallow, nor were they active.  The only thing I did see were yellow perch - some in schools of hundreds.  They weren't big, but I was hoping it might be a piece of the puzzle.  I switched to a deep diving jerkbait, perch pattern shad rap, and small paddle tail swimbait.  I really wanted to fish a jig or drop shot, but the wind made it impossible from a kayak.  Thankfully, it wasn't long before the switch to the DD jerkbait paid off.  I cast parallel to a high cut bank, about 20 feet from where it met the water.  I slowly worked the jerkbait back to me.  As I did, I felt it deflect off of a submerged piece of wood, so I gave the bait a long pause.  As I began to reel, I felt the characteristic bite of a cold, sluggish fish. It feels more like dead weight than largemouth bass.  The fish slowly latch onto the lure rather than crushing it with reckless abandon, like what will occur in another 10 days or so.  Without putting up too much of a fight, I landed the 14.75" greenback and was happy to call it my first fish of 2015. 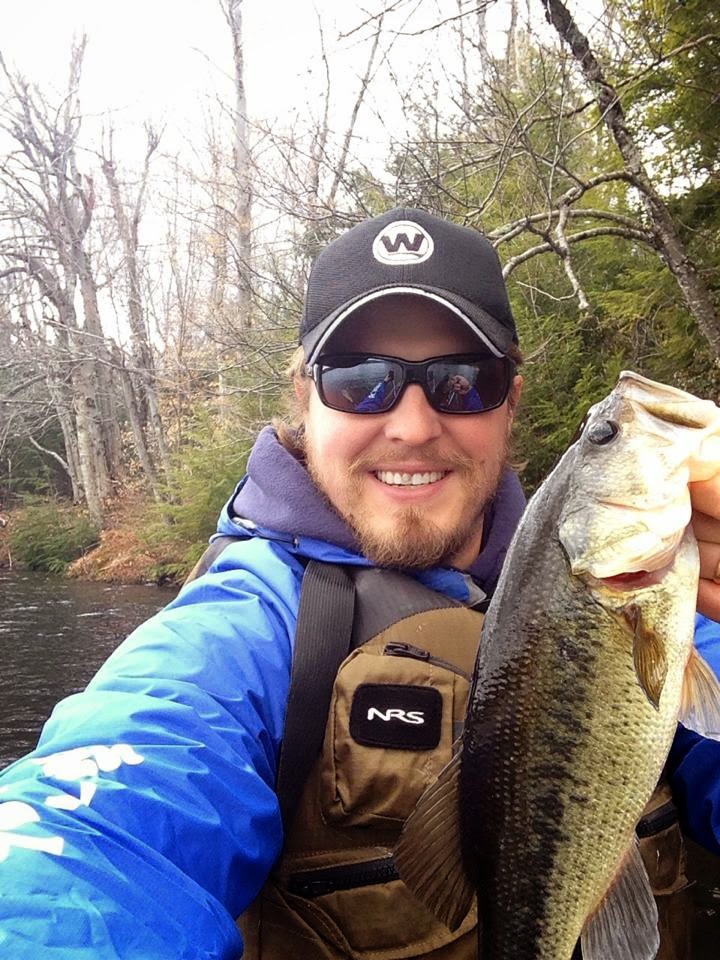 My first fish of the year - slimed!

I snapped a quick selfie and resumed fishing.  In truth, I hate selfies.  I've only ever taken a few, and they have either been with a fish or to document ridiculous facial hair changes during the shaving process.  Given the conditions, I figured a selfie would suffice, as Craig was on the other side of the lake.  I paddled back up to the spot I had just caught the fish, took another cast, and began slowly retrieving the bait.  During the early spring, a lot of largemouth stack up in key areas, so if you catch one, there are often more in the vicinity.  On this cast, I got no deflection, but I did slow my pauses to nearly 10 seconds.  Sure enough, in the same area, I got a thump.  This fish felt heavier and put up a bit more of a fight.  I saw him in the clear water and knew it was a solid fish.  Eventually, I maneuvered my fingers around the treble hooks and lifted the brute into the air.  The fish measured about 18.75" and was probably a little under 4 lbs.  I again snapped a selfie and let her go. 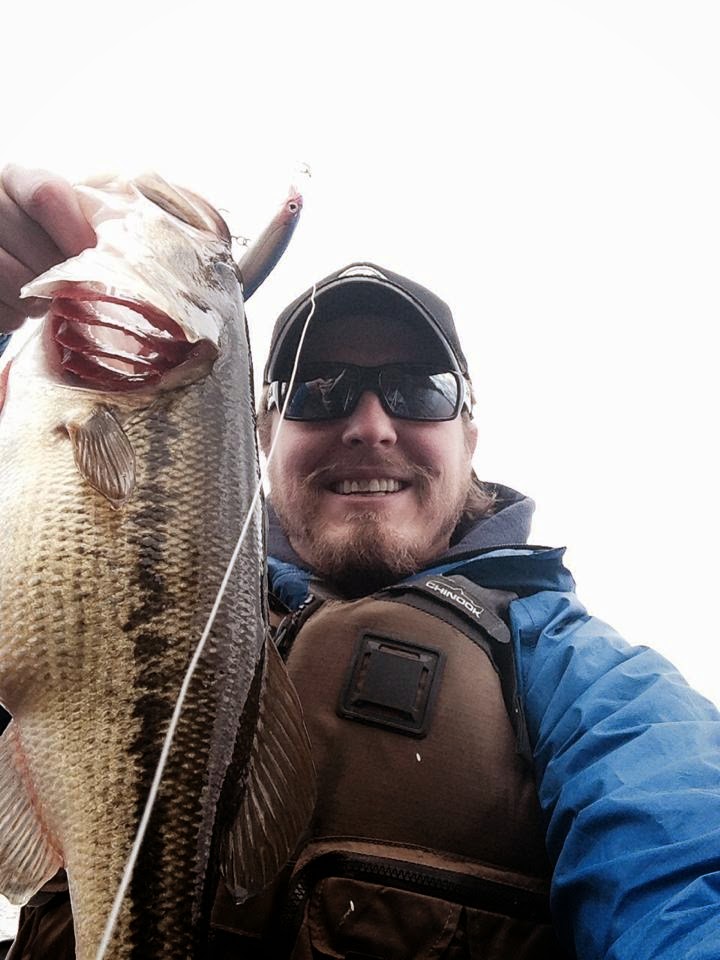 The big fish of the day and the DD X-rap it ate!

After a couple of fishless casts, I floated over the area where I had caught the fish and noticed a brush pile in about 8 feet of water.  If there is a better place for catching early spring bass than brush piles in 8-15 feet of water, I'd like to hear it.  I managed to hook one more fish on another piece of deep timber about 30 yards down the bank, but it managed to hang me in a branch and shake the hook.  About this time, the wind went from strong to nearly unfishable.  I was blowing faster than I could reel in my lure, making for very short, inefficient casts.  The lake was shaped like a finger, with almost no place to escape the building swells.  Before I knew it, we were both at the far end of the lake.  However, there was a small corner there that provided some protection and an adjacent pseudo-rip rap wall, to which I began casting.  I was throwing a flat sided, coffin bill crankbait, a favorite choice of mine for colder water or pressured fish.  Suddenly, I felt a fish slap the bait and get hooked momentarily, only to pull free.  After a few more casts, there was only one thing left to do, paddle back up the lake toward the launch. 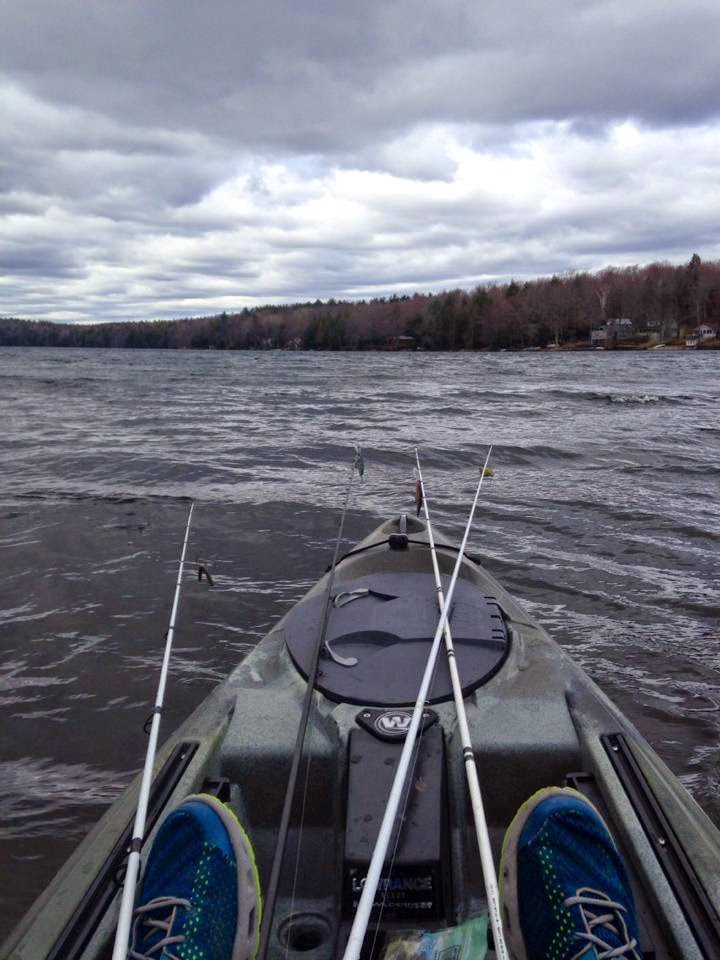 They are difficult to see, but the white caps were rolling on the main lake

I shuttered a bit as I watched white caps rolling across the 55 acre lake.  I snapped a quick pic and began paddling.  The BB Angler Pro was my savior, as waves crashed over the front of my Ride 115, spraying my legs and face.  Although it isn't the fastest boat, it actually handled the waves pretty well and I made better time than expected to a small sheltered area close to the launch.  Of course, I had to stop and fish the brush pile once more with Craig.  The wind din't make it easy, but I managed to get a cast in the vicinity, reel it to depth, give the bait a couple jerks, and then a very long pause as I adjusted my boat in the wind.  As I reeled up my slack I felt fish number 3.  His fight was nearly non-existent, but the 14" bass would have given me a 3 fish limit for the day.  Given the conditions, I was tickled pink.

We fished back to the truck, loaded up, and decided to go scope out a smaller, adjacent lake.  It also had a rip-rap wall, which we decided to fish from land.  It turned out to not be very kind to me - snagging one of my crankbaits that I couldn't get to come free.  But for Craig, it was a good ending to the trip.  He hooked a solid bass before it spit the hook right next to the bank.  Then he hooked another greenie, and this time, got him to shore.  It was a solid 14"-15" bass, which hit his lipless crank along a rocky point.  It was also a perfect ending to the day.

We certainly couldn't complain - 7 hook-ups, 4 fish landed, a free workout, and a great baptism by fire for our new kayaks.  A big kudos to Craig, who never even batted an eye at the rough conditions.  I really like the look of those lakes and suspect that they are going to be red hot in another 10-14 days - and possibly even better in mid-summer when the vegetation hits full strength.  Now it is back to reality - work, house building, writing, editing, necessary evils, and day dreaming about fishing for a little while.  Until then, tight lines!
Posted by Drew Haerer at 4:00 PM