Every year I end up blogging during the week of the Bassmaster Classic.  This year, I'm feeling inspired by the word "classic", as well as the fact that it is throwback Thursday.  I am going to throw it back to November 7, 2009 - the date of my first ever kayak fishing tournament win, which took place on Jordan Lake, NC.

It was a cold, foggy day, but that didn't stop a respectable field of anglers from braving the elements.  It was the first ever kayak fishing tourney in central NC, following in the footsteps of the inaugural Hardcore Invitational that had taken place in Charlotte a month or two prior.  I believe about 25 anglers showed up, which was considered pretty substantial back then.  I was in a 10' sit-inside kayak, which was the only thing I could afford in grad-school. I bolted a couple rod holders on the back, threw a backpack full of plastics on the front, and added a seat with some back support to really fancy it up.  On tourney day, I carried only 2-3 rods and a small tackle box, but I was beyond excited.  We gathered, snapped a few photos, and launched like we were blasted from the barrel of a shotgun.  I headed for a channel swing that pushed up against a rocky point, about a half mile from the launch.  I had found the spot on a map, and during practice the Saturday before, I caught about 10 bass without moving - including a few in the 3-4 lb range.  It was a one fish, big fish format, so I knew it would only take one good bite to win it. 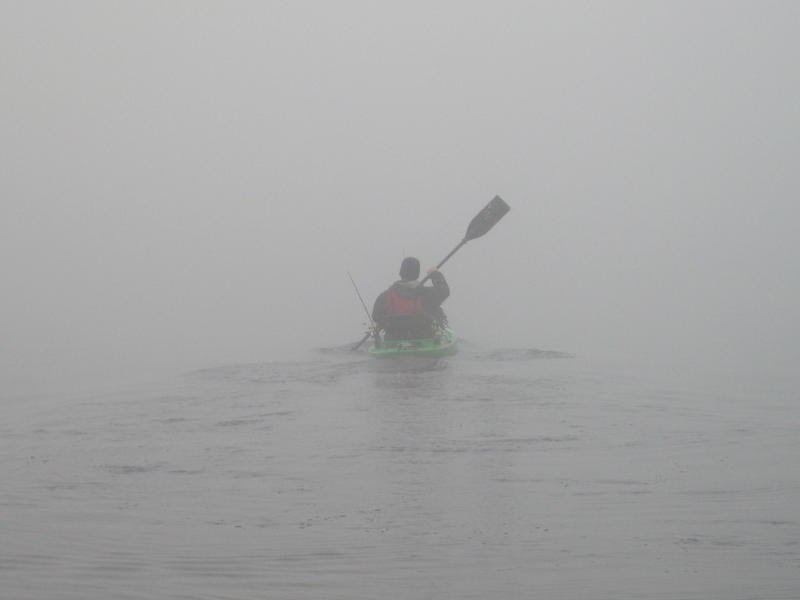 Paddling into the fog.  Look at that sweet paddle!


I began by throwing a medium crankbait and spinnerbait, but after an hour, I had nothing to show for it.  I decided to make a paddle to another area I had scouted - this one slightly shallower, with less chunk rock and more gravel.  But as I made my way around a nearby point, I swung my paddle and felt the blade hit a rock.  The collision was accompanied by a loud crack.  The blade had broken, and about 3/4 of it was missing.  I guess I should have expected as much from the $20 combination of plastic and aluminum.  I immediately called my buddy Gary, who had been there to watch the launch, but wasn't fishing.  Unfortunately, he had left shortly after the launch and was nearly back to Durham.  Panicking, I called the tournament director.  After some searching, no-one had an extra paddle.  Based on his recommendation, I made one of the craziest decisions of my fishing career.  I paddled the remaining 1/4 mile back to the launch with only half a paddle, loaded all my gear into my SUV, threw the kayak on the roof, and sped off toward the nearest sporting goods store.  It just so happened to be a Dick's Sporting Goods, located about 30 minutes from the lake.

I was doing the math in my head.  It was 9:30 AM when I left.  Add an hour of travel time, ten minutes to shop, another ten to unload, and twenty minutes to paddle back out to my next spot.  It ended up being about 11:30 AM before I threw another cast.  I must of looked half crazy - frantically running through the parking lot in multiple layers of clothing and rain gear, grabbing the first paddle I saw, and high-tailing it back to the lake.  By the time I got back to the lake and unloaded, I basically threw strategy out the window.  It was time to simply go fishing and try to laugh it off. 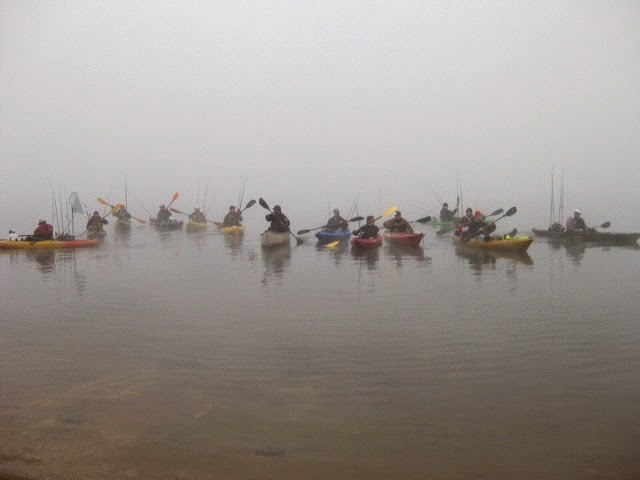 Some of the anglers who showed up to fish that day


I ended up heading north and fishing a long bank with mixed rock and clay, but that proved to be fruitless.  Then I came to an area with some larger rock and bedrock outcrops that abutted a shallow flat.  It was in direct sunlight and had a breeze blowing on it.  There was a pronounced drop there and I remembered seeing an old road bed on my lake map located somewhere in that vicinity.  I began cranking with a fairly shallow running chartreuse crankbait, and it didn't take long before I got a bite.  It was textbook.  I threw the bait to some shallow rocks, got a deflection after a few cranks, and had a bass crush it.  It was a 14-incher.  I wasn't skunked.  Now to upgrade.

Over the following hour I figured them out.  They were positioned along the drop - some in about 4 feet of water and others closer to 8 feet.  I floated the stretch, which was about 60-70 yards long, over and over again.  First, I upgraded to a 16" bass. Then I landed a couple around 15", followed by a couple short fish. Then, I finally got the bite I was looking for.  A fish crushed my crank after a deflection in deep water, and began pulling drag from my spinning reel.  I carefully played the fish and gave him plenty of time to tire.  I knew he was fairly big, but all of the fish I caught that day had fought extremely hard.  Eventually, I lipped him and swung him into the boat.  The fish was a skinny 18.5" and a great upgrade, but was it enough? 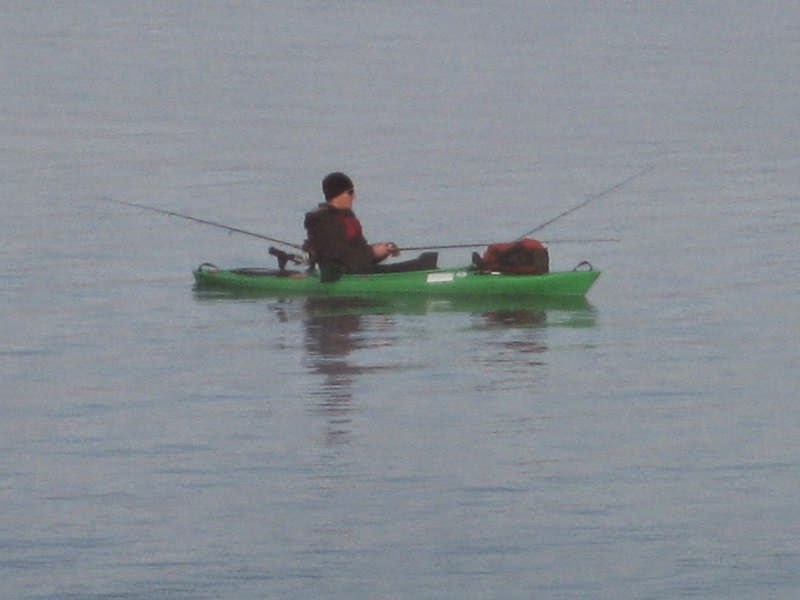 Cranking a point.  I've come a long way since then.


I didn't land another fish, although had I known then what I know now, I almost assuredly could have put on a deeper diving crank and hammered a few more.  I was giddy as I paddled back to the launch.  Jordan can be notoriously tough, and I was hoping she would send some good luck my way.  Much of the field struggled, and I believe only about 1/3 of the competitors landed a fish.  Thankfully, my fish was about an inch bigger than the next closest bass and took home top prize that day.  It was a fun story to tell as we stood around and conversed after the weigh-in.  That day remains one of my favorite kayak fishing moments, and proves the adage, "never give up."

Coincidentally, in my rush that day I purchased a 210 cm whitewater paddle, which I successfully returned a couple days later.  Shortly after, I bought my first Bending Branches paddle, which has seen many miles since.  And I still have the broken paddle.  I turned it into a trophy, of sorts, from that day.  Most that see it on the shelf have no idea what it is, which is another good excuse to tell the story.

Until next time, tight lines!
Posted by Drew Haerer at 12:11 PM