Note - this blog was written quite some time ago.  However, my camera battery charger went missing after our move and until recently I had no way to get the pictures off of my camera.  Thankfully, the new charger arrived and now I have to play catch-up on a number of blogs.  Thanks for your patience and for reading!

My North Carolina batchelor party turned out to be pretty awesome.  I got to spend a few days on the water, visit with great friends, and land a giant bass on topwater in one of my favorite small rivers of central NC.  Round 2 had a lot to live up to.  This time we descended upon central Pennsylvania - a stones throw from where I grew up.  One of my best men, Travis, is getting hitched in October and it was time to celebrate with him.  After a few rounds of trying to figure out where to stay, we got lucky and some friends of his gave us the OK to use their cabin for the weekend.  It is situated right on a large creek that feeds that Susquehanna and was perfect for what we needed.  And much like Round 1, it was nothing but fun.

Mary May and I rolled into Woodward, my hometown, late Thursday evening.  The drive from western Massachusetts is much shorter than from the Raleigh-Durham area - despite the efforts of the NY and PA Departments of Transportation, who seemed to be constantly slowing us down.  I had been texting with Travis throughout the day (only from the passenger seat, of course) and we had agreed to meet up early Friday morning to go catch bait.  Travis and his fishing buddies swear by a particular bait - the stone cat.  These miniature catfish live under rocks, are super sneaky, and are tough to catch.  The smallies love them.  I had helped him catch them once or twice before and had fished with them once for about 15 minutes.  Although I know they consistently produce big fish, I kind of like catching them more than I do fishing with them.  The only hiccup with that is that I am not terribly good at catching them.  It's not for lack of trying, but my stone cat catches tend to be more lucky than good.  Travis, on the other hand, is a stoney catching fool. 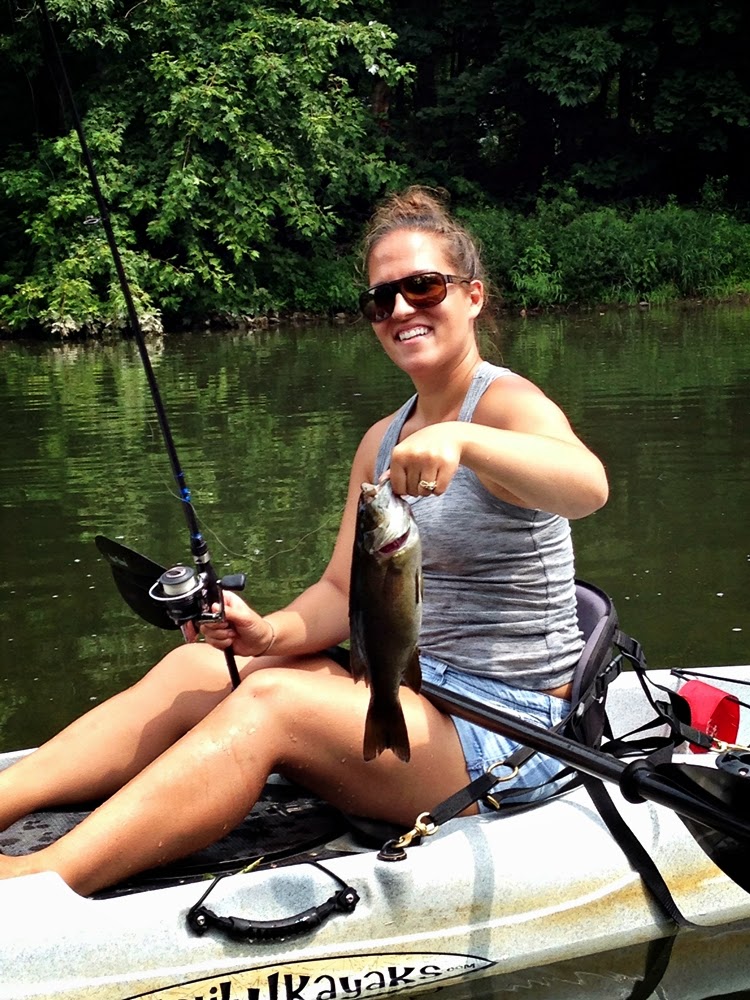 MM with a pretty smallie from the end of the weekend


We met him around 9:30 AM and started chasing the little critters.  Quickly, Mary May got addicted.  Something about being knee deep in the creek, flipping rocks and seeing what is underneath takes you straight back to your youth.  And no matter what you catch (or don't catch), you can't help but smile.  Crayfish, hellgrammites, and stone cats darted here, there, and everywhere.  Although our progress was slow, we eventually put a few in the bucket (to add to the batch Travis had already snared) and headed down to the camp to unload some gear.  The rest of the day was spent relaxing before other folks started rolling in to begin the festivities.  And Friday night was extremely festive.  I could write an entire non-fishing related blog about that night alone - so many great people and hard laughs.  We ate, drank, played quates (or quoits), did some night fishing and told fish tales until the wee hours of the morning.  That 6 AM alarm was about 3 hours too soon.

Amazingly, we all got up and moving fairly quickly...some of us quicker than others.  We loaded our gear and opted to head up the creek to a launch point roughly 7.5 miles above the cabin.  Some people would probably think we are nuts - fishing a little tributary creek rather than heading out to fish the famous Susquehanna River.  Travis and I have many a memory on the Susky too - most before the internet was in existence.  Some of our best days on that river are almost unbelievable - so I won't even go into it.  Let's just say, if you think the river is fishing well now, you have no idea.  Plus, there is something special about catching big fish from small water.  For me, it was even more special, because I hadn't fished that particular creek in about 13 years.  Admittedly, I romanticized it in my head before the trip even began.  But it really did live up to my imagination.

The crew included Ben - another of my best men who hadn't done much kayak fishing and hadn't fished at all in half a decade, Ken - a co-worker of Travis who is part of the PA Kayak Anglers and quickly becoming a yak fishing junkie, and Travis - who knows those waters as well as anyone and can put a whoopin' on some fish with or without live bait.  We arrived to find a light fog on the water, cloudy skies, and just the slightest touch of stain to the water.  We drug our boats down to the water's edge and I grabbed a small Rico Popper, took a cast, worked the bait 3 or 4 times and WHAM...fish on.  It was not a first cast jinx.  It was the start of something good.  The small bass wasn't much to look at, but it was a start.  I heard Travis say behind me, "See! What did I tell you?"  Apparently, his stories of our past adventures had garnered a mix of skepticism and bewilderment.  I smiled.  Then I proceeded to catch another one on the next cast. 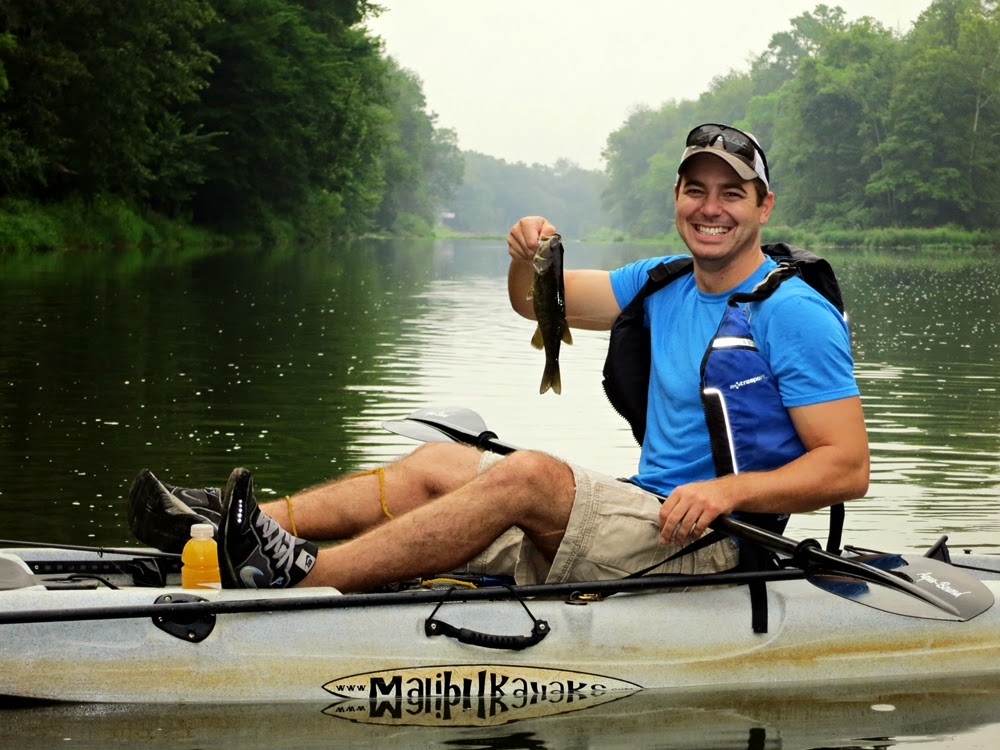 
Along with the popper, I tied on a 4" senko, a Jackall Bling crankbait and a Power Team Lures tube.  I wished I would have been tying on a Biffle Head Jig, but they are seemingly back ordered for an eternity at Tackle Warehouse.  Ben and Travis began the day using stone cats, while Ken threw a mix of grubs and plastics.  I drew a few more strikes from small fish on the popper, but their small size didn't make it any less fun.  I felt like a kid again, remembering pockets and boulders I had fished as a teen.  Ben caught 3-4 fish right out of the gate before losing his stone cat and deciding he wanted to switch to artificials as well.  I hooked him up with a 3" Berkley Power Bait grub (brown pumpkin body with charteuse tail) on a 1/8 oz jighead - aka one of the most effective smallie catching baits in history.  It didn't take long before we were both landing fish fairly regularly.  For someone who claims to "suck at fishing", he was doing pretty darn well.  We targeted riffles, eddies, patches of weeds, deep holes, and any isolated cover we could find.    Eventually we floated over a stretch of water I knew quite well from back in the day and I cautioned Ben that there was a hole that not many knew about hidden in the middle of a large weed bed on the left bank.  We quietly approached, cast, and BAM...fish on.  Then another.  Then a double.  Another double.  Another double.  It was getting silly.  Travis, who was with Ken about 200 yards behind us, floated down and said, "I knew you would stop here".  Honestly, I didn't really think other people knew about that little spot.  They did.  It even has its own name.  Oh well. 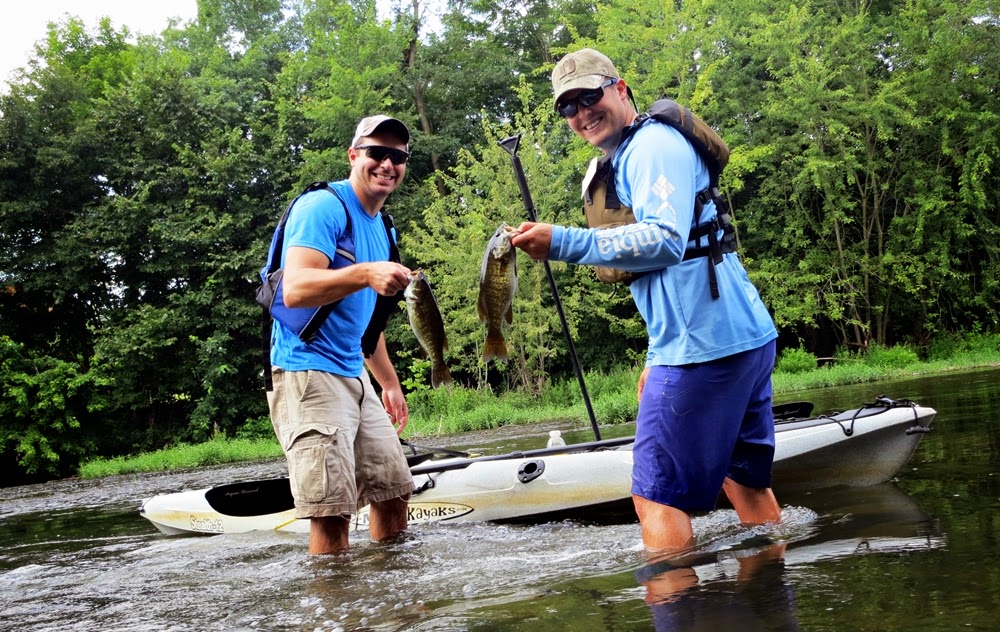 
Amid the flurry, we stopped only long enough to snap a few pics and send the fish on their way.  As soon as one bait stopped producing, I would switch to another and catch a few more.  At the end of a half hour, we landed well over 20 bass and lost at least 10 more - 2 of which were really nice fish.  We eventually called it quits on that spot and continued floating to try and keep up with Travis and Ken, who had floated past us to the next deep hole.  It was about this time that I broke out the sparkler rig.  I've debated whether to blog about the sparkler rig because of how much I like fishing it, and how much I don't want every yahoo out there to also fish it.  It is unique and smart and that is why it works.  I originally saw the sparkler on a TV fishing show.  It was quietly spliced in as a piece of local knowledge.  It went by a different name, but after rigging one up and showing it to Bill, the sparkler is the name that stuck...and it seemed fitting.  It looks like a gimmick, but man does it catch fish.  In fact, the rig helped Bill finish in the top-12 of the B.A.S.S. Open on Douglas Lake back in May.  And, much like it did on this day, it catches good quantity and quality of fish.

When I wanted a bite, I would throw the senko.  They gobbled it up.  In riffles, they would nail a drop shot rig with wreckless abandon.  But when I wanted a bigger bite, I threw the sparkler.  On a creek where the average smallie is around 10", it was consistently catching 14" fish...consistently.  Many fish would hit it on the fall.  Others would eat it as I hopped/swam it across the bottom.  It was so extremely fun.  Meanwhile Ben switched to a senko and was picking up bass as well.  He ended the day with 20+ fish landed and quite a few more that spit the hook.  Not bad at all for a kid who hadn't fished in years.  Travis wasn't putting up the same numbers that I was, but his stone cats were producing the best quality fish - with 3 over 17", including the biggest which was a fat, 18" pig. He also had a couple big ones snap his line.  Creek fishing at its finest. 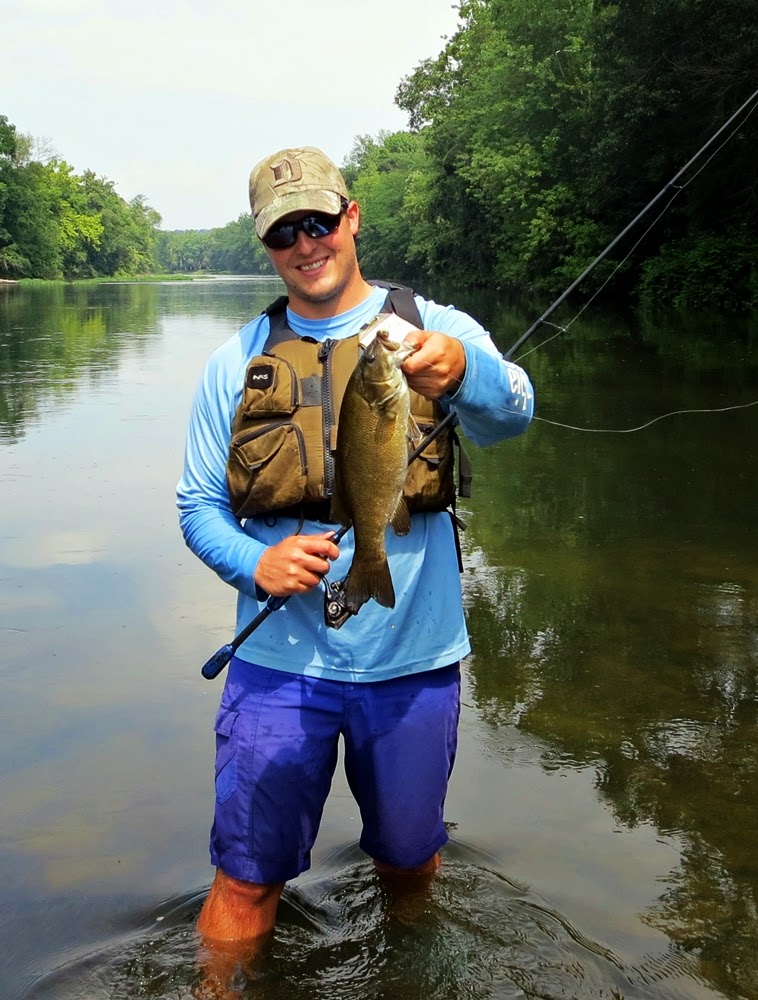 
Spurned by hunger and the heat, we did less fishing and more paddling over the last couple miles of the float.  I did manage to lose another nice smallie just before the take-out and caught some solid fish with regularity as we went.  When it was said and done, I landed over 60 smallies on the day and shook off numerous others that were dinks (an angling term for small fish).  My biggest few were around 15"-16".  I just couldn't connect with the big bites.  Then again, I didn't work overly hard for the big bites either.  The day was more about having fun.

It was mid-afternoon by the time we reached the take-out.  Exhausted, we devoured some food, re-hydrated, and took a nap.  That night was much more tame.  The over-30 crowd has trouble staying up late two nights in a row.  But we did manange to do some bowfishing.  We aren't overly good at it, but it sure was fun.  I can't thank Travis enough for such a great weekend.  Also a special thanks to everyone on 'party row' along the creek who welcomed us like we were old friends and treated us great all weekend.  These weddings are going to be a blast!  Until next time, tight lines!
Posted by Drew Haerer at 2:49 PM