Bassin' with the Catch of a Lifetime

As many probably know between my posts here and on Facebook, I got hitched!  On September 6th I took myself off the market and married my best friend and love of my life.  We did as much of the wedding as we could ourselves, which meant lots of early mornings and late nights.  It was a long, but fun process.  The only downside of a DIY wedding is that it really cuts into your fishing time.  The week after our wedding was spent honeymooning in the Dominican Republic - half vacationing and half fighting off stomach bugs.  Then the next week was spent catching up on work, writing 'Thank You' notes, and just recovering in general.  Then finally, a day cleared up on the schedule.  It was time to go fishing!

A panoramic from the Berkshires


As we twisted our way west into the Berkshires, I realized that I had underestimated just how long it had been since I fished.  I hadn't wet a line in over a month and a half and hadn't fished in western Mass. since late-July.  We arrived to find cool water, dying lily pads, and vegetation that was quickly becoming dormant.  Fall had arrived and wasn't wasting any time.  But the sky was clear and sunny, making it pleasantly warm.  We started around 10 AM and despite my hesitation about throwing topwaters so late in the day, I just couldn't resist.  I started throwing my new favorite frog (the Deps Basirisky) while Mary May worked a Lucky Craft Gunfish.  It didn't take long for MM to hook up along a weed edge.  The short largemouth wasn't a giant, but it was a start. 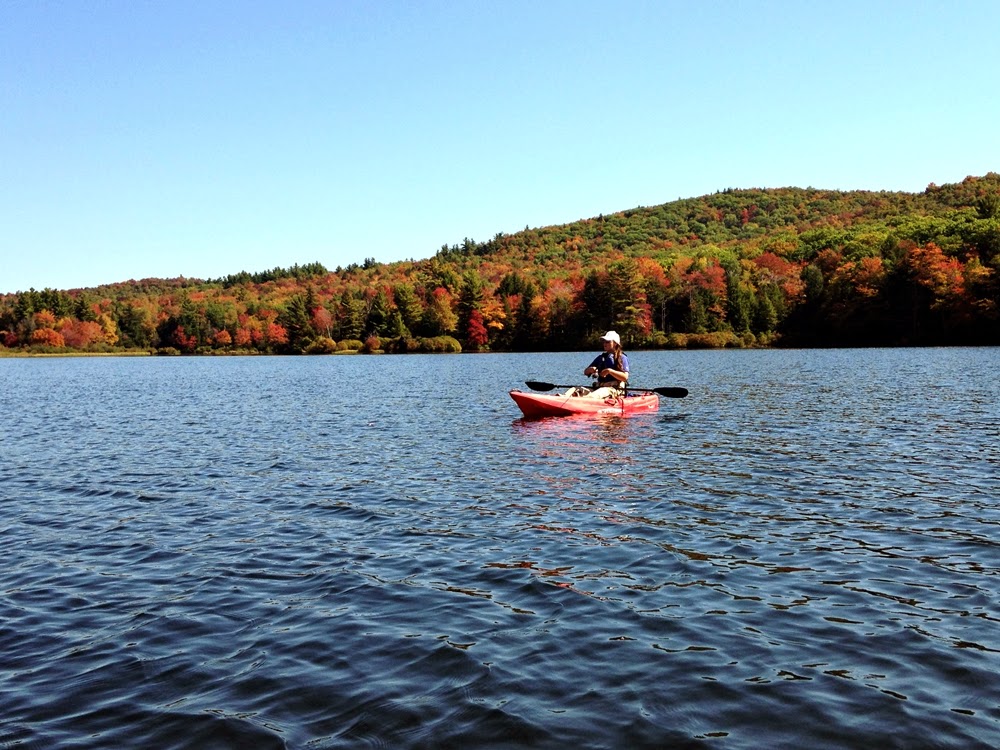 MM fishing in front of a beautiful backdrop

We decided to paddle across the lake and circle back around toward the launch, since we only had a couple hours to fish before heading to a farewell dinner.  We took in the gorgeous surroundings as we paddled.  The fall foliage is starting to really kick into gear and it is stunning.  In the first ten minutes on the far side of the lake I had two nice fish, one a 4-5 lb bass and the other a big pickerel, blow up my frog, but not get hooked up.  They would be my only frog bites of the day.  But I did manage to get a few strikes on a sparkler rig (see previous posts as to what that is) and an LC Gunfish.  MM also picked up a few bass on her Gunfish. 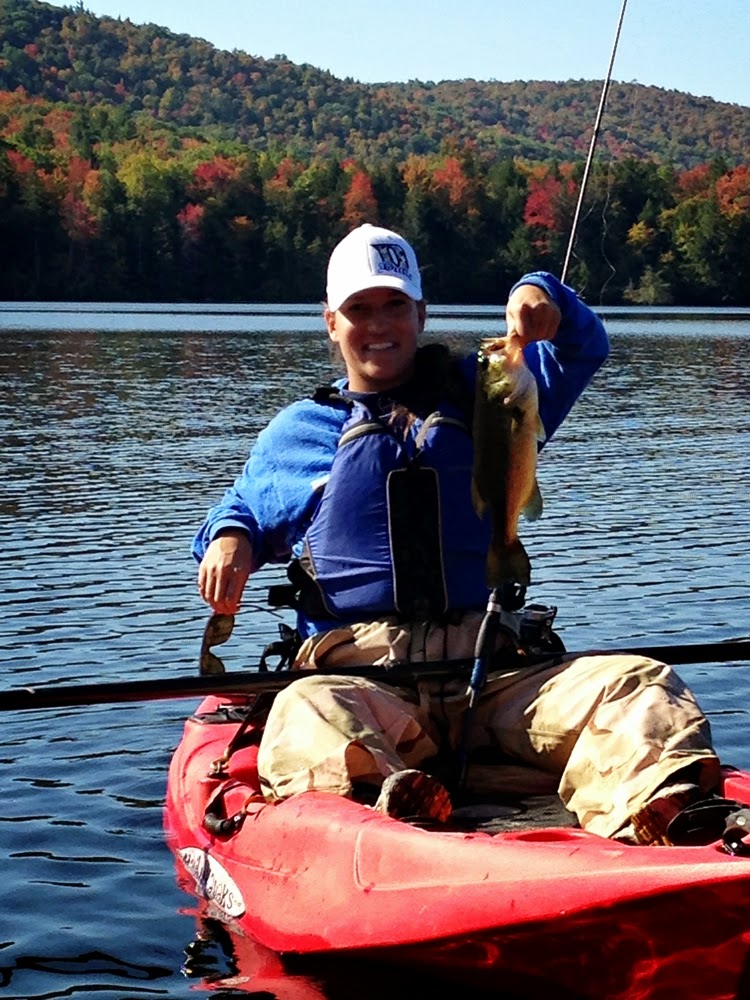 A chunky topwater bass for MM


Then the topwater bite died.  I mean it totally shut off.  So I started flipping and MM started throwing a jerkbait.  I spotted a large, submerged boulder on a drop off, pitched to it, and immediately felt a good bite.  The fish crushed the sparkler rig and was pulling hard on my 7' Carolina Custom Rods - Jig & Worm rod.  It was a fun fight in the clear water and eventually I lifted the 4 lber from the lake.  As always, we snapped a few photos and sent the fish on its way. 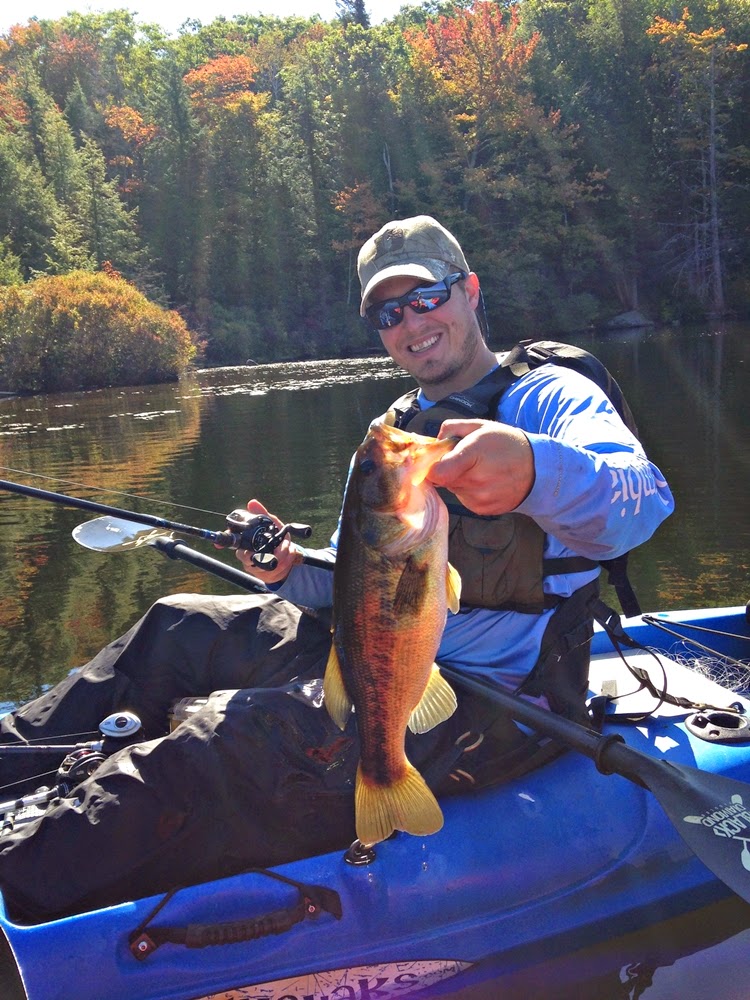 My biggest bass of the day

Then we came to a shallow portion of the lake.  The waterline was already about a foot low and combined with the lack of significant shallow vegetation, it meant that it was time to move offshore and fish jerkbait and lipless cranks over weed beds.  The move worked like a charm.  MM was catching fish right and left on a Lucky Craft Flash Minnow SP - an assortment of bass and pickerel.  I was trying to keep up - throwing a Spro Aruku Shad and Lucky Craft Pointer jerkbait.  All of those baits were producing and the fishing were coming in flurries as we drifted over areas with subsurface weed clumps. 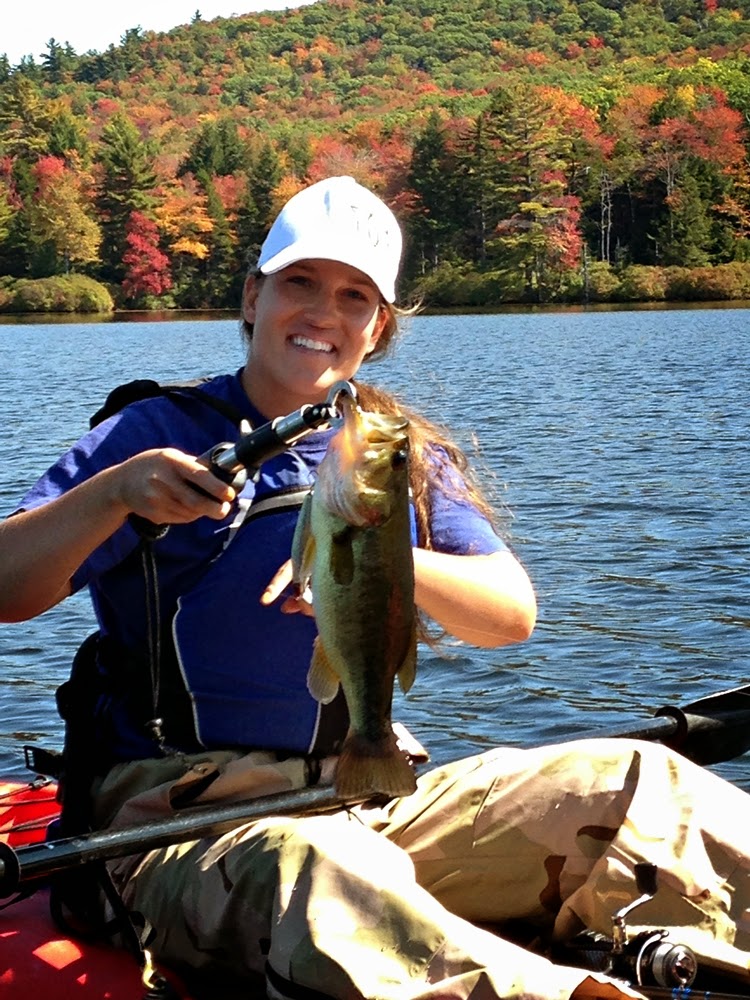 Then came the bite of the day.  I saw Mary May make a long cast and almost immediately set the hook.  I chuckled, saying, "you weren't messing around with that hook set".  "This one wasn't getting away", she responded.  But it wasn't for lack of trying.  The fish bulldogged her deep, then broke the surface, then deep again and into submerged vegetation.  Finally, she wrangled the fish and let out a cheer of joy.  The 19" bass was a healthy 4 lbs - a new personal best for her.  She was elated.  I was a proud husband.  It was a great exclamation point on our first fishing trip as newlyweds. 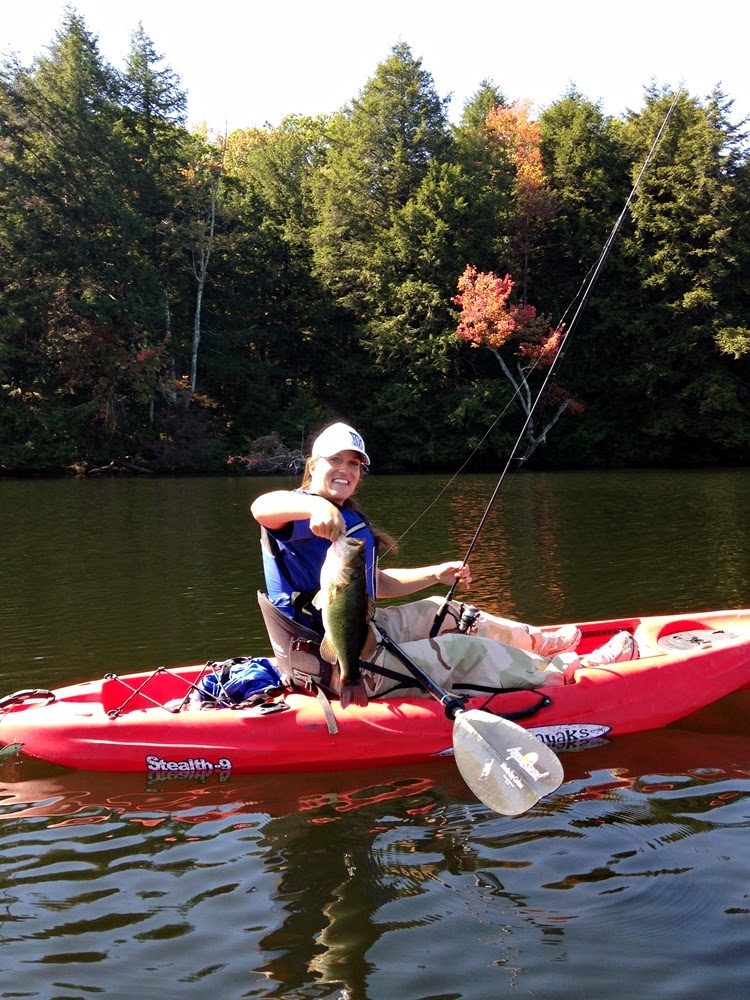 We did throw a few more casts and land a few more fish, but nothing picture worthy.  We got to brag about our day with numerous folks at dinner that evening.  Then the next day, we celebrated with homemade pizza, Patriots football, and a couple cold ones.  It was the type of weekend we both needed. 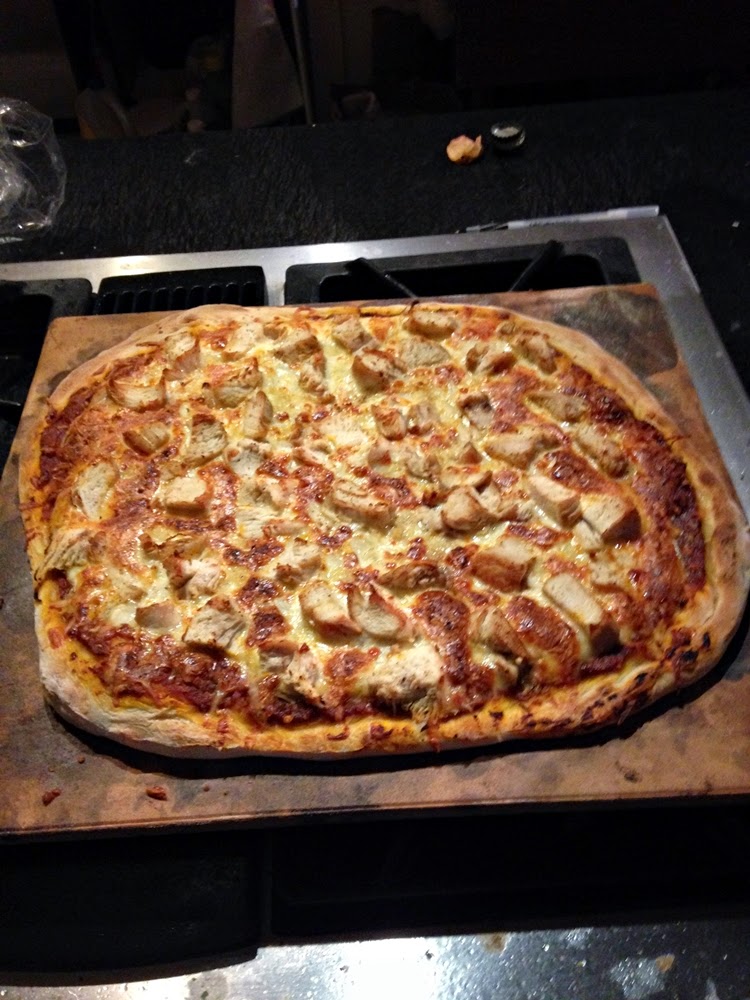 
Now it is time to get in as many trips as possible, because winter will be here before we know it.  Until next time, tight lines!
Posted by Drew Haerer at 4:30 PM