Lake Icanttellya - named after a famous Mohican Chief of the eastern Berkshires.  OK, not really.  It is just a small, public lake hidden up in the hills that is already fairly busy and doesn't need added pressure because they read about it on some guys blog.  So for the purpose of anonimity, the lake will remain nameless.  But I will tell you that it is a gorgeous lake with mixed vegetation, pockets of lily pads, and some tapering points.  It is a fairly shallow body of water and perfect size for a 3 hour paddle fishing trip.

Sunday was poised to be a prime fishing day.  It had been hot, humid, and sunny for 4 days straight, but storms were predicted to roll through in the late afternoon.  The pre-front conditions were cloudy, breezy, and...perfect.  Instead of having to dissect the thick vegetation in search of often scarce bites, I expected the fish to be out on weed edges feeding aggressively.  They were.


We started around 11 AM and made the paddle across the lake, figuring the wind would slowly blow us back to the launch.  The theory was great.  In reality, the wind switched directions multiple times and we constantly were adjusting our yaks.  But as easy as it could have been to curse the wind, we knew it would help the bite.

I pulled up in a small cove and started casting around some vegetation with a swimbait.  Mary May started a little deeper, throwing a 1/4 oz, white and chartreuse Premier Leagure Lures River Series Spinnerbait over a weed bed.  On my second cast I saw the swimbait disappear and set the hook into a 12" pickerel.  He wasn't much to look at, but it was a sign of things to come.  Shortly after I moved into deeper water as well and began throwing a swimbait and lipless crank.  The weeds were just too thick for the dual trebles of the lipless crank, so I tied on a topwater.  Shortly after, a cast to a long point yielded my first largemouth of the day - a nice 14" fish.  Seconds later, Mary May exclaimed that she was hooked up.  The fish nailed the bait on the fall and was pulling drag.  She eventually wrangled in the 15-incher and was all smiles. 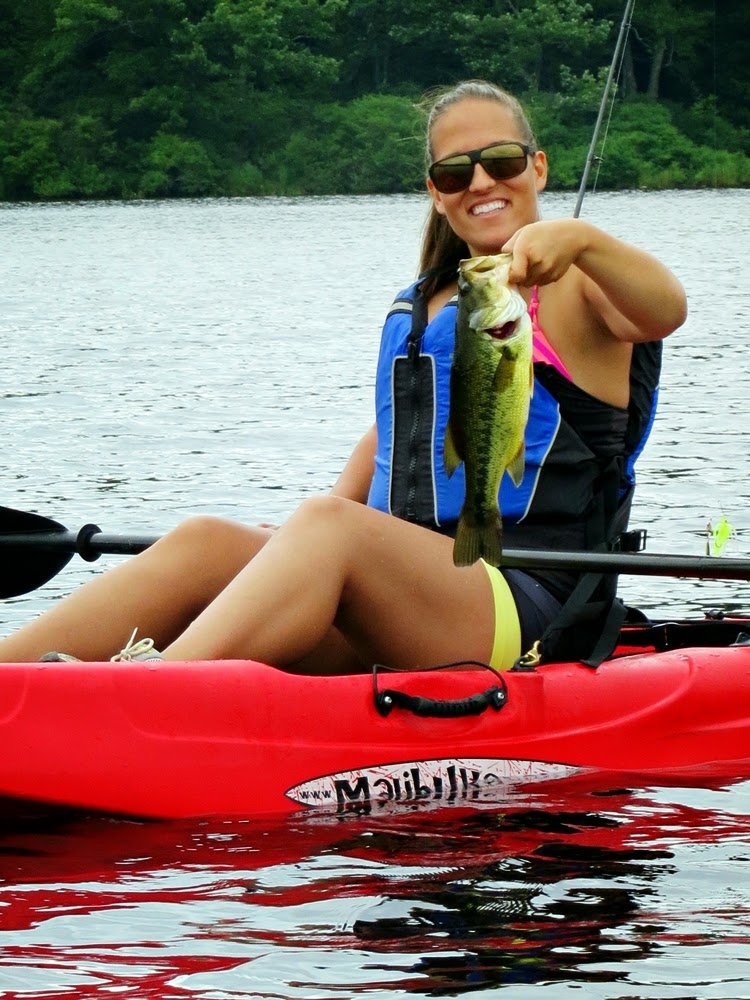 Mary May gets on the board with a healthy bass

A few minutes later she was hooked up again.  The fish was bulldogging her through the weeds to deep water.  Then it started running at the boat and lept from the water.  As it did, the lure sailed helplessly through the air.  The fish was big - easily over 5 lbs.  We both let out a scream of angst.  "I feel like I am going to throw up", she said.  "Wait until it happens during a tournament", I responded.  The feeling of losing a giant is brutal.  It takes the breath from your chest and then punches you in the stomach.  It would have easily been her personal best largemouth.  But as I told her, you never know when you will get that redemption bite.

I made my way toward some blowdowns that reached into deeper water and quickly landed a 16" bass on a green pumpkin colored finesse worm.  The fish was gorgeous and put up a heck of a fight for a lake bass...not that I am biased to river fish or anything. 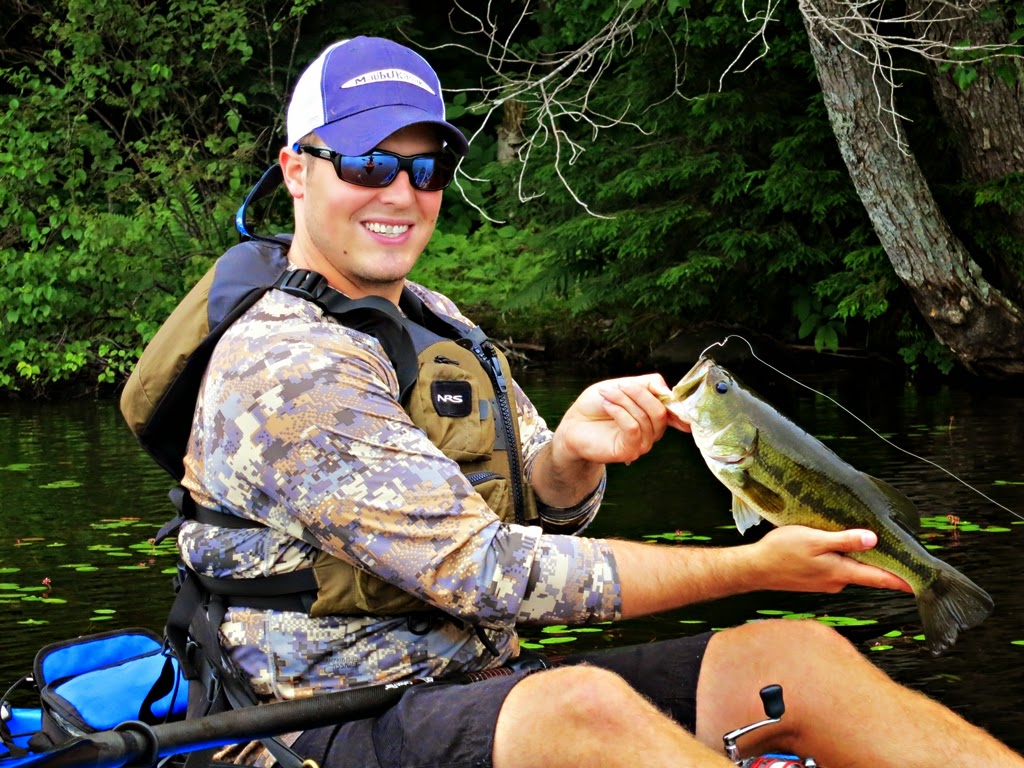 How perfect is that backdrop?

Then we began fishing around the outside edge of some weeds and with random patches of mini-lily pads poking through.  I landed a few bass and pickerel on my topwater bait - a Lucky Craft Gunfish.  Then Mary May let out a yell.  She was hooked up with what she thought was a solid fish, but it had run her into a massive clump of vegetation and would not come out.  After a short tug or war, she was able to leverage him from the grass and get him in the boat.  It was a healthy 3.5 lb bass, which tied her personal best largemouth from a kayak.  "You never know", I told her again, smiling from ear to ear. 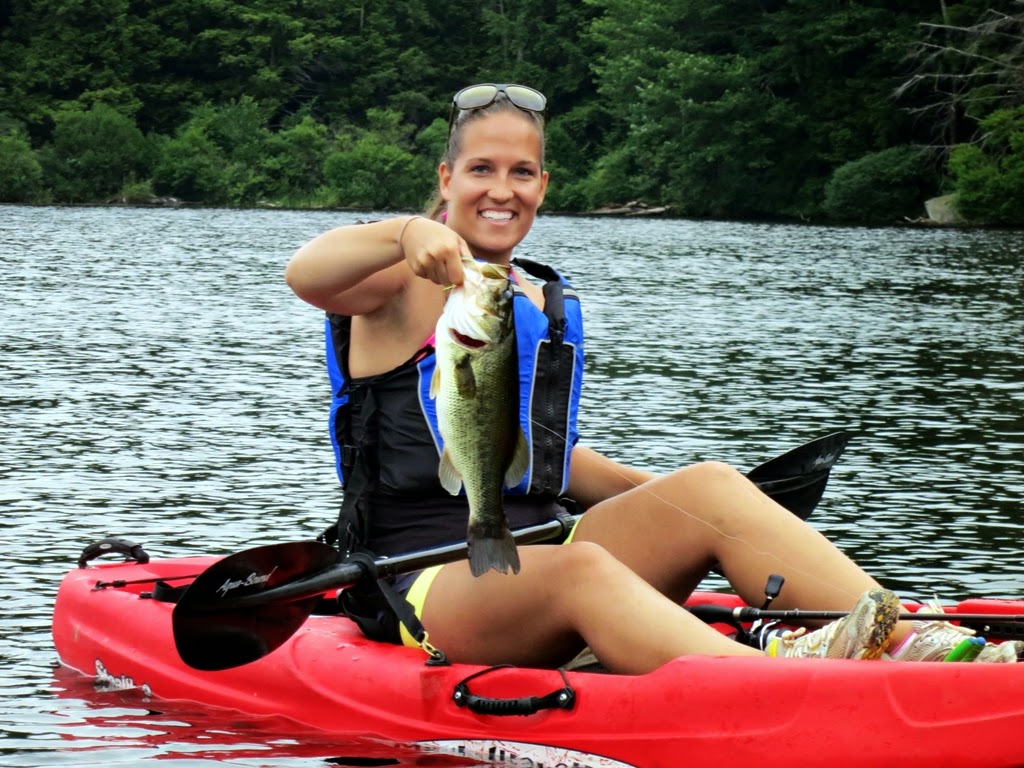 
I continued to work weed edges and at this point was only throwing topwater.  The wind and cloud cover was perfect for the Gunfish, which I can walk, spit, and pop at different speeds.  I was landing fish fairly regularly, including a couple pickerel that pushed 20".  Then it happened.  I made a long cast over the deeper part of the weed bed and began twitching the bait back to the boat.  I regularly pause topwaters when I retrieve them and on this particular cast, I paused longer than normal about mid-way back to the boat.  Suddenly, on the dead stop, I saw a massive head and body of a pickerel come out of the water and suck down the bait.  I could tell the fish was big, but had no idea how big.  The fish thrashed and pulled drag as I kept pressure on him as best I could.  He made multiple attempts to run under the boat and bulldogged me for what seemed like a half hour.  Finally, he got close to the boat and I could see my bait lodged in its mouth.  My line, 12 lb Sufix Mono, was visibly rubbing against his teeth.  Thank goodness I had brought my lip grippers, which were in Mary May's boat.  She paddled them over to me and with a sigh, I lipped the giant.  It nearly spanned the width of my kayak and had a massive head.  I was in slight disbelief.  Carefully, I dislodged the lure from his mouth, noting the multiple cuts in the line.  Then we snapped a few pictures, took some measurements, and released the monster back into the lake.  He went 28" and roughly 6 lbs - my biggest chain pickerel by a long shot and big enough to qualify for a Massachusetts Trophy Fish Award.  That makes two trophy catches in as many months.  I was beyond stoked. 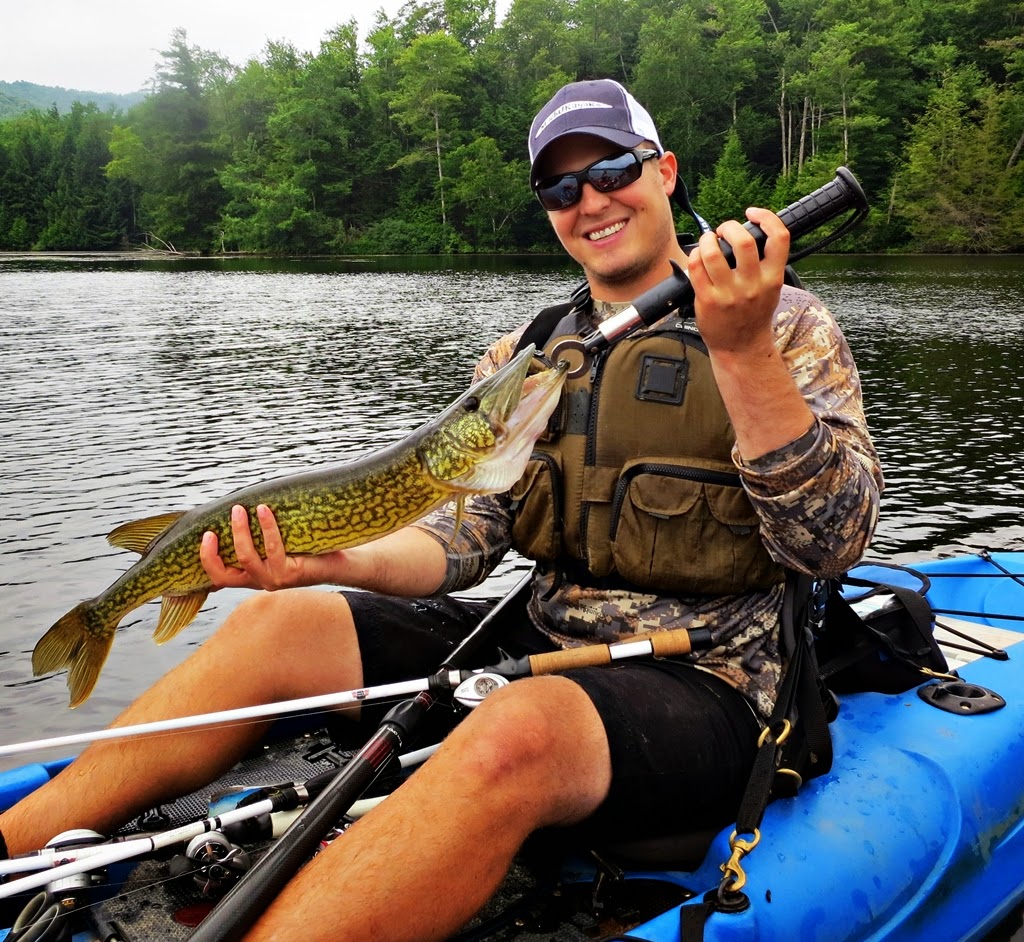 But the day wasn't done, in addition to about a dozen small pickerel that came unbuttoned for us at the boat, we found a few more solid bass to round out the day.  Our 5 fish limit was right at 17 lbs - a number I would have been happy with on many a tournament day.  My biggest fish was one of my last.  I stood in the Stealth in a pocket protected from the wind and made long casts with my finesse worm to holes in the patchy weed bed.  I threw the bait toward a particularly dark patch of weeds and felt a nearly immediate tap on my line.  I set the hook and the fish blasted toward deep water.  It pulled huge strips of drag from my spinning reel and kept making runs under my kayak.  Finally, I reached down and lipped her.  She was thick, heavy, and extra dark from living down in those weeds.  At 4 lbs, she was my biggest MA largemouth so far.  Vacationers at a lake house saw me catch her and started asking questions.  Before I knew it, there were 3 people bank fishing and 2 kayaks launching.  Combined with the other lake traffic, that was my cue to wrap it up.  I did land a couple more bass in the short distance between there and the launch, prompting one guy to run down the bank and ask the inevitable question of, "what are you using?".  I kindly obliged. 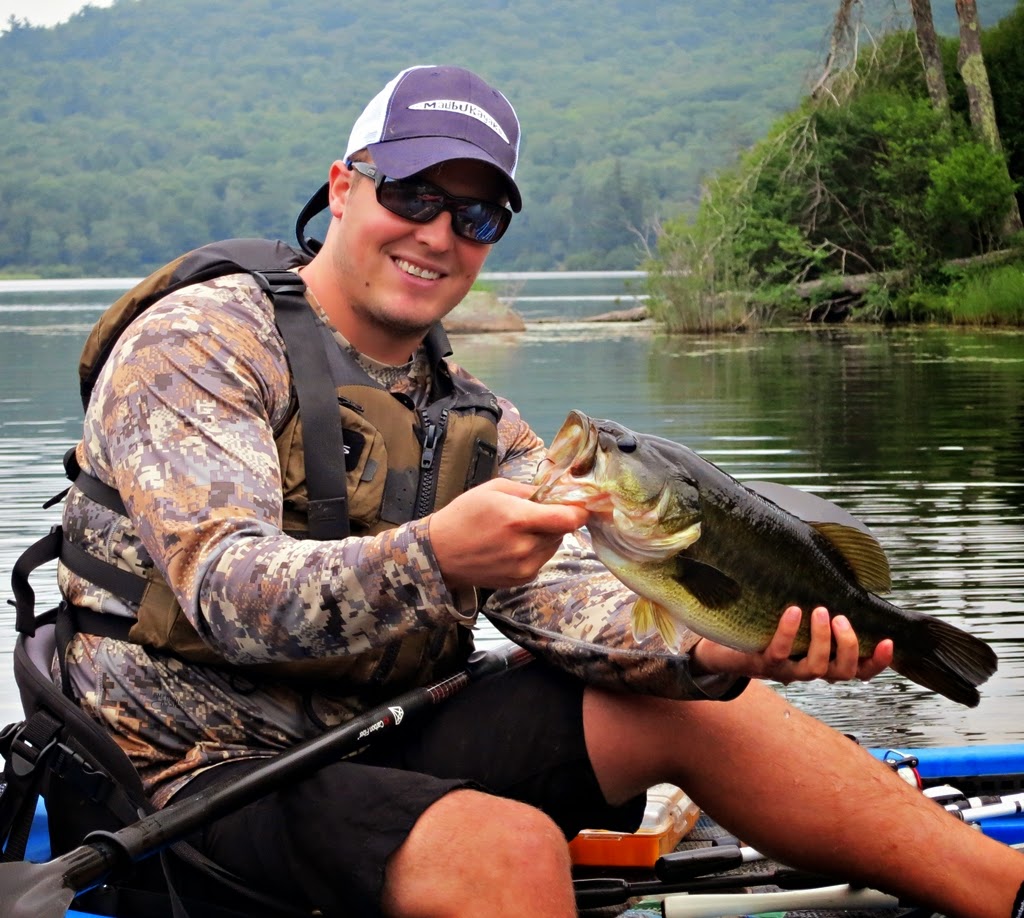 The south ain't got nothin' on northern largemouth like this!


By 3 PM we were back home and taking care of wedding chores.  It was one of those days that won't be forgotten any time soon - personal bests, quantity and quality, and the one that got away.  Now, I just have to wait for the weekend to come around again.  Until next time, tight lines!
Posted by Drew Haerer at 3:05 PM