To say that we have been busy would be the understatement of the year.  It has been one thing after another - a mix of necessary evils, responsible evils, and fun trips.  Included in the list of things I had never done before was driving a tractor, haying, legit whitewater kayaking, and catching smallies in Massachusetts.  I have caught plenty of smallies in plenty of places, but had yet to wet a line in smallie waters here in the Bay State.  Sunday, I decided it was time to remedy that. 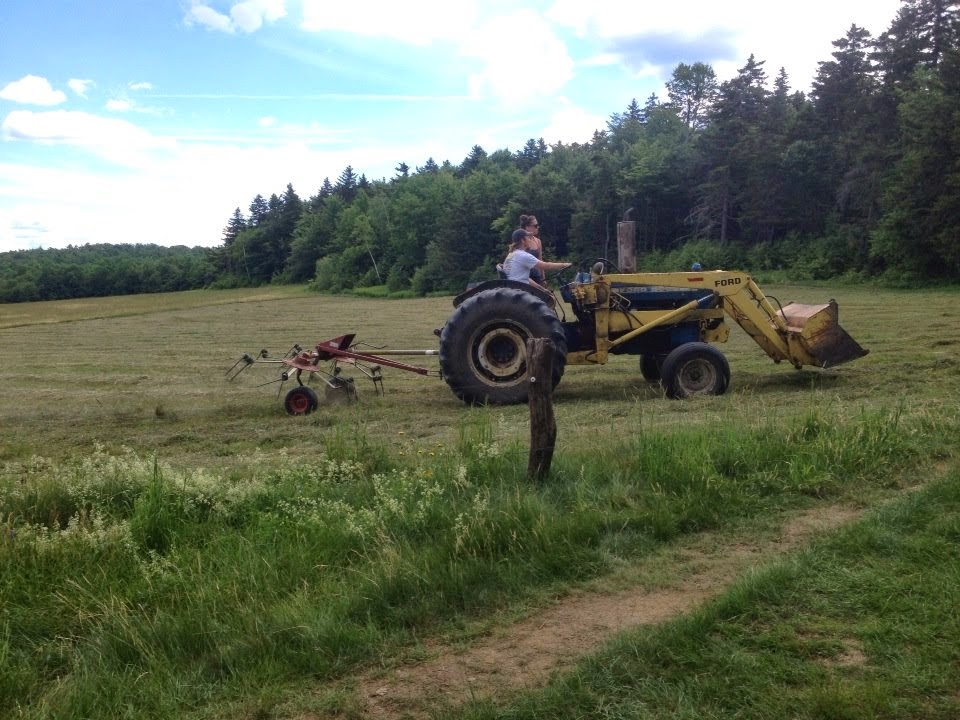 First time driving a tractor...didn't even hit anything
I wanted to fish the lower stretch of the Deerfield River near its confluence with the Connecticut River.  The stretch is a popular stretch for float tubers and rec kayakers and I'm sure sees plenty of fishermen too.  But kayak fishing isn't terribly popular here yet, so I also suspected that we could put together a 4-5 mile float and do quite well.  However, both the Deerfield and CT are heavily influenced by hydroelectric dams.  For kayak anglers, this means that the water needs to be in the "sweet spot".  If the level is too low, you are going to be doing a ton of dragging.  If too high, you aren't going to be able to slow down long enough to fish.  If just right, you lucked out, but you need to be very wary of the release schedule because your window of opportunity may be short.

I pulled up info for the lowest dam on the Deerfield and it was releasing with the gauge below it reading around 1000 CFS.  It was expected to drop as the day went on, but still, fishing a small river at that flow can be tough.  So I decided to head over to the CT and scout a few sections of water there.  If nothing else, I knew there were a couple spots big eddies I found on the map that should produce even if the water was running.  We got to the first spot I wanted to check and found a small, public access.  It was about 50 yards from the pull-off to the water and as we made our way down a path to the river, it was evident that the water was not running and the area looked extremely fishy.  However, it also had obvious signs of being a public area - lots of footprints, fishing lines, worm containers, and other traces of humans.  Still, we figured we could paddle up or down river to get away from that, so we loaded the yaks and launched.

I gave Mary May a 3" Berkely Powerbait Grub to start - probably my favorite all time smallie catching bait.  I was switching between a crankbait, tube, and finesse worm.  We were fishing all the right places - shoals, isolated rocks, current seams, deep eddy pools, and pipe discharges, but we couldn't buy a bite.  Eventually, I had a fish chase and swipe at my crankbait, but I am fairly sure it was a shad that was still hanging around after the big spawning run occurred in the weeks/months prior.

Finally, I threw the finesse worm along a deep bank, let it sink, and BAM - I had a bite.  It isn't hard to tell when you hook a smallie.  They are probably the hardest drag peelers of any of the black bass species.  Although my first MA smallie wasn't a giant, he fought hard.  It turns out he was hanging out around a submerged log and couldn't resist the fall of my worm. 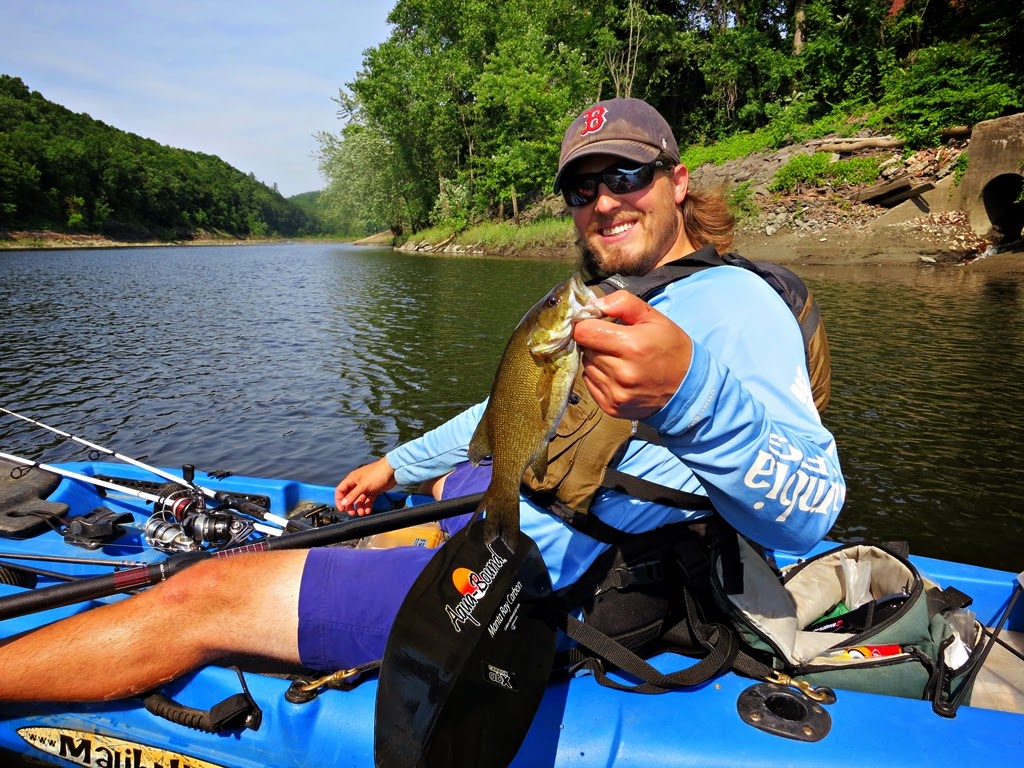 My first MA smallie and first smallie of 2014

As we continued on, I tried a few different lures and picked up a couple more short fish on the finesse worm and crankbait.  The wind was gusting fairly hard at times, making it difficult to see submerged targets.  Thankfully, it stopped long enough for me to stand and spot a ledge that dropped from about 6 to 15+ feet.  I made a long cast down the ledge with a Power Team Lures Food Chain Tube in the Susky Slayer color.  There was no denying the strike - a solid thud and immediate run to deep water.  The fish was pulling me toward him and swimming circles around the boat.  Every time I tried to sit he made another drag peeling spurt.  Mary May noted the awkward smile on my face, asking whether it was caused by the joy of hooking the fish or nervousness of landing him.  "Both", I exclaimed, with an even bigger smile.  Eventually I managed to make my way to the seat, but the fight continued.  The 7' Carolina Custom Rods Jig and Worm spinning rod was doubled over and taking the brunt of the battle.  Finally, I managed to wrangle her to the boat and scoop her into my lap.  I wiggled my thumb into her mouth and lipped her with a sigh of relief.  The FCT jighead was stuck squarely in her upper lip.  The fish was a thick, 3+ lb smallmouth, in the 18" range.  We snapped a few photos and sent her on her way. 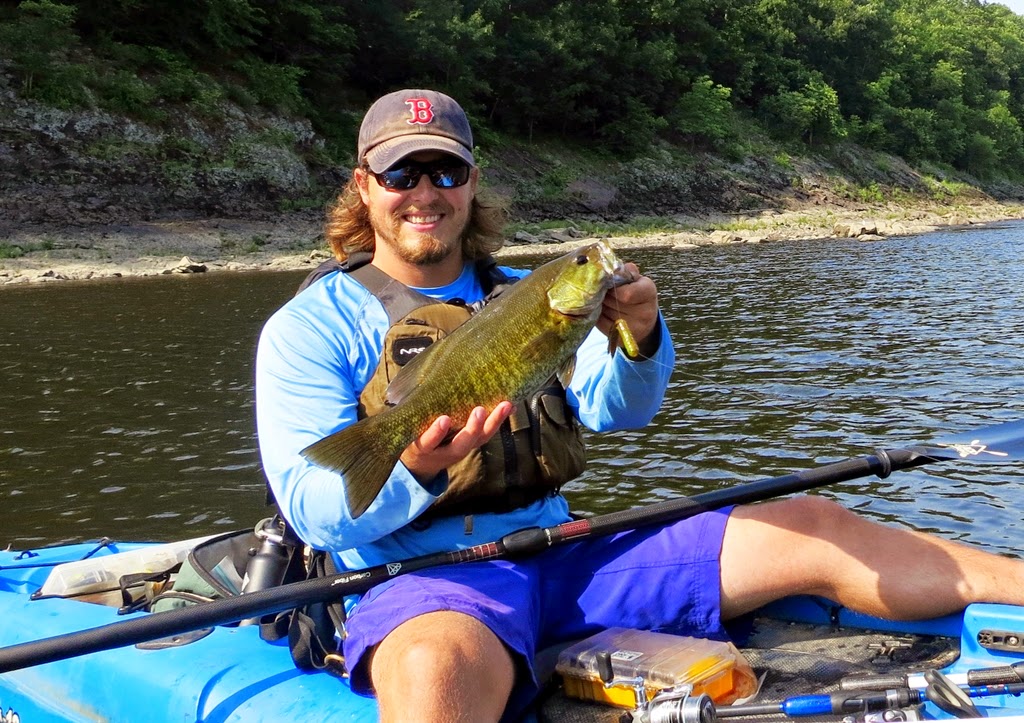 Tubes - they always seem to get it done!


My day was made, but we fished a while longer.  I shook off a couple short fish before hearing a loud announcement over a PA system.  We coulnd't make out any of the words, but immediately I wondered if it was time to release.  Usually you get about 30 minutes between the time the horn sounds and the time the water is physcially released - per federal law.  Then about 10 minutes later we heard it again, then again.  We decided to turn back down river and fish toward the launch.  We heard one last announcement then nothing.  After another 10 minutes or so, I looked down river and noticed that what had previously been an exposed shoal was quickly going underwater.  Likewise, a small chute was turning into a true rapid.  It was time to head back to the launch, which thankfully wasn't far and the Malibu Stealths handled the flow with no problems.  By the time we got back, the water had risen about 2 feet.  It came up another 8"-10" by the time we stowed the gear and started hauling the boats back to the Escape.  It was actually very interesting to watch as the river transformed into something totally different from what we had found when we arrived.

After unloading the gear and loading the yaks onto the car we decided to go back and take another look.  Now the water was about 5 feet above where it had been when we started.  You could see almost no shoals and the flow had at least doubled.  We were glad we called it quits when we did.  Although I know we could have easily maneuvered back to the launch, even in the high, fast water, you can never be too careful.  It is another reason to always wear your PFD, be aware of river levels and release schedules, be attentive for sirens/horns when fishing below dams, and fish with a partner when possible - especially on new water.

The 3 hour trip was just what the doctor ordered - some solid smallie action and one awesome kicker.  During the BASS Slam a few years ago, I caught every species of black bass in the US.  The Suwannee bass, pound for pound, is pretty darn strong, the Shoal bass will seriously bend a rod, and AL Spots are absolute brutes.  But I think the smallmouth might be my favorite fighter of them all.  The mix of drag peeling brute strength, aerial acrobatics, and clever runs are nearly impossible to beat.  I'm more than ready to do it again!  Until next time, tight lines!
Posted by Drew Haerer at 3:45 PM