Sliming the Kayaks in Massachusetts!

My last blog talked about how much I love fishing new bodies of water - the scouting that goes in, the anticiptation, the adventure.  Well, since the beginning of June, I have had no choice - everything is now new.  After endless hours of packing, moving, unpacking, organizing, etc. we are finally settling in to our new home in western Mass.  So far, we couldn't be much happier.  Admist all the chaos, catching up on work, and MM taking her boards, we have managed to sneak out and slime the yaks.  Thankfully, we have a river in our backyard and 4-5 lakes within about 15 minutes.  I guess I am little spoiled.  To say that I was eagerly anticipating the first trip would be a major understatement.

Our first trip was short and sucessful.  We hit a small, shallow lake originally in search of bass.  But when we arrived, we were informed that there are only pickerel, perch, and panfish in the lake.  We didn't let that deter us and launched anyway.  We landed a bunch of pickerel, up to about 18", on swimbaits and topwater plugs.  It was a bunch of fun to see them slash out of nowhere and blast the topwaters.  He wasn't a giant, but the fish pictured below is my first MA pickerel and first MA fish from a yak.  I also caught a 10" pumpkinseed, which put up a heck of a fight and qualified for a MA Sportfish Award Citation. 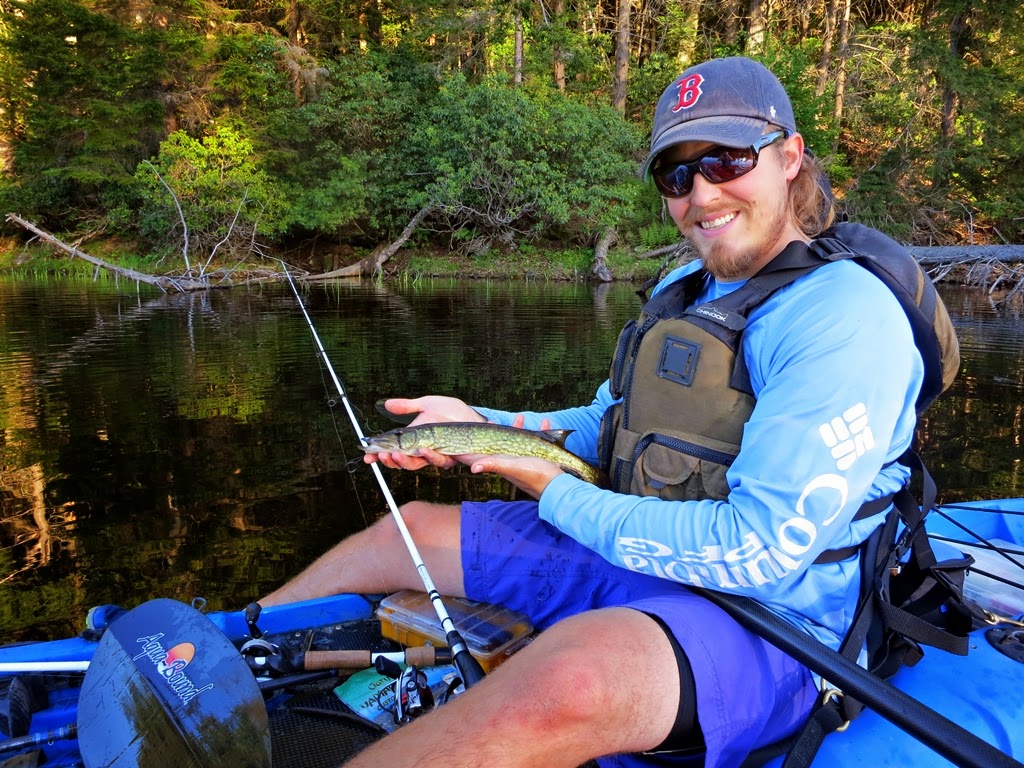 My first MA fish from a kayak and first MA pickerel


Our second trip turned out to be even more sucessful.  Mary May's father, Jerry, had mentioned a lake not far from the house that was nestled in a small forested town way up in the hills.  Thankfully the weather cleared up after work on Tuesday and we snuck out for a couple of hours before dark.  It was Jerry's first trip ever in kayak, although he traveled many a mile via canoe back in the day.  The lake was shallow and had a mix of emerging vegetation.  The water temp was also warmer than I expected.  My first bite came throwing a plastic worm on a weed edge that extruded from a point.  A chunky bass inhaled the worm on the fall and put up a great fight before I could land him.  He represented another first - my first MA largemouth. 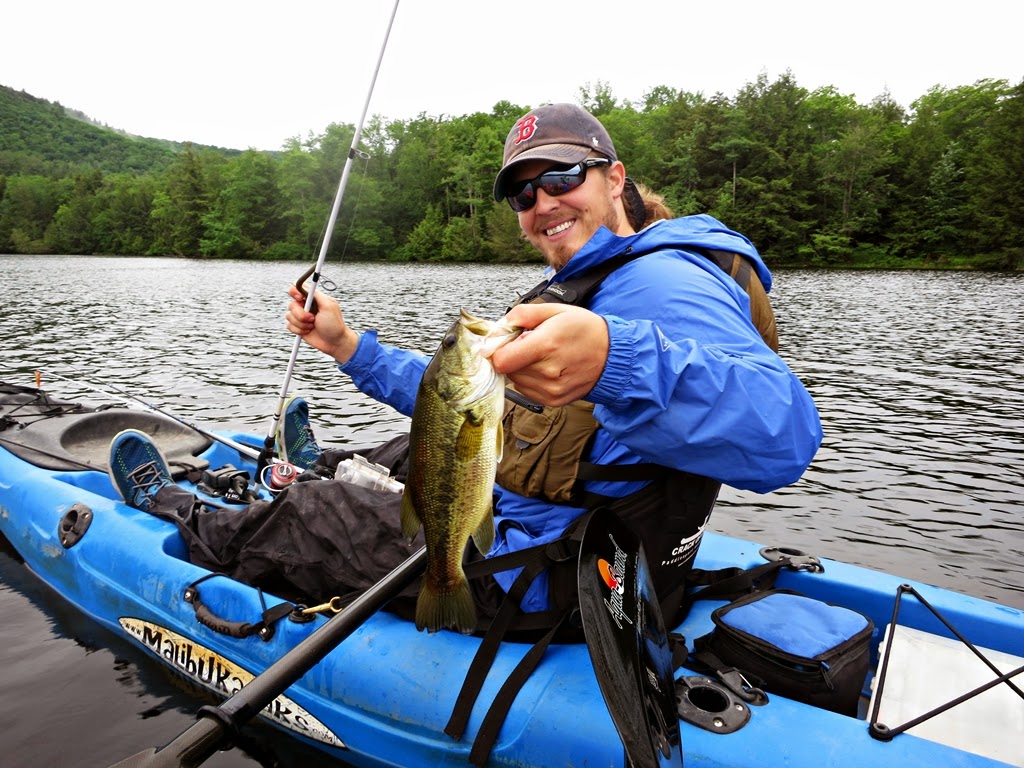 
About 10 minutes later I had a big pickerel blow up a topwater bait as it came over a shallow log.  The fish crushed the bait as it went airborne.  It was one of the more acrobatic pickerel I have ever caught.  The fish was a picture worthy 22-incher, so we snapped a few shots and let him go. 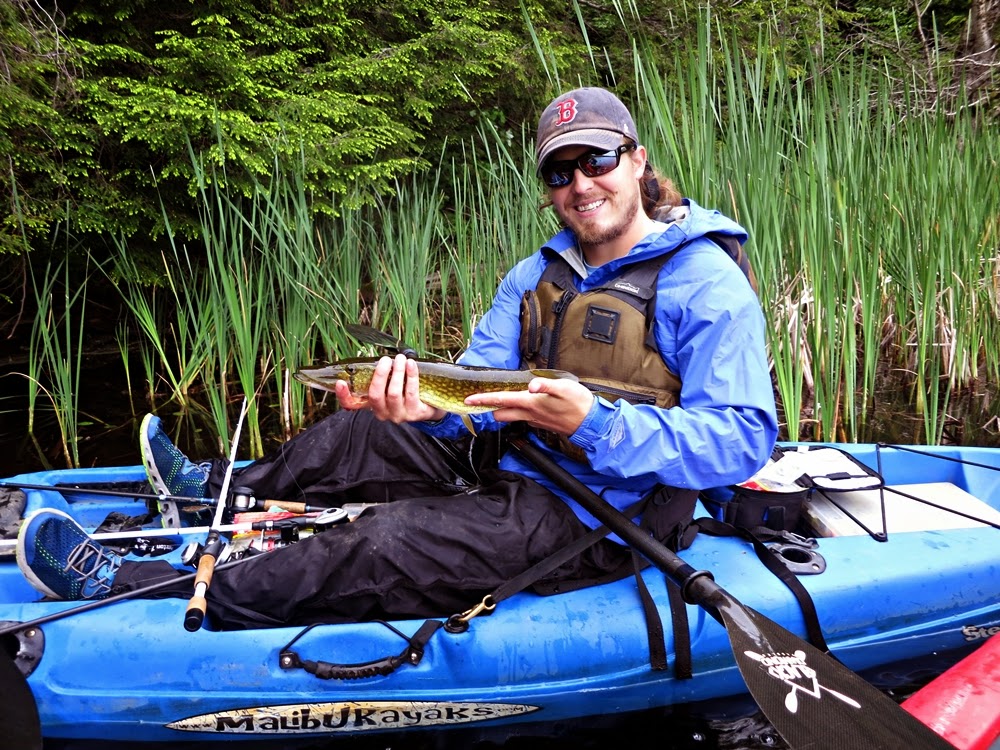 A healthy MA pickerel the crushed a topwater


Then I had one of those light bulb moments.  My southern side wanted to throw a black buzzbait, but deep down, I knew it just wasn't time yet.  So, I listened to my northern side.  I cut off the buzzer and tied on a lipless crankbait.  I threw it toward deeper water and worked it through weed tops via a mix of yo-yoing, changing speeds, and ripping the bait.  BAM!  First cast - fish on!  It was another big pickerel - around 21" and thick across the back and stomach.  In the next 6 casts I caught 4 more pickerel.  So I paddled over and re-tied a lipless crank on Jerry's rod, while letting MM keep working her topwater.  I picked up a couple more small pickerel before hearing Jerry, very nonchalantly say, "this feels like a nice fish."  Considering it was his first fish in 15-20 years, I would have expected more yelling or something...but that's not his style.  He lifted a healthy pickerel from the water, we snapped a few pics, and sent him back to the depths. 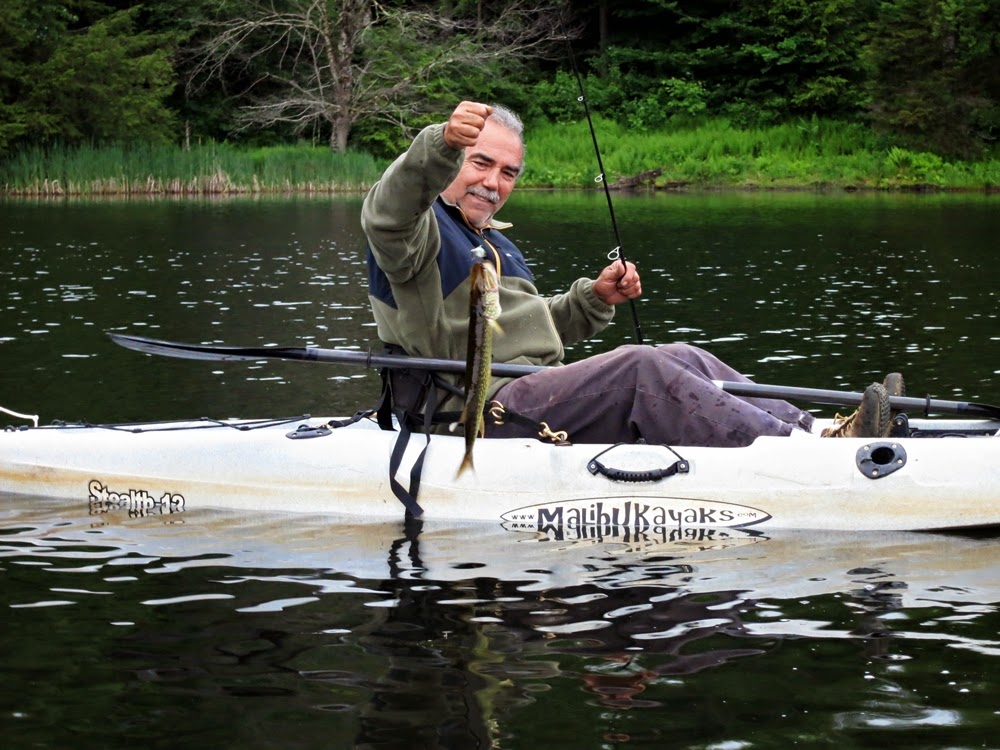 
About this time, Mary May had a monster blow up and the fish, a big pickerel, took the bait with him.  A different pickerel also managed to swim off with one of my lipless crankbaits later in the evening.  I had forgotten my metal leaders, which will not happen again.

We picked off some more pickerel and 1-2 lb largemouth before we heard Jerry's drag start to peel.  This time he was a little more excited and the fish was bulldogging him into deeper water.  The previous bass I had hooked all went airborne, so I figured it was another pickerel.  But sure enough, when he got it to he boat, it was a gorgeous 17+" bass.  The fish had whacked his lipless crank along a deep weed edge.  The picture did the fish, which looked to be a post-spawn bass, no justice. 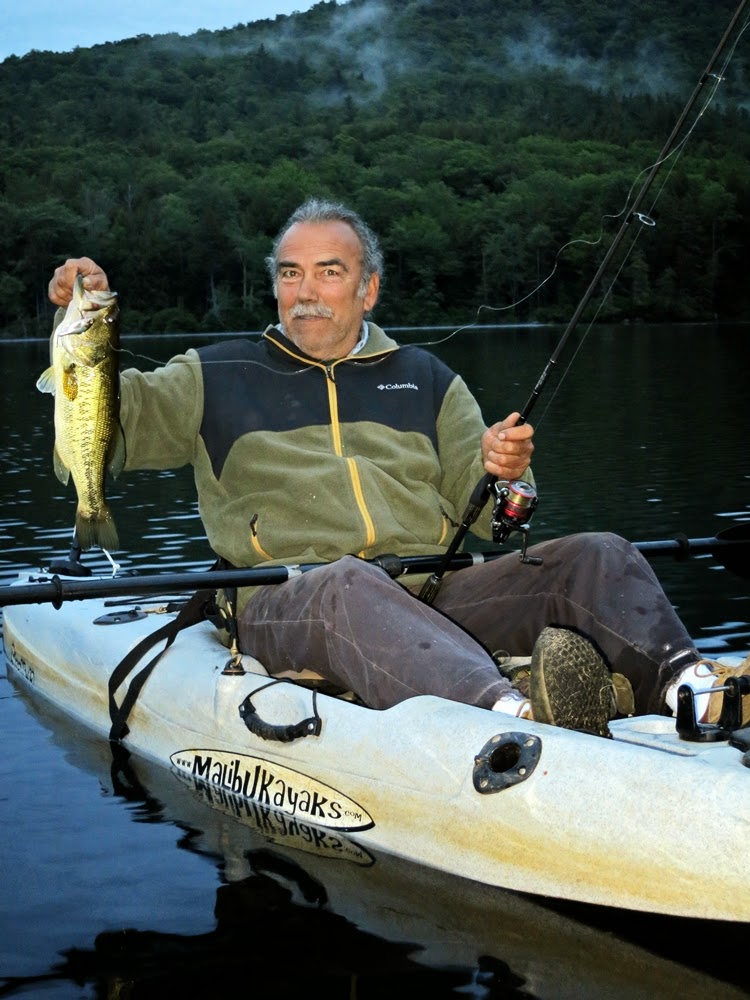 Then I began casting along another deep weed edge and got a good bite of my own.  My Carolina Custom Rods all-purpose set-up was bent in half, as the fished crushed my Spro Aruku Shad as I yo-yoed it into deeper water.  As I scooped the largemouth from the water, I could see that he was easily my biggest of the night.  He was somewhere in the 3-3.5 lb range and awfully fun to fight.  The bass also appeared to be a post-spawner, if I had to guess. 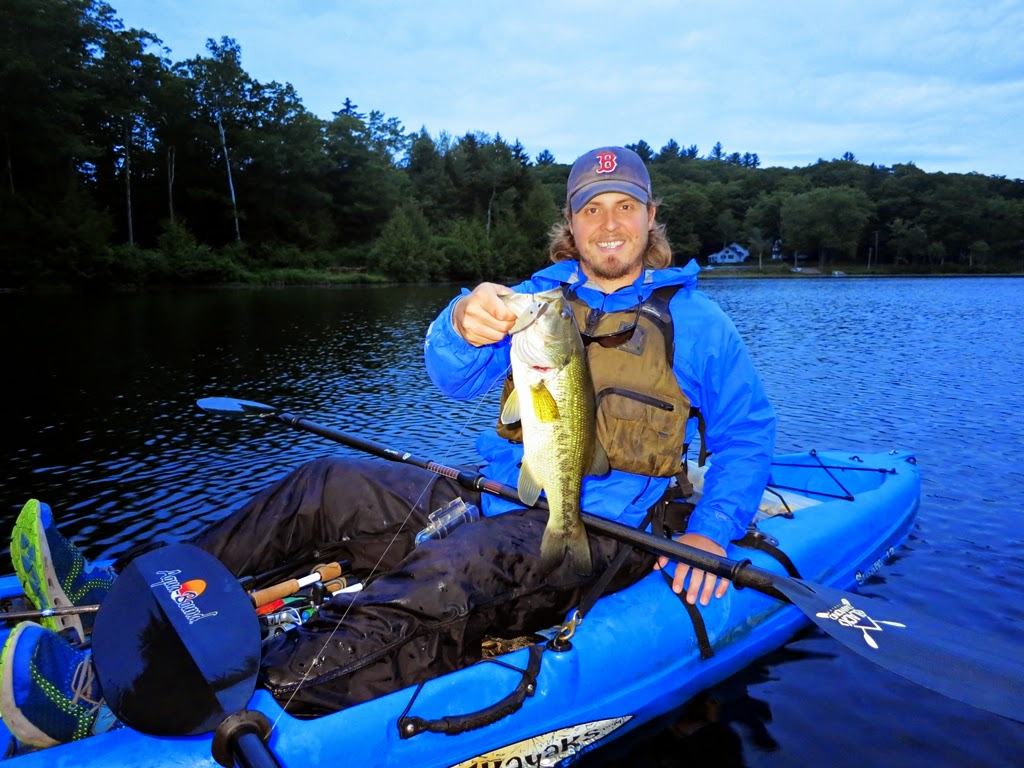 A beautiful bass from the vegetation


After that, we pretty much called it a night.  The temperature was dropping fast and we were worn out.  Hopefully this rainy spell blows away soon and we can revisit the lake with the sun as our guide.  Admittedly, I had forgotten how fun it can be to fish lakes with heavy vegetation.  Given a few more weeks of growth, the evening topwater bite is going to be crazy.

I'm not sure if our next trip will be back to the same lake, a new lake, a river smallie float or something out at the coast.  But I can say that I am loving the area and the exploration with MM, family and friends.  I even paddled a SUP for the first time ever the other night.  Although it was really fun and relaxing, I think I'll stick to the MK Stealth's for fishing purposes.  Until next time, tight lines!
Posted by Drew Haerer at 2:36 PM