I often get asked where I catch the fish I blog about, or with what baits, or what techniques.  And I always share the baits and techniques.  I'm not doing anything special.  But there aren't many people I share my fishing spots with.  I'm a firm believer in learning by scouting and exploring.  Laziness is not a trait befitting of my style of kayak fishing.  As any true river rat would oblige - you have to earn it.  Rarely do I come home from a day on the water without a few bumps, bruises, and scrapes, some missing plastic on my yak, maybe a little poison, and usually a raw thumb.  And the next morning I can count on needing to stretch the soreness from my body before I start my day.  So my answer to where I fish is typically, "off the beaten path, as far as I can get."  I suspect that the KBF Open, which took place in March on Santee Cooper, will be the only time all year that I use an actual boat launch.  So what is my point?  Well, a couple weekends ago, Bill and I hit the water for our last hurrah.  Based on our schedules, we knew it would be our last kayak fishing trip before I moved north.  For a while, we debated which "old favorite" we would hit.  However, as we talked, we both kept getting more excited about a stretch of water I had scouted on satellite imagery over the winter.  It had everything you could ask for, but access looked nearly impossible.  Our curiousity of the unknown was too great - we opted for the new river.  And the nearly impossible access lived up to the hype.  We did a lot of dragging, portaging, and trailblazing.  Multiple times I found myself questioning whether it was worth it.  But getting off the beaten path has rarely let us down.  That day was no different.

We arrived at the river around 7:30 AM.  The spot we wanted to launch from was posted as private property, no trespassing.  Option 2 - more of the same.  Option 3 was about 100 yards of nearly vertical boulders that would have probably put us both in casts.  But Option 4, although it was much further down river, was finally doable.  We loaded up, drug about 100 yards down to the water, and started our upstream paddle.  It didn't take long before I hooked up with a small largemouth on a balsa crank in a bluegill color.  And soon after we came to a gorgeous shoal where we caught about dozen largemouths up to 2.5 lbs on Premier League Lure spinnerbaits.  Then came the jam - a massive mess of an obstacle that would require a portage.  The only possible portage was cringeworthy, to say the least.  It was 100 yards of mixed boulders, brush, and branches - the first half of which was uphill.  Thankfully, we made it through without any major damage, other than some scrapes and, as we would find out the next day, poison oak.  Then we dropped back into the river down a steep, 4-foot clay bank and were on our merry way, mumbling, "what the *bleep* are we thinking" under our breathe.

But only a few casts later, all was forgotten.  A 17" largemouth smoked a BBB Fighting Frog and we were back in business.  The river was littered with wood cover and overhanging bushes and vines.  We flipped and flipped and flipped with mixed results.  There was so much wood, and deep wood at that, that it was hard to pick it all apart properly.  But we were catching some fish, and also knew that a lot of fish were bedding and wouldn't eat unless we put our baits right in their face.  Granted, neither of us care much for catching bedders, and in the stained river, it would have been nearly impossible anyway.  Eventually, I picked up my spinning rod and began skipping a finesse worm way back under overhanging brush.  It didn't long before I saw my line swim sideways, set the hook, and heard the drag peel.  The fish fought like it was a giant, putting up one of the best fights I have had all year.  When I finally got him next to the boat, I was shocked to see that the brute was 'only' 4 lbs.   We snapped a few photos and let her go. 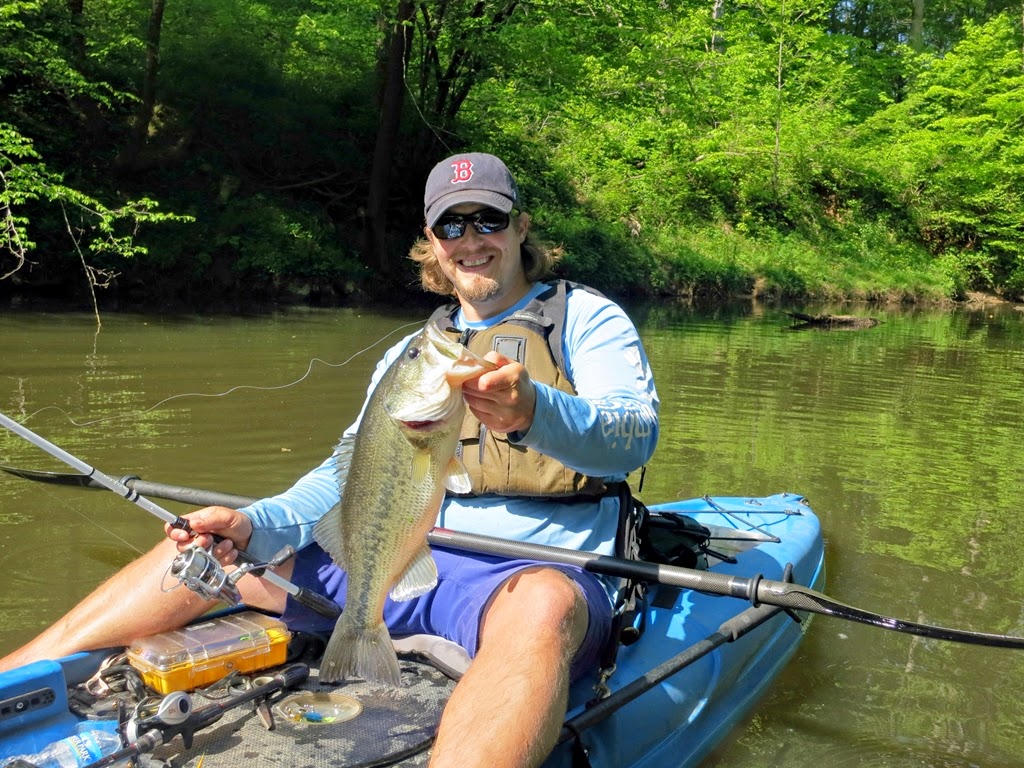 We continued fishing up-river. Our goal was to get to a large shoal I had seen on the map, which had 2 or 3 very large eddies behind it.  We were catching solid fish with regularity - 2 and 3 lbers that all fought like freight trains.  We have tangled with some mean bass, but these might have been the meanest largemouths I have ever fought.  In fact, at one point during a fight, Bill exclaimed, "are there smallies in here?".

Finally we got to the shoal and immediately started hooking up.  I caught a couple on a rocky bank using a squarebill crankbait and Bill caught a few on a tube.  We worked our way around the eddies and rock ledges, picking off fish fairly regularly.  I had a big catfish hooked, momentarily, but never got a good hookset.  After catching about 20 bass at the shoal, we were beginning to think that no bigger fish existed.  Then I got a bite that started pulling my boat around.  Based on the fight, in any other river, it would have been well over 5 lbs.  In this river, it was a 3.5 lber....my heart sank a little.  Then Bill set the hook on a giant - a legit giant - flipping a tube along a deep portion of the shoal.  The fish came to the surface, spit the hook, and returned to the depths.  It was easily a 5.5-6 lb bass.  Another heartbreaker.

At that point, it was time to turn around and head back down river.  We weren't getting a ton of bites on the way back, but the bites we were getting were nearly all 3-4 lb fish.  The baits of the day were the Fighting Frog, Texas-rigged with a 4/0 hook and 3/8 oz weight, and finesse worm, fished weightless and wacky.  We caught a couple gorgeous fish right above the huge jam and then began mentally preparing for the portage.  At this point, we were fairly exhausted and pondering if we could just smash through it.  We couldn't.  But the portage went faster than before and gave us about 30 minutes to fish downstream from the launch.

The river was narrow and shallower in that stretch and the fish were spooky.  We spotted a few fish beginning to set-up on beds and other cruising the bank.  We only caught a couple, but we did see one bass that was around 5 lbs and a few more that were good size.  Maybe next time "we" will fish down-river instead.

The day kind of culminized Bill and I's kayak fishing trips over the years.  We've learned a ton from each other and became much better fishermen because of it.  He started as a bass boat convert, and since, we've fished together in 7+ states, battled flows over 6000 CFS, run class III rapids, completed the B.A.S.S. Slam, won the RiverBassin Team of the Year Title, and caught plenty of big bass in places others completely overlook because we put in the extra effort and go the extra mile.  Everyone defines an adventure differently, but as a kayak angler, the possibilities are endless for you to create your own adventures - and memories that last a lifetime.

We certainly walked away from the trip smiling.  We had taken on a new river and it proved to be one heck of a physical challenge.  We also caught about 60 of the meanest largemouths we had ever hooked.  Our best 5 went around 20 lbs and felt more like 40.  When that river turns on again after the spawn, it is going to be insanely good.  And on top of it all, we had 4 deer swim right in front of us, and saw a bald eagle, turkey, and multiple osprey and herons.  It was yet another great adventure with a great friend!

Until next time, tight lines.
Posted by Drew Haerer at 3:59 PM