So Good, it Hurts - Pre-Spawn Largemouth on the River

My hands are stiff.  My forearms ache.  My shoulders and elbows creak and crack.  Yesterday was one of the most explosive bites I have been on in a long time.  These pre-spawn river largemouths were mean, aggressive, and as bloated as could be.  They weren't always easy to find, but when you found them - it was time to loosen the drag and hold on!

Last week I got a call from my friend Todd aka 'The General'.  He had to cancel a trip to South Carolina due to high water levels and wanted to hit the water somewhere locally on a Monday.  We haven't fished together in over a year, so of course I said yes.  For me, that meant sacrificing part of the weekend to get work done, but I was super excited to get out.

We looked at the river gauges and most of the local flows were pretty high as well, but we found a few that were doable.  We opted for a river that I had only ever fished during low flows and each time it was almost crystal clear.  This time, we arrived to find it high and stained.  As we set up our float trip, my mind was churning as I had no idea how the change in water conditions would affect the fishing, but I was excited to find out.

We started throwing spinnerbaits and crankbaits around eddies and current seams formed by small shoals and boulders.  We both picked off a few small bass, but nothing to brag about.  Then we got into a section where the river slowed a bit and the abundant cover changed to wood.  I couldn't seem to buy a bite on my flipping baits, but Todd had a chunky largemouth nail his spinnerbait as it came over a log.   This guy weighed 2 lbs 9 oz on the scale. 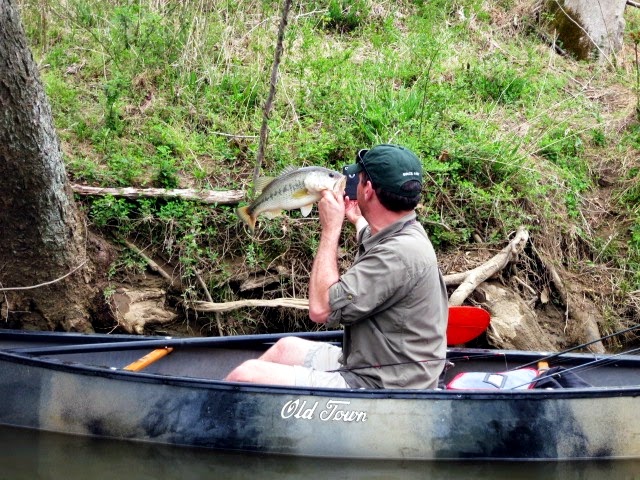 Todd's theory is that fishermen invented the selfie.  He is right - we've been doing it a long time.

But after that fish, the bite remained hit and miss.  Most of the usual patterns were not producing, which I suspect had to do with the high, fast water moreso than the clarity.  I was grinding out some fish on a CP Series 2 crankbait while Todd threw a chartreuse and white spinnerbait.  He was catching more and bigger fish than I was, so I switched to a spinnerbait as well.  After throwing a white Premier Leagure Lures River Series bait for 20 minutes with no luck, I decided to switch to a black, 3/8 oz River Series.  My how things changed.

I am not sure if it was the color in the stained water, the fact that it looked more like a bluegill, or the fact that black is my confidence color for most blade baits, but the bite picked up fast.  Fish were nailing the bait before I could even begin to crank it and my spirits were rising quickly.  Then we got to an area where it just became all out insanity.

First, I had something crush a crankbait after it deflected off a rock.  It was ripping drag and I was praying it was a giant.  Well, it was giant, but unfortunately of the carp persuasion.  It actually ate the crank right in the corner of the mouth.  Two casts later and Todd was onto a big girl.  She put up a fine fight before he landed her.  The brute went 4 lbs 13 oz and we were getting amped. 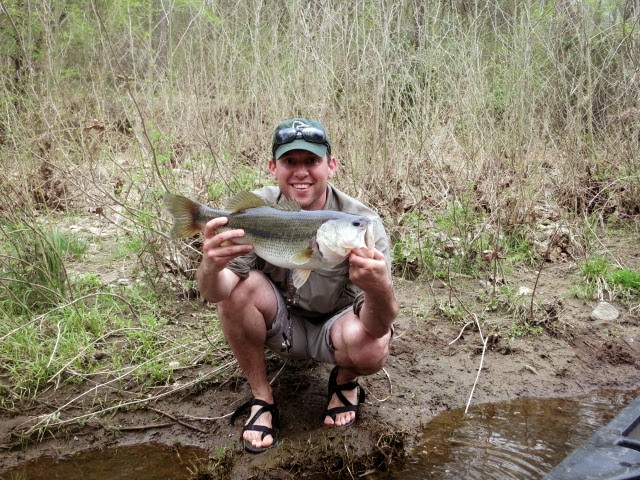 Todd with his chunky 4-13 river monster


A few minutes later I caught fish on 4 consecutive casts tossing my PLL to an isolated boulder.  Then we moved up the bank slightly and managed to double (both of us caught a fish at the same time) on 3 consecutive casts to different logs.  It was beginning to get silly.  We proceeded to put a few fish in the yaks (well, Todd actually paddles an Old Town Guide 119 canoe, but you get the picture) over 3 lbs and plenty more over 2 lbs.  Then we came to the holy grail spot - a massive eddy.  I can't even explain how good it was.

I launched a cast with the black PLL and before I could even turn the handle - a 4+ lb fish was airborne with the bait in his mouth.  Seconds later, the bait popped free.  On the next cast I felt my bait bounce of a rock and WHAM the rod was doubled up.  The fish was a solid 3 lber, but he came unbuttoned about 10 feet in front of me.  On the next cast I landed a fish around 2.5 lbs.  On the next cast the bait got to about 5 feet in front of me and I popped it over a rock. All of a sudden I see a huge flash and a massive bass inhales the bait.  The line broke.  I was crushed.  Not just because I lost the fish, but because that was the only black spinnerbait I had with me.  I threw a brief adult temper tantrum and tried to re-focus.  I decided to tie on a bluegill color spinnerbait, which was a mix of dark green, blue, orange, and yellow.  Although it produced 7 or 8 fish, most were in the 1.5-2.5 lb range and my gut told me it just wasn't quite right.

I knew I had to go back to something black, so I grabbed a black chatterbait, custom made by some friends of mine, and threw a Zoom Speed Craw on as a trailer.  Game changer.  They wouldn't touch the bait if I simply cast it out and reeled it in.  But if I ripped it, dropped it, and yo-yoed it they would absolutely crush it.  I mean rip the rod out of your hands crush it.  The only thing I can say for sure is - those bass HATE bluegill.  I would let the bait fall to bottom then start to pick it back up and my rod would load up time and time again.  I have no idea how many I caught in that general area, but it was a pile and I counted 17 that were between 3 lbs and 4 lbs.  The highlight was this pig that I saw come up and slam my chatterbait about 10 feet in front of me.  She ripped drag , which by this point was set quite a bit lower, from my reel and did not want to give up.  But finally, I wrangled her long enough for a photo op and weight - 5 lbs 3 oz. 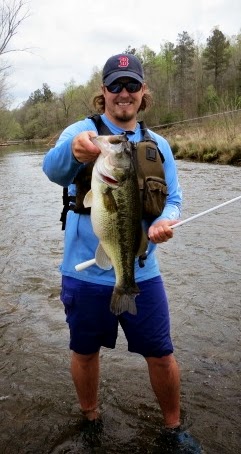 
The funniest moment of the day actually occurred during the feeding frenzy.  I had pulled my bait onto a shoal and was wade fishing.  I hadn't been paying much attention to it, figuring it was fine where it was.  Then, I launched a long cast and something caught my attention from the corner of my eye.  My kayak had somehow come loose and was floating down river.  I began running after it - about 20 yards across the rocky river bed.  As I was sprinting, with rod in hand, I felt a thump and about a 2 lb bass ate my bait.  So there I was running like an idiot down the river chasing my kayak and pulling a largemouth along for the ride as it fought and jumped in an effort to get free.  Thankfully, I caught the boat before it got to the rapids below us and miraculously, the fish stayed hooked the whole time - although I am sure he was grumpy about the ordeal.

Eventually the blade bait bite slowed and I picked off a few on plastics.  Todd, who was catching fish also, managed a few on a black buzzbait (he and I are both buzzbait addicts).  We floated a while longer and picked up 7 or 8 more fish, but nothing to brag about.  By the time we got to the end of the float, my adrenaline had worn off and I was feeling the effects of setting the hook, fighting, and landing all of those fish.  I guess it is a good problem to have, but wow did my body feel it...and still does.


My take aways from the float were - 1)  never underestimate spring time river eddies, 2) don't be shy about varying your retrieve with blade baits, 3)  make sure you have the right rod for the job.  I can say with 100% certainty that if I had been using the wrong action rod, I would have lost a lot more fish.  When fish are crushing your bait like that, they don't always inhale it.  It is totally a reaction bite and so a lot of times they barely get the hook.  A cranking rod or composite rod with a big, parabolic action is really important, because it allows those fish to load up on the bait and load the rod so that the hook almost sets itself.  If you are using a stiff rod and have to work to set the hook, you are going miss a lot of fish as you rip the bait right out of the fishes mouth.  I rotated between my two favorite rods for cranking and blade baits - both 7'6" composite style rods from Carolina Custom Rods.  I pair one with an Abu Garcia Revo STX and the other with the Revo Premier - both with 6.4:1 ratios.

Although my execution was sloppy at times, I am not sure the day could have been much better.  We didn't really expect any giants on this float, so it was a welcome surprise to see a few eastern Piedmont pigs show up.  Hopefully this river bite stays hot...because we all know I don't want to fish a lake any time soon.  Until next time, tight lines!
Posted by Drew Haerer at 1:09 PM