We had high expectations.  Very high.  It is prime pre-spawn fishing here in central NC and the river we had in our sights is known for pumping out big fish.  But it was a five and half mile stretch that none of us had ever fished before and even at half of the usual April flow rate, it was still moving pretty fast.  Torn between it and another flow where we knew we would catch a pile of fish, we opted to go for broke.  Although the giant never quite materialized, eleven 4 lbers is nothing to bulk at.

This float was some of the usual suspects - myself, Bill, and our buddy Derek.  Derek brough a trailer and in no time we had a shuttle set-up with our vehicles so that we cars at each end of the float.  The put-in was easy and the area around it looked good.  Sure enough, within a few casts Bill was hooked up on a good fish.  It inhaled a fluke right behind a shoal in an eddy pool and started pulling drag.  After a solid fight he landed what would be our biggest bass of the day - a 5.5 brute with a serious gut. 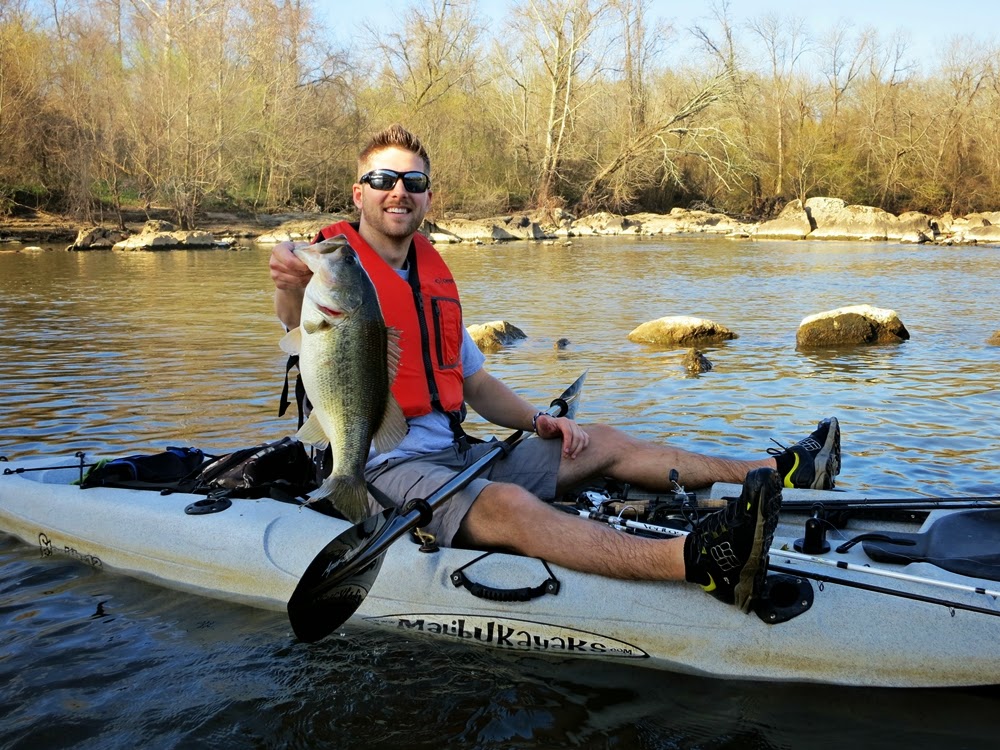 Bill got the day started right with this pig largemouth
Then we paddled up river and fished through a number of shoals and pools that looked awesome, but we couldn't buy a bite.  I'm guessing it was because of the green scum algae, which was starting to build up there and is probably going to explode by June.  But then we came to a very obvious spot with a main chute and eddies on each side.  We set-up to fish it, which meant carrying the boats about 60 yards over large, loose, ankle breaking rock.  While Bill and I portaged the boats, wishing we had packed lighter, Derek started fishing.  All of a sudden he started yelling and we realized he was yelling that he had a giant.  By the time we got to him the fish was gone.  It ate a small jig and he didn't get a good hookset, but he estimated it to be at least 7-8 lbs.  It was pretty crushing, but also a serious adrenaline rush.  Shortly after, he landed a solid bass and Bill cranked up a couple 2-3 lb bass.  I managed a 5-6 lb bowfin and Bill lost a giant bowfin - easily surpassing 10 lbs.  The day was shaping up nicely - now if only we could convert those bowfin to bass!

We fished through some shoals and around wood cover on the bank without any luck.  Then I pulled up into a creek mouth that had clear water flowing out of it.  I pitched my Fighting Frog to a few laydowns with nothing to show for it.  I almost turned around, but then I looked over and saw two decent sized bass swim by me.  Despite the gusting wind, I stood up and quickly spotted another bass coming my way.  I pitched my bait in front of him, gave it a quick twitch, and immediately saw his gills flare as he sucked it in.  Fish on!  It was a solid 3 lber and it was the fish that changed my day.  I realized the creek was loaded with fish and paddled out to yell for Derek and Bill.  But they couldn't hear me and the current and wind would make it nearly impossible for them to get back up-river to where I was anyway.  So I went back on the hunt and after I caught a few in the 2-3 lb range I started focusing solely on bigger fish. 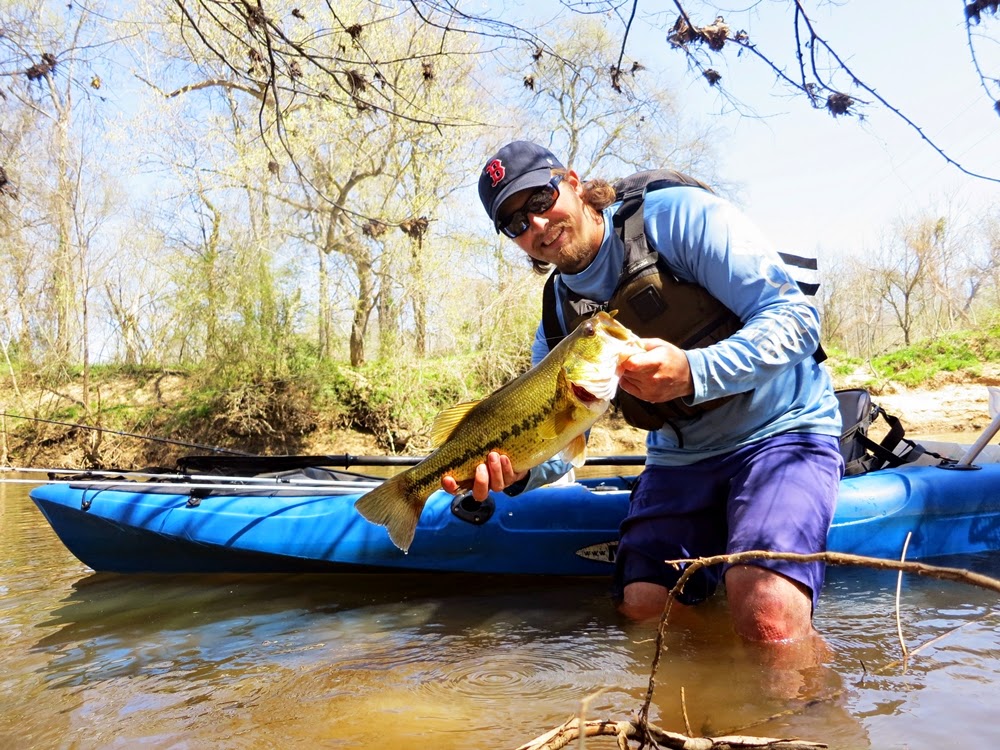 A solid 19-incher to start the day


My first move was to tie on a finesse worm, which is my go to bait in sight fishing situations rigged weightless on a 2/0 EWG worm hook and thrown on my Carolina Custom Rods - Finesse Special.  Oddly enough, they were finicky about color choice.  I tried junebug, green pumpkin, and brown pumpkin before I found what they really wanted - watermelon with large red flakes.  I stood in my Stealth and pitched to anything 3 lbs and over.  I also cast toward bank cover - in particular, to areas where pollen, leaves, and debris were stacked up near wood cover.  Bass love to sit under those types of spots.  It didn't take long before I felt a solid thump and my drag started peeling.  Eventually, I lifted my first four pounder of the day from the water. 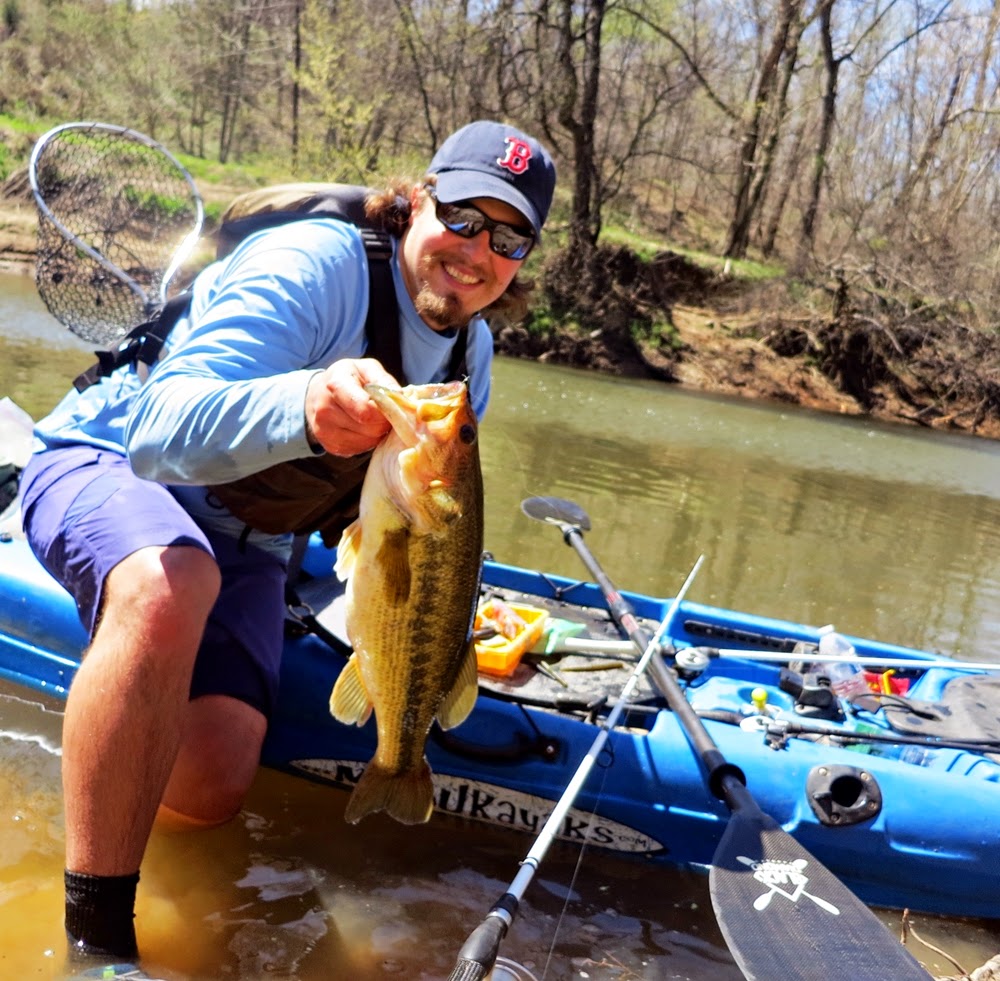 This beefy 20-incher was my best bass of the day


Then I repeated the process again and again and again and again.  I wasn't seeing any giants, but the number of fish in the 2-4 lbs range was unreal.  After over an hour and a half in the creek, I knew I had to leave to catch up with Bill and Derek.  It was a tough decision, but the right decision.  I landed between 20 and 25 bass, with six going 4 lbs or over.  I would have been happy to quit then. 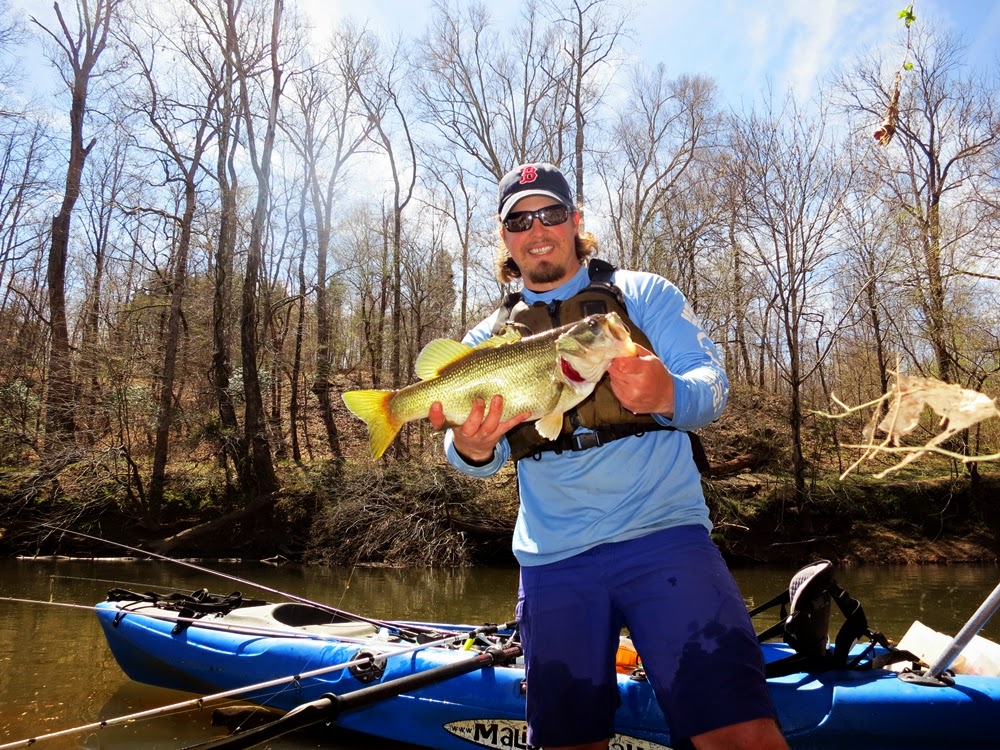 
The boys hadn't has as much luck and I felt slightly bad.  Usually the fish in this particular river are abundant and aggressive, but they were stingy for us most of the day.  We caught a few fish here and there, but nothing consistent.  Finally Bill flipped a tube into a tree and, as he put it, "hit the bass on the head with it."  But the bass was a chunky 4 lber and a gorgeous fish that got us re-energized.

We went through another slow stretch before finally getting into an area where the river slowed and we could thoroughly work bank cover with flipping baits.  It was a perfect situation with a deep, steep clay bank and lots of wood.  Sure enough, the fish were staging on it.  I flipped to a stick-up and immediately felt a bite.  I set the hook and it was a good one.  At a chunky 18.75", it was another 4 lber.  It turned out that what looked like a couple sticks above the water (even while standing) was a mess of brush below.  Never take bank cover for granted. 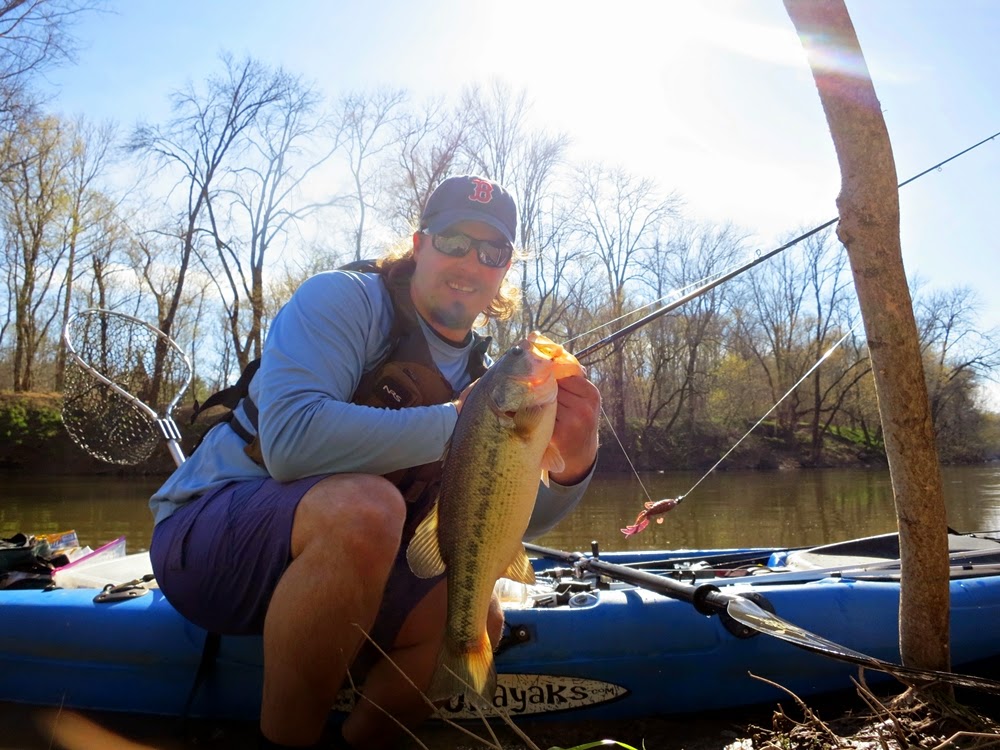 
For the rest of the float, the bite was consistent. We were all catching fish on a variety of flipping baits as well as buzzbaits. Bill landed two more solid fish that were over 19", which ran our 4 lber count to 11 for the day. I lost what looked to be a 5+ lber in a laydown that would have really been icing on the cake for me.  Derek was having solid fish blow-up on his Premier League Lures double buzz with about half actually getting the hook.

Although it was a hot and cold day, we ended with about 55 bass.  We were a little disappointed that we didn't land a giant and also that we had some long stretches without bites.  We take a lot of pride in figuring out finicky bass and it was frustrating to feel stumped at times.  But then we had to step back and put it in perspective.  55 bass, 2 big bowfin, and nearly a dozen 4 lbers - it is hard to not be stoked about a day like that.

The rivers of central NC are high and muddy again and probably at least two days away from truly being fishable.  But when they are you know I will be right back out there chasing brutes off the beaten path.  Until next time, tight lines!