A Challenging Fall Day Salvaged by Persistence...and the Fairy Wand

As I have mentioned on a few of my previous posts, fall fishing can be a grind.  Sunday was the ultimate grind.  Three of us arrived at the river with high hopes, but we soon came to realize, it was going to be really tough.  We were met with a combo of morning air temperatures hovering just above freezing, post frontal pressures, blue bird skies, extra clear water, and high, constant winds.  When conditions get like that I try to keep it simple and stick with tactics with which I am the most confident.  Being a native Pennsylvanian, this typically means rigging a spinning rod - or as some folks call it, a "Fairy Wand" - with a finesse plastic of some sort.  I find that most of the guys who use the "Fairy Wand" term are the same ones who struggle to get bites when the fishing is tough.  Other stereotypes include having seven teeth, tossing empty Busch Lite cans overboard, rooting for NC State, and spending thousands of dollars annually on hardware for throwing Carolina Rigs.  On Sunday, I broke out the Fairy Wand, and because of that I turned a rough day into a memorable one. 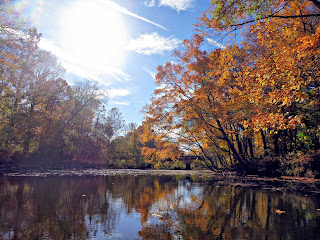 A fall shot I took on a recent guide trip


I met Brett (Mookie) and Joe (BowfinHunter) at a nearby river to chase some largemouths around 9:15 AM.  It was a stretch that historically has been good during the fall.  In fact, a few years ago a friend and I even had a 40 bass day capped with a couple 4 lbers on the week of Thanksgiving.  So needless to say, I was excited to see what was chewing.  We got our yaks rigged and headed for the water.  Brett was kind enough to let me borrow his Sea to Summit Sit-On-Top kayak cart, which made the portage to the river much easier than normal.  Dear Santa....

We decided to paddle up-river and then float back to the launch.  After about 30 minutes of paddling and shooting the bull, we were ready to start fishing.  Brett caught a small largemouth within the first few casts of the day and I thought for sure the bite was going to be hot.  I was wrong.  I was throwing a chatterbait, buzzbait, and Texas-rigged flipping bait with no luck.  Brett managed another on his spinnerbait and Joe one on a jig before I even had a bite.  I flipped my Big Bite Baits Fighting Frog into a laydown and began to jig it back to the boat.  As I began to reel it in for another cast, I felt weight on the line and set the hook.  The bait came flying out of the mouth of about a 12" bass that I could see in the clear water.  He had hit it while the bait was swimming back to the boat.  Not long after, the same thing happened again.  The fish were eating it more like a swimbait than a flipping bait.  So I tried to mix up my retrieve with more swimming and hopping, but that wasn't working either.  The bait which has been red hot for weeks, was suddenly ice cold.

It was about this time that the wind started blowing.  Usually, the wind on this river tends to alternate between a few minutes of blowing and a few minutes of calm.  That is not always fun, but it is certainly doable.  On Sunday, it was a constant 7-8 MPH blow with gusts of 10-15 MPH - even approaching 20 MPH on a few occassions.  Trying to fish plastics around trees was nearly impossible.  On top of that, the buzzbait bite was totally shut down, nothing was touching chatterbaits or crankbaits, and the Fighting Frog remained ice cold.  So I picked up my 7' Carolina Custom Rods spinning rod that I use mainly for Texas-rigged worms and shakeyheads.  I rigged a 1/8 oz bullet weight above a 4/0 EWG worm hook and threaded a 6.5" Yamamoto Kut Tail worm in green pumpkin-red flake onto the hook.  The line, which I use on all my finesse gear, was 8-lb P-Line 100% fluorocarbon.  The Kut Tail worm is one of my favorites in the fall.  It has more action than a straight tail worm, but is much more subtle than a ribbontail.  I didn't put it down the rest of the day.

Granted, the bite was still tough, but I managed a 12-incher fairly quickly then flipped my worm to the base of a big tree and WHAM.  The fish took off and was pulling drag.  I thought for sure it was going to be a 3-4 lber, but the bass measured only 15.5" - although it did have quite the gut.  I worked for the next hour with only 4 bites.  Two were very subtle and I didn't get a good hook set in the wind, so they spit the hook.  The third was another 12" fish.  But the 4th had me smiling.  I pulled up to a big log jam and grabbed hold of part of it with one arm.  I then flipped the worm between two logs and as it fell, I felt that thump I had been waiting for.  I set the hook and saw a nice fish dart sideways from under the log.  I pushed off of the branch I had been holding and began to try to paddle backward to get the fish into open water.  Somehow, that plan actually worked and I scooped the fish up in the net.  He measured 19.25" on the Hawg Trough and was probably a little over 4 lbs. 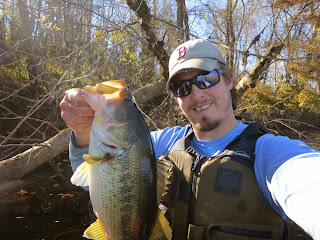 Then came the deflating part of my day.  I went probably an hour or more without even a nibble.  And to add to that, my fishing partners were way down river from me.  I contemplated giving up and just paddling down to meet them, but I kept grinding.  Finally, I caught up with Joe who had been exploring a small, feeder creek.  Brett had decided to call it a day because he had other obligations at home.  Joe and I decided to fish down a stretch near the launch that I had never fished before.  I tossed my worm toward a downed tree and immediately felt a bite, which turned out to be a 14-incher.  At the next laydown, another bite, then another, then another.  On 5 trees in a row I hooked-up - with fish ranging from 14"-18.25" and one that broke my line on a log.  Things were finally looking up and even the wind was laying down a bit.  So we paddled to the far bank to give it a try.  I caught a 12" bass almost immediately.  A few casts later, I set the hook into what at first felt like a mess of sticks.  Then I saw the flash and realized that it was a fish - wrapped in a mess of sticks.  Thankfully, the fish worked himself free of the debris and made a few drag peeling runs alongside the boat.  Finally, I netted him and was all smiles again.  The fish went 20.5" and had a monster gut.  He was between 5.5 and 6 lbs.  We snapped a few photos and let him go. 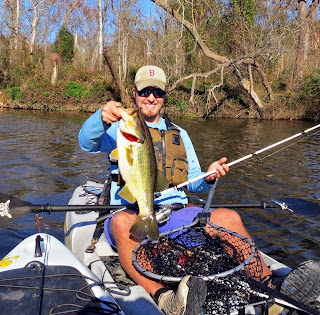 
At this point, I contemplated paddling back up river and doing it all again in hopes that the bite was picking up, but I was tired, wind burnt, and knew there was a gorgeous girl and two furry dogs waiting for me on the couch at home.  We fished for about another half hour before calling it a day.  I caught one more during that last part of the day - coincidentally casting to a spot under some brush where Joe had cast a minute prior - gotta love that Kut Tail.

We portaged back up to our SUVs, loaded up, and hit the road.  It certainly wasn't my best day ever, but it turned out to be a solid day.  It was all about doing what I was confident in and staying optimistic, which resulted in yet another big, last minute fish this fall.  A big thanks to Joe and Brett - it was great seeing you both and getting to fish with you.  I wish the fish, and conditions, would have cooperated a bit more, but I definitely had fun.