Why do you guide?  That is a question I get from a lot of my fishing buddies and folks within the kayak fishing industry.  The answer is somewhat lenghty because there are numerous reasons.  One is that I love to teach.  Another is that I love the challenge.  And I really like introducing folks to the sport and sharing my passion.  This year nearly every trip I have had has been folks with little to no kayak fishing experience - kids, teachers, doctors, military personnel, and others.  We have had some great days along the way, particularly pseudo-guide trips the past two weekends.  Not only did they encompass the type of trip that I love, but they ended in a straight up baptism by bass.

Trip number one took place two Sundays ago on the Deep River with some folks who proudly serve our country.  They were really excited and I wanted them to walk away smiling from ear to ear.  The Deep is an insanely long river and one that Bill and I had a very good day on earlier this summer.  We decided to try a spot we suspected would fish well...and it did. 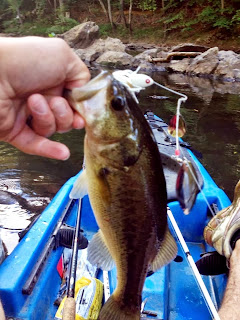 
The day started throwing buzzbaits and poppers around wood cover.  Black buzzers seemed to be the preferred bait and were getting hit regularly.  The fish weren't huge, but we were having fun watching them blow up on our baits.  Unfortunately, the topwater bite shut-off fairly early, but fish were still gorging on cranks and texas-rigged plastics.  We also managed to nab a few on spinnerbaits, swimbaits, jigs, and other offerings.  Our red, white, and blue kayaks were looking Patriotic as we meandered down the river - casting to every piece of cover we could see. 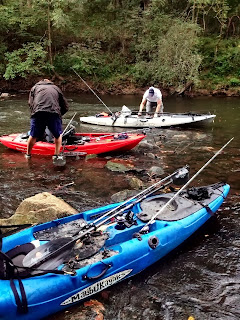 
By mid-afternoon we were hammering the fish and broke the 100 bass plateau.  The average size for the day was right around 2.5 lbs, with a pile of fish over 3 lbs.  Our biggest two or three topped out right around 4 lbs, but that big river bass escaped us. 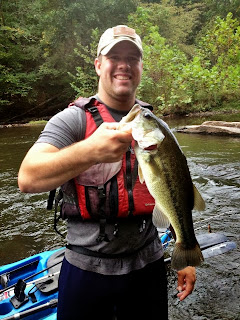 Chris with his biggest of the day


We ended the day with 146 bass - an absurd number by any measure, but we had to work for them.  Chris said it was the most fun day of fishing he had ever had, and that made me extremely happy.  The most productive bait for the day was a 4" Big Bite Baits Fighting Frog, Texas-rigged on a 4/0 EWG hook and with a 1/4 oz tungsten weight, unpegged.  Many fish were hitting it on the fall, while others when it was popped or swam.  The bait has become my go-to flipping bait this summer and early fall and they may be worth a look in bodies of water with lots of sunfish.  It has outfished my previous favorite, the Deep Creek Lures Super Razor Beetle as well as the Missile Baits D-Bomb, the Berkeley Pit Boss and Devils Spear, and Zoom Speed Craw, among others.  All are fine baits, but for some reason the Fighting Frog has really shined.

Bill and I doubled up


Trip number two took place with a friend of Bill's who is still learning about freshwater fishing and had never kayak fished before.  He also hadn't done a lot of river fishing.  But he was the perfect learner - asking great questions and soaking up info like a sponge.  He was so tired of hearing our stories of chasing river beasts that he couldn't take it any longer and bought a new fishing kayak, the Moken Feel Free, last week.  We wanted to break it in right, so we again decided to hit the Deep.

We were on the water before it was light out in hopes of coaxing a giant from the depths.  After doing some dragging and portaging, we began fishing.  Unfortunately the bite started extremely slow.  Fish were hit and miss and finally I got onto a little pattern with a black buzzbait.  I had a big fish blast it, but miss the hook and followed that with two solid 3 lb fish.  After missing another, I put a trailer hook on the bait - something I should have done in the first place.  A short time later I made a long cast parallel to a bank with some submerged wood along it.  About midway back to the boat, the water errupted.  A big fish came flying skyward then torpedoed for deep water.  I leaned into him with my 7'6" Carolina Custom Rod and eventually landed the brute, which boasted a hefty gut and weighed in right at 5 lbs. 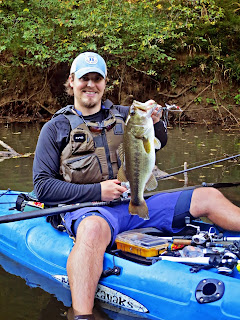 
The bite remained a typical fall, junk fishing bite until about 11 AM.  Then, as if someone had flipped a switch, the bite exploded.  Swimbaits, swimjigs, and flipping baits were getting demolished. Fish from 12"-17" were the norm as we worked each piece of wood or rock ledge thoroughly.  Then we came to a "holy grail" type of area.  It was non-stop action for all three of us on just about any bait we threw at them.  Of course, the big fish were a little more picky, but we caught some chunky fish up to 4 lbs. 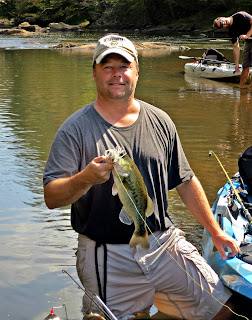 Derek with a fat river bass caught on a swim jig

At one point, I decided to head over toward a little side channel.  On my first cast with the Fighting Frog, I lost a fish.  On my second cast, I felt a solid bite and set the hook hard.  The 2.5 lber was fighting like a fish twice his size and when he turned I noticed another, bigger fish with him.  I grabbed my spinning rod and flipped my plastic worm out in their direction.  Before I could close the bail, line was screaming off the reel.  Thankfully, the two fish diverged and I fought one in each arm as they ripped around the river.  After a fierce fight, I subdued them both and hopped out for a quick photo. 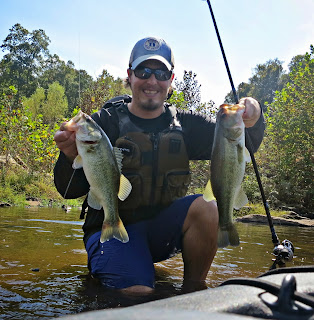 Double the pleasure - double the fun!


By the end of the day, we were worn out, as we had to do a lot of paddling, dragging, rock hopping, and portaging.  But it was totally worth it.  Derek was visibly exhausted, but all smiles after his best day of bass fishing ever.  We ended with 168 largemouths - not too shabby.  In three trips to the Deep this year, we have landed a total of 466 bass - yikes!

The next day I got an email from Derek detailing a conversation he had with a fishing buddy of his about our day.  The buddy was impressed with how many fish we caught, but repeatedly said, "that sure does sound like a lot of work."  I thought about it for a while and realized, that is exactly what I want to convey.  Most of the spots I love to fish are off the beaten path.  None of them have boat ramps.  They all require dragging, portaging, bush whacking, and wading.  They are the type of spots that most people simply don't want to go.  That is why I love them.  They still have a wild aspect to them.  It makes each trip into an adventure and that is how memories are made.  Catching fish is just icing on the cake.

So I encourage you to pull up a map, get off the beaten path, and put in that extra effort.  You may be rewarded with the best day of fishing you have ever had!  Tight lines!
Posted by Drew Haerer at 3:35 PM