Grandaddy's Gun - My Story...Share Yours

Last week I was on my way to Duke for a Monday morning meeting and was flipping through radio stations as I drove.  I got to a local country station and heard the tail end of a song from Aaron Lewis talking about a gun his grandfather had given him.  Although I only caught the chorus, it was a song that hit home.  The first thing I did when I got home from work that evening was to look it up on YouTube.  I played it once, then twice, then three times.  As I wiped the (manliest ever) tears from my eyes, I knew I had found a song that had become an instant favorite of mine.  It was eerily similar to so many experiences and memories that I shared with my grandpa - who is responsible for me becoming a hunter and outdoorsman.  Below is the acoustic version of the song by Aaron Lewis (originally written by the Bone Collectors and Rhett Atkins).  I am going to grab a few lines from it and comment on them as we go.


"That old man gave it to me on the day I turned thirteen,
With a half shot box of shells and a kit to keep it clean."
That is exactly when my grandfather passed along his shotgun to me.  He gave me a choice of three, actually.  I selected an old, JC Higgins, 16-gauge, double barrel.  He filled the pockets of my hunting jacket (another pass me down) with shells and we hit the woods.  That night, he showed me how to oil and clean it...right after he showed me how to clean a rabbit and a grouse.


"It sets above the mantle on a couple rusty nails"
Some day, one of the guns he passed to me will go above the mantle when I build a home.  The gun is not one I feel a ton of nostalgia about since we never hunted with it.  It is a very old 12-gauge, double barrel shotgun that I suspect was passed to him by his father or grandfather.  It is one of the coolest guns I have ever held with dual hammers and triggers.  For now, it is locked away.


"It ain't worth a lot of money,
And it damn sure ain't for sale."
It turns out that Aaron Lewis changed these lyrics from "And it's worth a lot of money".  The 16-gauge so near and dear to my heart isn't worth much for an old gun, but I would sell almost everything I own before I parted ways with it.


"The good lord only knows all the stories it could tell"
My grandpa was a fairly quiet man, but he did tell some stories.  One of which I got a kick out of and I hope I remember all of the details correctly.  He and my grandma moved to be closer to us when we were kids, but when I was teen, we went and hunted the area where he hunted when he was a kid in Coatesville, PA.  We walked down a trail and sat along a field, hoping to have some deer cross our paths.  At lunch he told the following story.  Back when he was growing up, he had a cousin (I think it was a cousin) who would catch, trap, or hunt just about anything to eat or sell.  Right about where I was sitting - on the edge of a thicket overlooking the field - was one of his cousins favorite places to catch skunks.  My grandpa has claimed to have eaten just about everything - turtle soup, rattlesnake, and skunk - among other things.  And if I remember right his comment was, "I didn't care much for skunk".  Anyway, his cousin would sit out rotten watermelon and cabbage and wait for the skunks to come out and eat it just before dark.  He would sneak up on them and grab them by the tail.  Skunks can't spray unless they can push down with the pads of their back feet, so if he snuck up on them from behind and grabbed them by the tail before they saw him, he could hold them in the air without being sprayed.  Well, one day his cousin caught a skunk early in the evening and decided he would wait to see if another would come to the bait.  Sure enough, a little while later two more skunks came to the bait.  He crept in and grabbed one skunk, which was about 10 feet in front of the other.  Then he got greedy.  He now had a skunk in each hand, but what is better than 2 skunks....3 skunks.  So he switched both skunks to the same hand and crept toward the remaining skunk.  As he did the two skunks in his hand managed to twist and touch their feet against each other.  In fact, they were both able to push off of each others back feet, simultaneously, resulting in a double dose of skunk spray at close range.  The cousin, in a fit of gagging and coughing, dropped the skunks.  In the process, he alerted the third skunk, who also unleashed a stream of spray in his direction.  He went home skunkless and wreaking of skunk spray - an odor that took weeks to get rid of.  Whether the story is true or not, I don't know, but it made me smile then and now.


"And it shot a many a shells over the back of an old bird dog"
My grandfather grew up hunting with beagles.  I vaugely remember them when I was very young.  In particular, I remember their kennels and the not so pleasant smell.  I guess he sold them before he moved close to us.  When I turned 14 or so, he bought a beagle to train as a hunting dog for he and I to use - particularly for rabbits.  She never panned out as a hunter and eventually when his health started to decline he gave her away.  Someday, I hope to have a bird dog of my own and you better believe my grandpa's gun will be with me for many a trip. 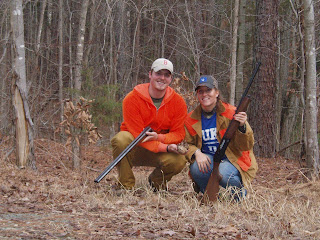 It may be old, but it still shoots straight

"There's a long beard hanging on the livin' room wall,
That I got with a box call...
and Grandaddy's gun."
My granpda was not a turkey hunter.  He didn't grow up doing it and didn't seem to care much for it - I'm not really sure why.  We did go once when I was a teen, but we didn't hear or see anything.  Over the past two years I have been learning to turkey hunt via time in the woods and friends willing to pass along their knowledge.  We've had some close calls, but hopefully next year my grandpa's gun can add another species to the long list of firsts.


"It wouldn't mean what mean's to me to no one....
Cause I can still hear his voice when I put it to my shoulder,
A guns like a woman son it's all how you hold her.
He taught me a whole lot more than how to hunt,
And one of these days I'll pass it on to my grandson....
my Grandaddy's gun."
The gunshot injuries my grandfather suffered while serving in World War II took their toll over the years.  By the time I turned 18, he had trouble getting around.  But even when I had to help him in and out of the car and through the woods, he always wanted to go hunting with me.  It is an appreciation that I have a hard time putting into words, so I am glad songs like this are around to say it for me.  We had a lot of fun hunting together and I learned a lot about being an outdoorsman, a respectful hunter, and a good man.  Now he is in his late 80's and his health is growing more and more complicated.  I don't get to see him very often, but every time I get home, it is one of my first stops.  Thanks for everything Poppop!

Now I would love to make this blog interactive.  If you have something that was passed on to you by someone special, then share it here.  It can be anything and from anyone, not just a gun or from a grandpa.  Send me a blurb via email (drew@manpoweredfishing.com) with whatever info you want to include and feel free to send a picture as well.  Or you could simply comment below.  Or if you are a fellow blogger, then blog it on your site and send me a link.