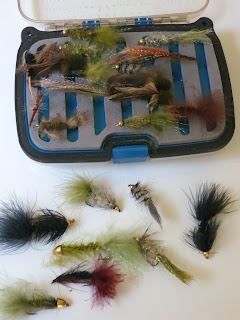 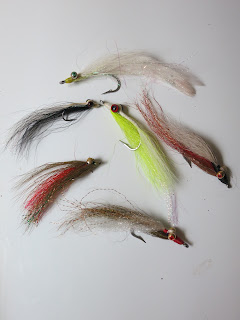 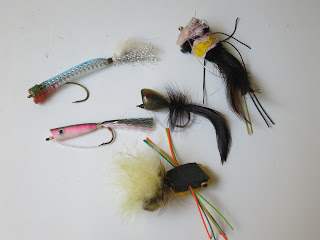 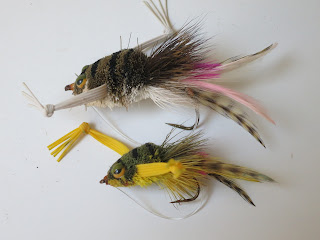 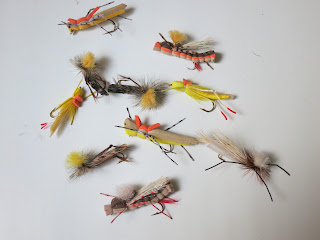 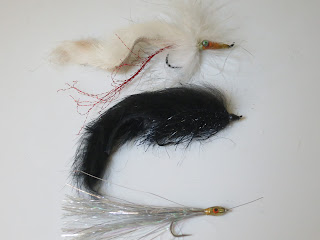 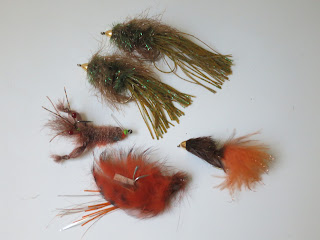 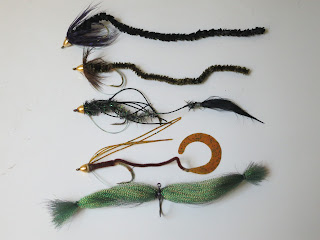 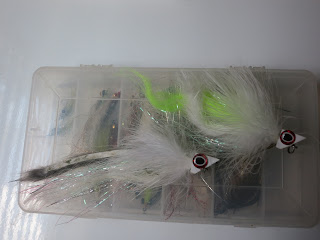 Of course, there are tons of other great flies out there.  In fact you could probably catch a bass on just about anything with rabbit strips and rubber legs.  I encourage you all to share your favorite flies in the comments and maybe inspire me to add a few flies to my box as well.  Until next time, tight lines!
Posted by Drew Haerer at 3:54 PM 8 comments

Well, that was a long stretch without a new blog post.  My sincerest apologies.  Life has been insanely busy, but fantastic.  In the past month the number of projects/papers at work has exploded, I got engaged, I have done a number of guide trips/lessons with Froggy Waters Outdoors, and Mary May and I have had all sorts of other obligations.  Now it is time to breath some life back into this blog. 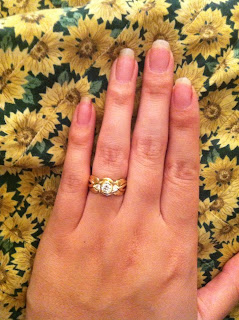 I took a few of Mary May's favorite rings and had them custom designed into one, then added my Grandmothers diamonds...super happy with how it came out!


I know I left off talking about fly fishing for bass and stripers.  I promise my 'fly choice' blog will be up tomorrow.  Today I am going to keep it simple and talk about the one short fishing trip I took lately as well as a new website I stumbled upon.

First the website.  If you are a beginner of looking for a nice fishing set for a gift or even for a kid, check out the Fishing Hut - Fish Sets.  The Fishing Hut site has a lot of great stuff, including some sets put together by British angler Matt Hayes.  The cool thing is that they have sets that target different species or styles - such as carp, saltwater trapping, fly fishing, and more.  Check them out and try something new.

Now to the fishing.  The rivers around here have been raging lately.  The only morning I could sneak away they were 3-10 times above normal levels, depending on the drainage.  Eventually I picked a fairly flat-water river not too far from Hillsborough, thinking that fish would be shallow in the flooded timber and willing to hit topwaters early.  I was wrong. 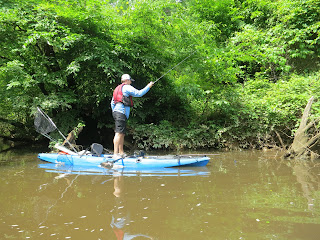 Flippin' from the Stealth-12

Santosh and I hit the river throwing various topwaters, including SOB buzzbaits and Rico Poppers.  Santosh managed a couple sunfish on a walker, but the bass seemed inactive.  We began paddling up-river to the nearest rapids, throwing a mix of topwaters, plastic worms, spinnerbaits, and crankbaits.  Finally, Santosh landed a 2.5 lber on a spinnerbait to get the skunk off.  The water was about 3 feet higher than normal and clearly had the fish off of their normal patterns.

A short time after, I landed a short bass on a Rico Popper and had a couple more blow-ups that never got hooked.  I tried a few more baits while Santosh attempted to hook and land a gar.  Although he hooked a few, it was not meant to be.  We started paddling back down river, speed fishing as we went while occasionally stopping to flip to thick laydowns while standing in the Stealths.  Finally, I flipped my bait toward some bank cover and felt a bite.  I set the hook and a chunky bass leapt from the water.  He was pulling drag and fighting like the 8 lber I knew he wasn't.  He darted for the channel, but got wrapped up in some submerged brush.  Miraculously, the fish stayed hooked and I was able to work my line free of the cover.  I boated the chunk and measured him at 19" and probably right around 4 lbs.  It was a nice way to salvage a couple of slow hours on the water. 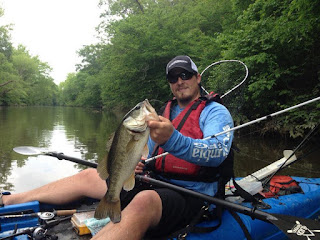 A 19" freight train
We packed up shortly after that bass and I headed to work.  It was a nice early morning escape that I need to make time for more often.  Until tomorrow...tight lines!
Posted by Drew Haerer at 9:53 AM 1 comments