The Flies have Arrived - Big Flies for Big Bass

You can't approach something like the "50 Chunks on the Fly" challenge with a box of wooly buggers and bass poppers.  I knew that in order to succeed, I needed some flies that target bigger bass.  Now, it would be misleading to say that I don't already have a few of those in my fly box, but you can never have too many big flies when going into battle.  Plus, I had spotted some cool designs online and had a few ideas of my own.

So, as I mentioned in a previous blog, I emailed by good friend Levi Blazer.  Levi now lives in Michigan and as a result is currently addicted to steelhead and salmon fishing.  But, he also chases smallies and muskies on the fly with good regularity.  Whenever I have an idea for a fly, no matter how out in left field, I contact him.  He takes my scatterbrained ideas and forms them into a design.  Sometimes that design already exists and sometimes he ties up some prototypes.  This batch of flies is a hodgepodge of existing mainstream patterns, existing local patterns and a bit of our ingenuity...mainly his.  The flies, minus a couple "top secret" patterns, can be seen below. 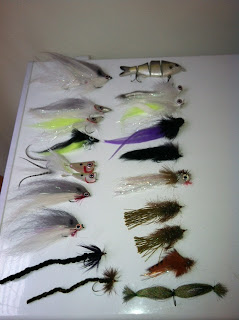 The Flies!  Note the 5" Swimbait for reference
Most of the flies above are shad or baitfish immitators.  I threw a 5" swimbait in there for a size reference.  I better stay strong in my casting mechanics this year!  The huge fly at the top is an articulated deciever inspired by patterns from Levi's friend Eli Berant.  You will also notice a twist on the traditional Taco Pescado, some Foam Head Minnows, chenille worms, and a few other patterns thrown in there.  The crayfish pattern looks super good in the water (I filled up the sink) and is a product of Mike Schultz.  A few of the patterns above are actually tied with rattles - just to give a slightly different look and sound.
﻿ 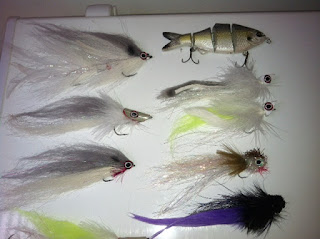 A close-up of some of the minnow immitators...and the big rabbit fur fly with rubber legs
Notice in the first picture that there is a black rabbit strip leech in the right hand column.  There is a specific technique that I want to try with that fly.  If it works, I think it could be a totally new concept for bassin' fly fishers - at least I have never heard of it being done before.  Details will come on that later...I can't give up all of my secrets at once.
﻿ 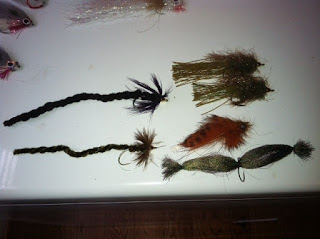 The bottom bouncers
You might notice that there aren't many floating flies/bugs/frogs/poppers in this group.  First, I am not a huge popper fan.  In fact, I think they incredibly overrated - at least traditional offerings.  Most are too small for my taste and have limited appicability.  If you are fishing a small pond or private lake, you might be able to fool a big bass with it, but in public waters, you are more likely to land a bream or short bass...if anything.  The poppers I do carry are longer than your typical popper and can be popped, spit, and walked.  These subtle differences and multiple applications, I believe, are why they consistently outfish traditional poppers.
When it comes to bugs and frogs, I do have a couple favorites.  In fact, I stumbled upon a pattern last year that is a combo frog-mouse-bug that has been deadly.  I don't even use it's name in public...that is how good it has been.  I just hope that there are a couple flies in this batch that turn out just as good!
In other "50 Chunks on the Fly" news, I bought another 8-weight fly rod.  I ended up with the Allen Fly Fishing Alpha II reel and AFF Xa rod.  Allen is based in Texas, of all places, and produces really nice US-made products.  They also have some good deals running right now.  And the Patagonia wading boots that I won from Grizzly Hackle Fly Shop via their Facebook contest.  Thanks again guys - they look great!  I am not sure how the metal bars on the bottom of the boots are going to work in the kayak, but there is only one way to find out.  With a little luck, it will be warm soon and the boots will be an afterthought until next fall.﻿
If you are interested in learning more about any of the flies above, shoot me an email (drew@manpoweredfishing.com).  Levi said he would be glad to tie a few for anyone interested.  Hopefully I can get my flies in the water soon and put chunk #1 on the board!  Tight lines!﻿
Posted by Drew Haerer at 3:10 PM