I know this is mainly a fishing blog, but I have had a bunch of folks ask for this recipe after I posted it on Facebook, so I wanted to share it.  If you already eat squirrels and want to try it, it is as good as any recipe out there!  If you don't, I highly recommend giving them a try.  I know it is cliche, but they don't taste much different than chicken.  Go find a local hunter and ask him to help you out.

One of the great things about food is how different, yet similar it is depending on where you are in the world.  Many cultures have put their own twists on what is essentially the same recipe. In Germany, and in places throughout the world with German descendants (such as where I grew up in central Pennsylvania), the above recipe is for traditional pot pie. Others may call it squirrel dumplings. Regardless, it is delicious by any name. 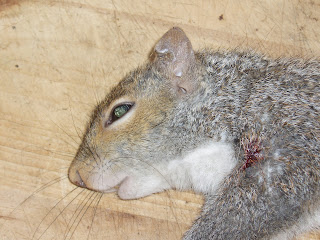 
Squirrel Pot Pie - Pennsylvania Dutch Style
I use about 5 "average" size squirrels (gutted, cleaned, etc).  I would recommend no fewer than 4.  The recipe makes about 10 healthy size servings.
1)  Put the squirrels in a fairly large pot and fill with water until the squirrels are covered or almost covered
2)  Add 1 tbsp oil and about 1/2-1 tbsp of salt to the water
3)  With the lid on, boil the squirrels for 20 minutes on high then reduce to the lowest temp that still allows the water to boil and let boil for another hour to two hours (I usually boil for about 1 hr 30 minutes total). Some folks say "until the meat falls of the bone", but I have never witnessed that.  In other words, I am not very patient when I'm hungry.
4)  While the squirrel is boiling, cube/chop 6 medium russet potatoes, 1 yellow onion, 3-6 carrots (depending on size). Some folks also like to use celery, but I am not a big celery fan so I don't use it.
5)  Also while the squirrel is boiling, cook 8-12 pieces of bacon and cut into moderate size pieces
6)  I also like to start my pot pie at this point. You can buy it from the store, but I make mine because it is pretty easy. I use 1 egg, 3 tbsp of milk, a couple pinches of salt and flour as needed (1-2 cups). Whip the egg thoroughly with a fork or whisk. Then add all of the milk. Add about 4-6 tbsp of flour at a time and whip with the fork. Repeat this until the mixture becomes doughy and can be rolled out. A lot of times I will double the pot pie portion of the recipe if I am making a larger batch. Of course, I am also partial to a lot of pot pie in this recipe. After you have it mixed, knead it for a minute or so then roll it out to your desired thickness. A lot of recipes recommend around 1/8" thickness, but I like to go a little thinner than that. Then just cut it into pieces about 1.5"x1.5" with some bigger and some smaller.
7)  When the squirrel is done boiling, grab it with tongs and set aside.  The water should look a little more like broth and have a few chunks of squirrel meat floating around
8)  Put all of the veggies and bacon into the squirrel water/broth along with about 2 cups of chicken broth.
9)  Add spices to taste...I add a healthy dose of Hungarian paprika as well as pepper, garlic powder and a pinch of salt.  Parsley is also a must, whether dried or fresh and should be added now.
10)  Covered, boil the veggies, bacon, and spices/herbs on high for about 5 minutes then reduce heat to the lowest temp which allows boiling.
11)  Now add the pot pie and boil for about another 7-10 minutes (basically until the potatoes and carrots are soft). The pot pie pieces will thicken up the mixture as they cook.
12)  While the pot pie is boiling, pick the meat off of the squirrels. Sometimes they get a bit of a film on them while boiling, so I try to clean that off.
13)  With about 2-3 minutes left in the boiling process, add the squirrel to the pot.
14)  Finish the remainder of the boiling process and you are all set. 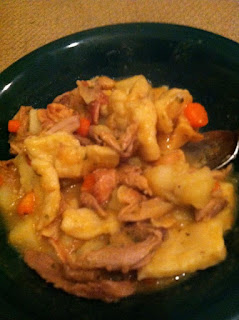 The finished product!
It is a great cold weather dish and goes particularly well with a dark beer or a glass of red wine.  Tight lines!
Posted by Drew Haerer at 2:51 PM