A few weeks ago, I posted a short blog that mentioned Shaye Baker and his "Quest for 100 Kickers".  For those of you not fluent in fishing, a "kicker" is a big fish that anchors a 5 fish limit in bass fishing.  Many anglers go after a limit of keepers first and then search for bigger fish to cull out the smaller keepers.  That big bass, typically at least 4 lbs, is what kicks your limit into contention for cash/prizes.  Shaye has also used the 4 lb standard to define a kicker.  He started his quest in September 2012 and will fish through the end of August 2013.  As you can see in his recent video blog, he is well on his way, but still has a long way to go.  I will be rooting for him!

Now rewind to how this affects me....well it doesn't.  But it did inspire me.  So after asking the public about the doability and logistics of my brainchild, I decided to attempt a quest of my own.  This year, I am going to try and catch 50 bass over 17" on the fly and from my kayak and/or wading and all on public waters.  I am calling it - "50 Chunks on the Fly", being that the word "chunk" is often used for bass that are good size, but not quite "kicker" quality.  So if you are a fly fishing enthusiast, this blog is going to be a little more entertaining for you than normal this year. 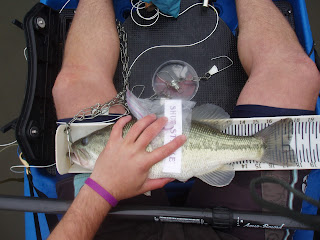 
Granted, I am not writing off conventional gear altogether.  I promise those traditionalists out there won't be dissappointed.  Maybe you will even find yourself being inspired to pick up a long rod?!
One thing that has been in the back of my mind as I approach this challenge is fly selection.  I have a few bass bugs in my box that I love.  They are mainly floaters and have been incredibly productive the past few years - including catching some big fish.  And of course, I also have a bunch of streamers and flies designed to be fished on the bottom.  But most of them are still fairly small.  So how do you maintain the action of a fly while upsizing it to target bigger bass, keeping in mind that it needs to remain castable.  In my case, I Google.  I went out and found as many awesome looking flies as possible, saved the links and sent them off to my good friend Levi.  Levi and I grew up together and he is an incredibly talented fly tier and fisherman currently residing in Michigan.  About once a year I tend to send him all of my scatterbrained ideas and he makes them into something that catches fish.  I am hoping he can really work his magic this year...I need it! 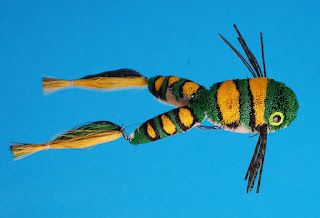 OK, this might be a little much...even for my taste


So, if you have a favorite bass fly I should know about, please comment below and let me know what it is.  Also, if you have pics, feel free to email them to drew@manpoweredfishing.com.

And last, but not least, as I was writing this I got a message from Grizzly Hackle Fly Shop out of Montana.  I won a new pair of Patagonia wading boots through a contest they held on Facebook.  I am ecstatic, in large part because my old wading boots have seen better days.  I think the soles have now been re-cemented about 5 times.  They will be an awesome asset for this years quest!

After speaking with the Grizzly Hackle folks and checking out their site, they seem like a great group of guys who love getting others introduced to fly fishing and the outdoors.  They even took the time to check out my blog, which I really appreciate. So, check them out if you get a chance.  They have tons of stuff available on their website and even more at their store in Missoula.