Another Fantastic Year...But 2013 Could be Even Better!

Well the 2012 deer season is officially over, so it is back to the water...and blog. My love of hunting was re-kindled even more this year and it was weird to wake up today knowing that I won't be stalking deer again until next fall.  But, I was able to put a buck and a doe in the freezer, so it was a good end to a year in the woods. 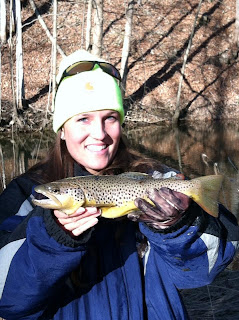 My last fishing trip of 2012 resulted in a few wild trout, including this gorgeous 16" brown that Mary May caught


My 2012 on the water was fantastic as well. In fact, it was probably one of my favorites. I didn't take nearly as many trips as some years past, but I caught a pile of fish, plenty of big fish and fished a ton of new water. The BASS Slam was the biggest highlight for me and was incredibly fun. I am already conjuring up ideas for a 2013 adventure trip. I also came up with a personal challenge for 2013. Thoughts on the adventure trip range from Maine to Wyoming to the northern reaches of Canada. Basically, I want to go off the grid and do something outside of the box. Hopefully I can come up with some concrete plans by March.

As for the personal challenge - it will be two parts. Part 1 is to catch a citation bass in NC. I have been within sneezing distance of a citation a number of times recently, but have not gotten over the hump. And like a fool, I didn't fish nearly enough last spring and this fall when fish were fattening up. Plus I didn't fish Shearon Harris, one of the best big bass producers in NC, even once in 2012. This year, I am determined to get that citation!

Part 2 is something I think will be awesome, but probably not easy. It was inspired by this quest by Shaye Baker.  His goal is to land 100 bass over 4 lbs from September 2012 to September 2013.  The last time I checked, he had 10.  I am hoping to catch 50 bass over 17"....on the fly and from my kayak. None of them will come from private waters or ponds - all public lakes, rivers and streams.  So if anyone has a favorite pattern - send it my way!

I will also be finishing the BASS Slam videos this year - starting with #3 - the Shoal Bass, which will be out tomorrow.  When I get all the videos out, I will write up a couple all encompassing blogs that detail the journey and fish with pictures.