It seems like my days off this summer have been filled with bad weather - turning my favorite local rivers to chocolate milk.  But this weekend I got lucky.  Tim Roach, winner of a guided trip giveaway from Quest for the BASS Slam and Froggy Waters Outdoors, and I decided to hit a river I have never fished before.  Our goal was to hook-up with a few stripers with some largemouth thrown in to keep things interesting.  I did some virtual scouting, read some river reports, and could barely sleep the night before.  However, this river had some obstacles.  It posed class four rapids, webs of islands you could easily get lost in, huge fluctuations in river levels due to upstream dam releases, power plant discharges, and a strong current.  In hindsight....it was my kind of place.

After a long drive into the middle of nowhere, we popped out at the river and set-up our float trip.  By 7:15 AM, we were on the water and casting away.  Within 5 casts, I had a small bass hit my buzzbait and run straight at the boat, jumping to spit the hook just before it reached me.  I was hoping it was a sign of things to come.

We fished a few holes and runs with topwater plugs, hoping to see a striper explosion.  I could envision it in my head and feel the adrenaline pumping through my body.  That feeling when a big fish blasts your topwater bait is indescribable.  But as much as I wanted it to happen - it didn't.  The striped bass were either not in that area or simply not hungry.  I waded through a chute into an upstream area with a few large boulders and downed trees.  I cast along a log with significant current flowing over it.  Once, then twice, then a third time....no takers.  I then cast about 5 feet above the tree and a fish immediately crushed my popper - sending it 3 feet into the air.  I guess it goes to show that the best looking spots aren't always the best producers.  This would become my theme for the day.

Two casts later, a bass which I suspect was the same one, nailed the bait again.  This time, he was hooked.  He fought hard in the current and had a gut that suggested he had been gorging on shad, bluegills, or other minnows.  The solid 1.5 lber was a good start.  I threw one more cast toward where I had hooked him thinking maybe there was a school in the area, but had no luck.  I waded another 10 feet upstream and cast under a tree branch that was hanging down in the water.  I twitched my popper, causing it to spit and gurgle as it glided in the current.  Suddenly, there was an eruption and I set the hook hard when I felt weight on the end of the line.  The fish went airborne multiple times and was peeling drag from my lightweight spinning outfit.  I waded closer and finally was able to lip him.  My popper was sideways in his mouth with one hook stuck in each side.  I guess he was hungry, although he too possessed a gut that suggested he had not been skipping meals.  The solid 4 lber was a great start to the morning.  We snapped a few photos and let him go. 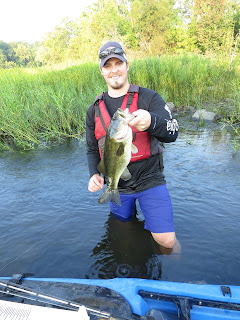 This 19" largemouth was a great start to the day
We floated on and both caught a couple smaller bass around some current breaks.  Then we descended on a long, flat stretch littered with wood cover along the bank.  Despite my best efforts, the bites were few and far between.  I had bream and gar nipping at my baits, but no bass.  Tim was having similar luck on the other side of the river, although he did have a few fish blow up on his popper.  The water looked too good to not hold fish, so I was rotating through a host of baits - spinnerbaits, poppers, buzzbaits, texas rigged worms, drop shot rigs, crankbaits, swimbaits, and jigs.  I tried a variety of colors, sizes, and shapes with no luck.  Finally, I cast out the spinnerbait and before I could even turn the handle a fish was pulling my yak hard right.  I could tell that it had some weight behind it.  As I got him closer to the boat, he began to spin to try and throw the hook.  I realized that the fish wasn't a bass, but he was a slump buster.  I landed a 7-8 lb channel catfish.  Things were looking up again.

A short time after, Tim spotted some bass staging on a rocky flat.  He mentioned that the fish seemed skittish.  For me, that meant it was time to tie on a finesse worm - a bait that often gains the interest of sluggish and/or wary bass.  After another fifteen minutes, I had unlocked a pattern.  The pattern was having no real pattern at all.  I would throw my finesse worm as far as possible toward cover, flats, or holes in the grass mats.  Sometimes I would get bit and sometimes I wouldn't.  But it seemed like most of my bites came in the middle of nowhere.  I would fish by perfect looking downed trees and mid-channel boulders without the slightest sign of life.  Then, casting randomly over the river grid, I would hook a 2 lber.  It was a bizarre bite. 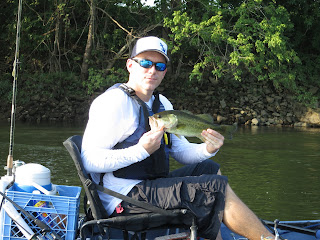 Tim began hooking fish too - including a few on a tube style bait.  Then, for no real reason at all, I picked up my buzzbait.  I began throwing it, somewhat haphazardly, toward every boulder, current seam, and log I could find.  Again, the usual spots weren't producing.  But I would get bit in what seemed like the middle of nowhere.  After catching a few on buzzer - a black, double bladed bait which has seen better days - my confidence was building again.  If I couldn't pattern where they were, at least I could pattern what they were eating.

Then, after having been standing for the previous half hour, I sat down again and took a cast toward a small log near a weed line.  Maybe my body knew what was about to happen.  I cast the buzzer and began reeling as I turned to talk to Tim.  Suddenly, I heard something suck in my buzzbait and felt the weight of a fish on the line.  My 7'10" rod was bowed and the fishing was pulling me against the current.  I quickly loosened the drag a few clicks as she headed for the weeds.  She never broke the surface of the water, but instead fought hard using the current and weeds to her advantage.  Finally, I got her to my yak and lipped her.  She was a brute - the kind of river bass the makes a day, week, and month.  Again, we snapped a few photos and watched her swim back into the mass of weeds from which she came. 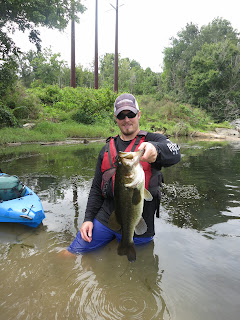 This fish will be remembered for a long time

Then the fishing turned up a notch.  Tim also tied on a buzzbait and we were in the zone.  Floating between islands in the ribboned channel, we were either catching fish, getting blow-ups, or seeing fish follow at every piece of wood cover or indent in the weed bed.  We even had gar trying to smash our buzzers, including one that was pushing 20 lbs that nearly gave me a heart attack as he launched at my bait right next to the boat.  There is just something about a good buzzbait bite that is addictive.  We didn't want to leave.

Alas, after 20 to 30 bass a piece, a few bream, and the catfish, we were at the take-out.  Sometimes that means you can fish a little longer, but we knew a discharge was scheduled for later that afternoon and we didn't want to cut it close.  The end of this stretch poses a class IV rapid (with lower water conditions) that drops roughly 6 feet.  We both spent a little time looking at it from the top before I decided to go the safe route - dragging my boat down over some rocks well to the edge of the main chutes.  Even that route proved a bit tricky.  As I lowered my yak through a small chute, I slipped, the boat got stuck between two rocks, and a couple items got swept our of my yak.  Thankfully I was able to swim and get them back with no real harm done.  This is when Tim decided he wanted to try and run it and asked me to film it.  I asked him if he was sure and if he wanted me to take anything.  He said he was sure and that he was good to go.  Part of me was thinking it was a bad idea, but that part was greatly overshadowed by the part of me that wanted to run it myself.

I paddled out and got set-up with the camera.  It was difficult to film as the water spun me sideways.  Finally, I found a small eddy and focused on Tim and his Jackson Coosa.  He made it down the first drop without any problems.  Then the current took over.  It was pushing him toward a large boulder in the middle of the rapid and he couldn't do much of anything about it.  The boat hit sideways and moments later Tim was in the water.  I was torn between wanting to film more and going to help.  I waited a few seconds...they seemed like minutes.  Tim didn't immediately pop up, so I stopped filming and started paddling.  Thankfully, he did come to the surface moments later.  I made sure he was OK and started gathering what was left of his gear.  The river Gods were not kind - taking some rods, reels, and lures to the depths.  It was a fitting end to a river adventure.

The day had some ups and downs, but it was a great day by any standard.  I really enjoyed my time with a new friend and on a new body of water.  Catching a bunch of fish and some big fish was just icing on the cake.  There is no doubt that there will be a a return trip to this river sometime this fall.  However, I don't think either of us want any sort of revenge with those rapids.  The water levels have to be right to run them safely and they are difficult to maneuver.  I strongly urge anyone reading to always use caution when on the water.  The number of ways accidents can happen are innumerable.

One thing that can be challenging when fishing new water is what lures to throw.  I literally threw 20 lures over the course of the day, but in the end, I went back to my favorite few baits that I feel most comfortable with.  I know there were some areas where I could have caught more fish if I had slowed down and fished them differently - possibly with a drop shot or shakey head.  But, I was catching fish and having fun, so I didn't bother.  The bottom line is that fishing is about confidence and you have to feel good about whatever it is on the end of your line.

Of course, it poured here in central NC the past two days, so another long river trip might be weeks away.  Hopefully, I get out sooner rather than later.  Until then - tight lines!
Posted by Drew Haerer at 2:47 PM