No-one who has fished with me has ever accused me of not working hard to catch fish.  It might be paddling that extra-mile, fighting the wind to stay in a key area, wading through knee-deep muck and mud, backsliding down an 8-foot clay bank, pulling my yak behind me from shoal to shoal, or stomping my own path through shoulder high brush.  I will do whatever is needed to catch fish.  Sometimes this means I have to scale back my endeavors when other folks come with me.  After all, I want them to keep coming back.

Last Saturday I ended up not fishing the NCKFA tournament I previously mentioned on MPF.  The repairs to my car took longer than expected and it wasn't ready on Friday.  So, I was stuck without a good way to get my yak there and some of the usual suspects from the area also weren't fishing the event.  I debated, and debated, before finally deciding to skip it and go fun fishing.

I headed out to a local flow with Mary May and a good friend of ours - Santosh.  Santosh is a carp fishing addict who also heads up the Duke Fishing Club/Team.  We decided to try a short wade trip on a local river I hand't fished in a few years.  This particular stretch of water is suffering due to some water quality and conservation issues, but it is close to home and typically has a few bass around.  However, it does take some effort to fish.  Fishing there means trudging through weed beds, boulder hopping, sinking into silt, crawling down banks, wading all over the place, and flat out bushwhacking.  Thankfully, my fishing partners were more than up for to the challenge.

The bass seemed a little lazy - or simply their numbers are dwindling due to the issues I mentioned above.  However, it didn't take long for Mary May to put fish #1 on the board - a chunky largemouth that nailed her worm on the edge of a weed bed. 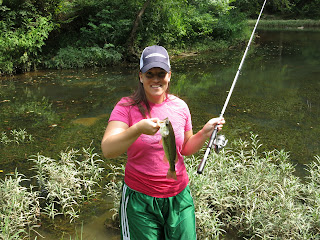 Mary May also won the award for best color coordinated outfit on Saturday
The river was weedier than in years past, but then again, so are most southern rivers after the warm spring we had.  We fished a few deep pools before making a hike down river to fish another stretch.  Eventually, we found another pocket that had a few fish.  In fact, at one point, Santosh and Mary May managed a double.  Mary May happened to feel her fish bite just as she was slipping on an algae covered rock.  Somehow she managed to set the hook, regain balance, and land the fish. 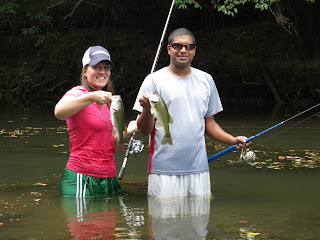 Duke Fishing Representin'
A few pools later, Mary May landed her third bass and was putting the guys to shame.  It was some time after this that I finally regained a little pride and got on the board with a couple small bass of my own.
The bite remained slow and after a few hours we were wet, tired, hungry, dirty, scratched up, bug bit, and ready for a nap.  That happens to be exactly how I like to feel after a day on the river.  So we hiked back to the trucks to head for home.  We had a lot of fun and big props to MM and Santosh for kicking butt out there.  If you ever want to do a river adventure, whether via wading or kayak, drop me a line...you won't regret it.
It wasn't a great day, but certainly not a bad day either.  Of course, if it was a great day, MM would have caught about 5 times as many as the guys.  We caught fish on t-rigged and wacky rigged plastics fished on medium to medium heavy spinning rods.  Actually, all three rods in use were from Carolina Custom Rods, who I believe puts together some of the nicest finesse rods I have ever touched.
Since the Escape is finally back in the driveway, it is time to start thinking about weekend plans...and you better believe they will include putting a pair of kayaks on the roof.  Tight lines!
Posted by Drew Haerer at 4:03 PM