I haven't been on the water much lately between travel and work, but this past weekend Mary May and I headed north to Virginia to fish in the New River Open.  The tournament was part of the larger New River Fest 2012, which included a number of other events and competitions.  I had never really fished the New, so I was eager to see what it had to offer.  A decade ago, it was one of the best smallmouth fisheries in the country, but recently it has struggled.  It is rebounding, but reports going in were that big fish are hard to find.  Mary May was equally excited about fishing her first ever tournament and also getting to float a river with some significant rapids.

We got to VA around 10 PM on Friday night and headed to our campground.   I should note that this area, and much of Giles County, was without power for over 8 days due to the incredible storms they had the week prior. So, we were without power for our stay, which made things a little more interesting.  Also of note was that the campground was flanked by a railroad track, which had been blocked by downed trees much of the week.  Of course, the night we arrived was the first time it had been used in nearly a week and they were making up for lost time.  It made sleep difficult as trains rolled by throughout the night.  But we savored the sleep that we did get and were up early to go to the captain's meeting.

The one real bummer about the weekend was the captain's meeting.  It was held at 7 AM the morning of the event, so we missed out on the morning topwater bite and had much less time to float our stretch - considering it was light at 5:30 AM.  Regardless, the folks at New River Outdoor Company were great and did a great job with the event.  They set-up categories for both inviduals and teams in smallmouth, musky, and panfish categories.  We picked up our identifiers, went through the rules, and headed to our launch.

We put-in north of Parrott, VA and floated down to the campground where we were staying - about 3 miles total.  The river was packed with folks all day - fishing from motor boats, yaks, and canoes or wading.  It was one of those days where I wish I would have had a practice day previously, because as we found out, the river can be tricky.   We quickly encountered a class II rapid that included a 2 foot drop and then a second of about the same height.  Below this rapid came the worst part of our day.  Mary May was fishing a large eddy and her bait got snagged.  She couldn't get it dislodged or break the line and was being pulled toward the rapid.  She did a great job staying in the eddy, until suddenly a whirlpool area caught the back of her boat and sucked it under.  It knocked her out of the boat and treated her to a nose full of water, but the yak did stay upright.  She made a swim to dry land while I grabbed her boat and towed it over.  We were both a little shaken up, but to her credit, she really hung in there and was willing to keep at it.  I can't credit her enough for hanging in there.

The second worst part of the day came about 100 yards down river.  We pulled our yaks onto some rocks about 30-40 feet off of the bank and began wading out to fish a couple big chutes.  We had avoided these rocky, technical class II chutes in order to take the safest route.  As we were walking I heard someone yell out to us, so I turned and saw a man who had driven his golf cart the roughly 50 yards from his house to the river bank.  I turned and walked past the boats to shore to see what he wanted.  He asked why we had pulled up there and if we had seen the no trespassing signs.  I told him that we had not seen the signs (because we hadn't been very close to the bank), that we wanted to avoid the rapid because Mary May had just had a rough experience with the previous one and that we had pulled the yaks up on the rocks to fish the pool below.  His response was that what we were doing was "docking".  My response was that we were sorry and that we had assumed that being well off the bank was OK and that we would fish it for a minute and be off.  His response was, "Well, you aren't doing anything wrong, but the signs say no-trespassing."  I sat for a second, trying not to contemplate my response the oxymoron.  He clearly wanted us to leave, yet also told us we weren't doing anything illegal.  My adrenaline was already pumping after Mary May's spill and I didn't want to escalate the situation.  I re-iterated that we were well off the bank in order to avoid any land ownership issues and asked if it was OK if we stayed there long enough for a few casts.  He mumbled something to the effect of private property again, including something about there were plenty of places to cross the rapids.  Being perfectly honest, the only other easy spot was on the far side of the river (and the New is a wide river).  Much of the rapid was fast, rocky, and technical.  It was not meant for a beginner who was already a little shaken-up.  I apologized if we intruded on his land and went back out to tell Mary May it was time to keep floating.  Those of you who know me well know how rare it is for me to lose my temper.  But that guy almost caused me to do it.  I understand the rights of property owners and river etiquette quite well and never have I felt as slighted by a land owner.  Anyway....back to fishing.


It took until about 11 AM before we figured out a pattern.  The pattern was don't bother with anything but plastics.  The fish didn't care about spinnerbaits, topwater, jerkbaits, or any other hard baits.  I think crankbaits would have worked better, but most of the river was too weedy to throw them.  We finally found a deep ledge and started catching fish regularly.  Mary May was nailing them on a 4" stick worm and I was using a 3.5" tube - both in green pumpkin.  We landed a bunch of smallmouth bass under 11" and a few rock bass.  Thinking that we were on to something, we didn't measure one of Mary May's rock bass that was probably around 7.5".  This would come back to bite us later. 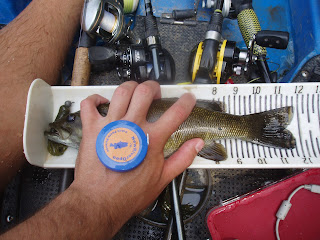 Hey, ya gotta start somewhere!
A short time after this, I switched to a drop shot and that is when the fun really began for me.  The smallies were crushing the rig - which included a 1/8 oz weight below a 4.5" Roboworm.  Mary May was still getting bit too and we were having a blast.  We landed some nice smallies and small rock bass between then and 1:30 PM, when we arrived at the take-out.  Unfortunately, I lost a big smallie about 1/3 mile above the take-out because I didn't re-set my drag.  That would also come back to bite us.  We also had to skip some great looking water because we were running late for our shuttle.  As I finish writing this paragraph, I am realizing how many things really did not go our way. 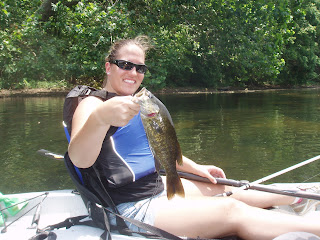 It turned out that our shuttle was also late and we had to really hurry in order to make it to the weigh-in on time.  We just made it and checked in our fish.  After the NROC folks looked at the photos, they announced the winners.  I should note two things here.  First, there were over 50 entrys and we were the only non-locals.  Second, we were the only entrants to not be fishing out of motorized boats.  As they announced the winners, we found out that in the team division we had missed third place in the panfish category by 1/4" and the smallmouth category by 1".  Had we measured Mary May's biggest rock bass, we would have been either 2nd or 3rd as a team.  And had I been able to land that smallie, we would have been in 3rd place as a team.  Although we were a little bummed, we were very proud of our finish.  In the invidiual division, I came in 4th in the panfish cateogry and around 6th in the smallmouth category.  There were some impressive fish caught, including a 20.25" smallie and a 10.5" rock bass.  There were also a couple musky over 45" that were landed.

Although we didn't come away with prizes, we did have a great time and walked away very happy (albeit exhausted).  We caught a pile of smallmouth and learned a lot about the New River.  I don't think this will be the last tournament we do together.  I was also really, really impressed by how the Stealth 12's handled that river.  I can't say enough about how much I like these boats.

Before I wrap this up, I want to mention one last thing.  We found out at the weigh-in, that a man had died on the river that day about 10 miles from where we were.  They found his body in 14 feet of water.  They believed he stepped off a rock and got swept away.  He was not wearing a like jacket.  I do not know if alcohol was involved, but I know we saw a TON of folks drinking on the river.  I don't want to get up on my soap box for too long, but when you are on the water - especially rivers with class II-III rapids like the New....BE SMART!  Always wear your life jacket and save the drinks for the end of the day on dry land.  It pains me to see folks not wearing their PFDs when fishing big rivers (or lakes).  And I know way too many folks that regularly drink or do other illegal things on the water.  Please, use your head when kayaking/fishing and always air on the side of safety.

A huge thanks to Mary May for fishing with me and being a trooper...not to mention soar lipping plenty of bass.  This is going to be another crazy work week, but hopefully I can find some time to hit the water soon.  Until then, tight lines!
Posted by Drew Haerer at 3:05 PM