I grew up doing it all - playing every sport I could, dabbling in musical instruments, camping with the Boy Scouts, collecting rocks and coins, and amassing grass stains. But my favorite activity of all was being "knee deep". The creek that ran next to my house was a virtual paradise for a young explorer. I remember creeping through pools catching crayfish, building dams, and catching trout on anything we could. As I grew older, my love for being knee deep never changed. I spent a lot of time learning the art of fooling Penns Creek trout as well as finding giant smallies in the Susquehanna and Juniata Rivers. In college and grad school, I pursued environmental degrees and always tried to do as much "field work" as possible. It was actually during college that I found out my childhood dam building was technically illegal. It turns out that building dams of a certain size on native trout streams is against the law in Pennsylvania. Thank goodness our cobblestone concotions were constructed with the engineering knowledge of 10 year olds and made no serious impact.

Now I do most of my fishing from a kayak. Those that fish with me will probably note how often my legs are draped over the side of the yak and dangling in the water....even in mid-January. I guess you could call this being shin deep. However, from time to time I escape to one of my favorite rivers here in North Carolina and I don't take my paddling gear. This particular river cuts through Durham and resembles a trout stream more than a bass haven. It is perfect water to wade and chase largemouth and Roanoke bass. It is where I cut my teeth when I moved to Durham a few years ago and a river I don't visit nearly enough these days.

But this past weekend, a good friend gave me a call and asked if Mary May and I wanted to wade for a few hours. I was excited at the idea of revisiting an old haunt - one where I had caught many a largemouth in the past. Mary May was more cautiously excited. Her dislike of snakes always makes her a little cautious when committing to a wade trip. I assured her that we probably wouldn't see any snakes as we loaded the car and headed south. It was amazing how much easier it is to pack for wading than for a day of yak fishing.

We arrived, geared up and hit the water. We spent the next few hours creeping the shores of the river and occasionally wading out to get to particularly bassy looking spots. I reminisced with Wendy and Mary May as we walked upstream. "I lost the biggest bass I have ever seen on this river right over there", I said, as I pointed to an amalgamation of trees and debris. Then I proceeded to tell the story of the one that got away. We talked about all sorts of fishing and life related experiences as we meandered along the bank. It was a great day with two amazing women. We landed a quite a few fish, including a solid 3 lber and Mary May's first ever bass from this river. It left me wanting more.... 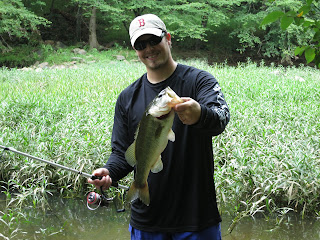 A chunky bass from this small, suburban flow

I will sidetrack here to note that I haven't named this river (although many can probably guess). When I first got to NC, I often shared the names and locations of all of the places I fished. I have always believed that getting people involved in the outdoors is a good thing. However, I was met with a lot of resistance - mainly on the notion that the attention would ruin smaller fisheries such as the one I discuss above. Some folks went out of their way to belittle me for it and others sent messages of appreciation. It is a tough situation and one that I am still trying to figure out how to balance. Part of me thinks that not sharing river or lake names is a little self-centered (we aren't talking about exact lat-long coordinates). At the same time, I am 100% sure that this little river has seen a big increase in fishing pressure - in part because of my posts, stories, and pictures. There is no perfect solution and probably never will be....unless we could magically get all anglers to be conservation minded. In other words, there never will be. Now back to fishing....

On Tuesday this week I busted my hump to get work knocked out early so that I could escape to the river for a few hours in the late afternoon. Nothing makes me long for a fishing trip more than staring at a computer screen all week. This time I headed out solo to explore a stretch of river I hadn't fished in well over two years. It is a boom or bust area that requires a long walk and some hard wading.

It was weedier than past trips, which made the wading even tougher. Bream and other creek minnows darted in and out of grass clumps as I waded. I would cast to holes in the grass mats, which typically returned bites from bream or small bass. Finally, I got to an area where the creek bottom became rocky and the weeds subsisted. I began casting to shady areas, deeper pools, and wood cover and was regularly enticing bass in the 10"-14" range. Then I got into a stretch where the Roanokes seemed to be everywhere. Most would grab the tail of my 5" plastic worm and run with it, without ever getting the hook. However, some of the bigger fish did come to hand, including the biggest of the day. He had a huge head and would have been VERY impressive in the early spring when they are fattened up. 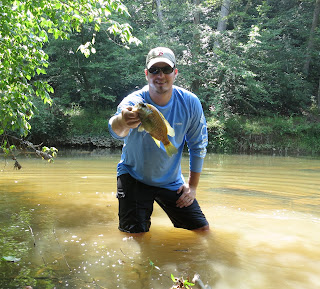 A strong, mid-summer Roanoke bass
The rest of the day was hit and miss. My two favorite brush piles had been wiped out by high water, so I focused on fishing slow through some deeper troughs. I was landing bass, but none over about 2-2.5 lbs. Eventually I reached my usual turn-around spot, but since I had a little extra time I decided to keep going. I stopped in a stretch with a nice, long riffle and hunkered down on a large, mid-channel boulder. I caught up on emails and lit a cigar I had picked up at a wedding last month. I smoke about a cigar a year, but the sweet smell of the smoke seemed to fit with my surroundings. I have no idea if it was a "good cigar" by traditional standards, but at one point I had dragonflies land on both shoulders, so I will take that as mother natures way of saying that it was.  After I had my fill of the cigar, I dipped my head in the water and trudged onward. 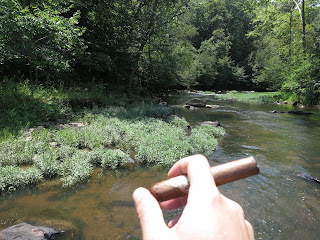 I don't often smoke cigars, but when I do, I do it mid-river

I managed two solid bass near a log in the next pool, so naturally, I kept wading.  Unfortunately, I wasted the next 40 minutes wading down - and then back up - a shallow, weedy stretch that tested my ankles and shins.  Deflated, I kicked it into overdrive and headed back toward the car.  A storm was blowing in and the sky was getting dark very quickly.  I did make a few casts to prime looking spots and ended up with a few more small bass.  By the time I reached the parking lot, my legs were exhausted and I was more than ready for a glass of cold lemonade that awaited me at home.  The big bass I was hoping for didn't pan out, but I did end up with 27 fish - 6 Roanoke bass, 1 bream, and an even 20 largemouth.  I had no complaints.

Although wading isn't for everyone, I do strongly recommend going knee deep...at least once.  Until next time, tight lines!
Posted by Drew Haerer at 2:45 PM