Back in the Saddle!

I apologize for the total lack of posting lately.  Work has been on overload and we have been traveling on the weekends.  However, Mary May and I did hit the water this past Saturday in our first ever tournament together.  That blog, discussing our New River adventures, will be out tomorrow.

This was the next closest thing I did to fishing in the past couple of weeks.... 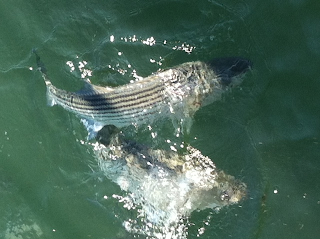 These atlantic stripers loved oyster crackers as much as I love Maine lobster
At a seaside restraurant in Noank, CT (near Mystic), the stripers favorite food seemed to be oyster crackers.  Although, they ate just about anything we tossed in.  The biggest looked to be about 25 lbs and there were roughly 20 in the school. 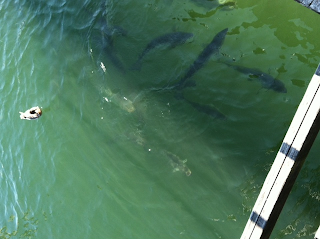 And of course, the human food was pretty darn good too.  I am missing the steamed clams and lobster already!  I gorged on the ridiculously cheap lobster and seafood during the entire trip, and created what Evan Howard deemed the "Lobster Slam".  I think MM and I ate lobster 8 different ways....not too shabby. 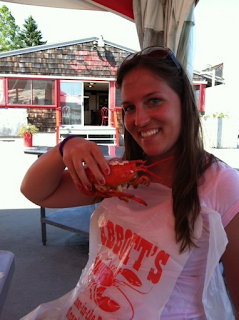 MM enjoying a yummy lobster before we headed back to NC

I should also note that I had a birthday last week - one year away from the big 3-0.  Thanks to MM, I picked up another hobby...one that I have been wanting to pursue for quite some time.  A couple days before my birthday, we headed to Buttermilk Creek Outfitters and picked out this beauty - a Mathews Mission Riot. 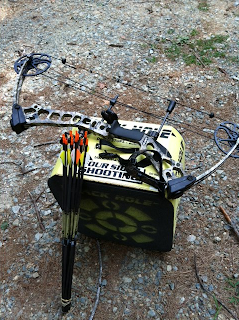 My new bow!
And on the first night of shooting, I managed this crazy feat - a Robin Hood (shoot one arrow directly into another).  It happened while shooting a set of 3 from 30 yards.  Hopefully it is a sign of things to come! 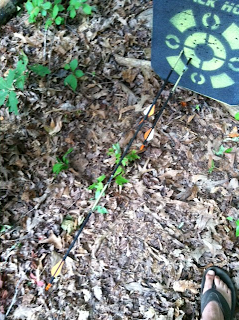