A few months ago I was in the market for a new spinning reel.  One of my previous reels had met its fate at the bottom of a river.  The other took the brunt of a fall while doing some wading.  It was no match for the rock it connected with at full force.  After shopping around, I decided to try out the Abu Garica Orra S.  It is a new spinning reel and has a lot of features, as well as a very palatable price tag.

Immediatlely I was impressed by how light and smooth it was.  It also has a very sturdy build and is pretty sharp looking to boot.  I bought the size 30 and spooled it with 8 lb Seaguar fluorocarbon.  The drag felt smooth and it paired very well with my Carolina Custom Rods shaky head/drop shot rod.

Over the course of a number of trips, I have caught bass ranging from 10 inches to 6 lbs.  I have also caught catfish up to 24", a 26" bowfin, and a number of panfish.  I was amazed at how well the reel managed each.  A lot of spinning reels fall into categories.  Either they handle larger fish well, but aren't very sensitive for fishing light lures or they are very sensitive for fishing small baits, but have issues when it comes to handling bigger fish.  I thought for sure the bowfin would break my line, but it didn't.  I also thought the 6 lb bass, which was caught near some vertical pilings and cables, would get wrapped up and break me off, but it too was landed.  With the Orra S, I was able to control the fish and also not break the line.  Granted, some of this is due to the rod and the line, but the reel plays an underrated role in fighting big fish. 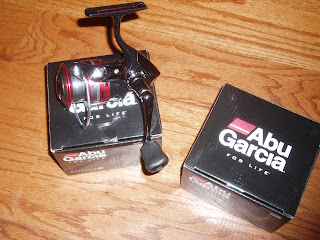 A couple months after I bought this reel, I ended up having one of my older spinning reels also get mangled.  I put in an order for two more Orra S 30's - the second of which will go on a spinning rod that has needed a reel for about a year now.  As many of you know, I get very wrapped up in choosing my gear and when I find something I like, I stick to it.  This reel has REALLY impressed.

I will note, there are a few features on this reel that could be upgraded - particularly the screw in handle.  And of course, only time will tell how the finish and parts hold up.  But so far, I can't say enough about this reel, especially at the $70 price point.  Check it out!
Posted by Drew Haerer at 4:00 PM