Last Thursday Mary May had a half day at work, so I made sure to put in a little over time in advance so that I too could take a half day.  We didn't have a ton of time, but decided to grab the yaks and head to a local lake to chase some catfish.  Catfishing holds a special place in our hearts - after all, it is what we did the first time we met.  Plus, this particular lake has some fairly big cats, including a beast that broke Mary May's line last spring.

When I go catfishing, I like to keep it simple.  I typically use chicken livers, cut bait, or chicken marinated in garlic and fish it on a Carolina Rig with a size 2/0 or 3/0 circle hook and a 1/2 oz or more barrel sinker above a swivel.  Realistically, the fish I target are 20 lbs or less.  If I caught one bigger, it would be awesome, but when I catfish I am out to have fun rather than trophy hunt.  One of these days I do need to trophy hunt from a kayak, but I digress.  I use 8-15 lb fluorocarbon line and medium to medium heavy bass gear.  If you catch a big cat on that set-up (10 lbs or more) then you are in for a fantastic fight.

On this particular afternoon, we armed ourselves with chicken livers and minnows.  I typically prefer fishing for cats at night, but if you can find good areas you can catch them all day.  We pulled up to our first spot and got set up.  After 30 minutes of nothing we moved a little more.  And after another 15 minutes without a nibble we moved to a location that had been particularly good to us in the past.

We made the short paddle across the lake, anchored using our YakAttack Park N Poles, and threw our livers toward a drop off.  If you have done much fishing with chicken livers, you may know how hard they are to keep on the hook.  It can be downright frustrating at times!  Although there are lots of tricks out there to help, I find the simplest way is to just make sure you try and hook some fat or signew when you put it on the hook.  Also, cast the rod without the same wrist snap you using when using artificial baits.  You need to lob livers to keep them from breaking free of the hook. 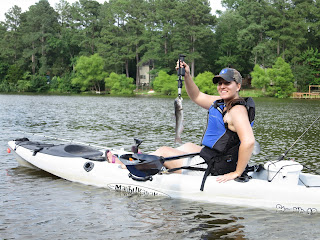 So anyway, we didn't have to wait long before our first bites.  In fact, we doubled right off the bat....Mary May's was bigger.  Then we doubled again....and again hers was bigger.  Then I decided to switch things up a little and try some cut bait with one of the bigger minnows that had croaked on us.  That turned out to be a good decision.

Over the next hour or so the cats were eating everything we threw at them and we had caught a bunch of  decent size cats, albeit a little on the skinny side.  My biggest came when I threw my cut shad right along the bank near the drop off.  As soon as it hit the water a fish nailed it and ran like crazy.  I could tell that it was a big fish by the bend it was putting in my rod and it was going nuts.  I could feel the head shakes as it ran for deep water.  It fought and fought before finally surfacing.  It was a really nice size catfish for the little lake we were fishing.  It was a little on the skinny side again, but it was a long fish - measuring roughly 24".  We took a few photos and let the brute go. 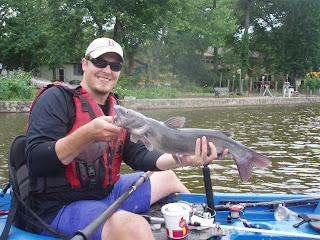 The bite slowed a bit after we caught the bit guy, but we were still catching them and having fun.  Finally, we both started to wear down and tried one last spot.  I only got one bite there, but it was a really nice bullhead (or mud cat).  In fact, I think it was the biggest I ever caught.  I should have gotten an official measurement, because it was somewhere in the 13"-15" range.  If it reached the 15" mark, it would officially qualify for an NC Fishing Citation as a trophy fish.  I don't really care about having the actual piece of paper in hand, but I do like knowing that I accomplished the feat.  Rookie move Drew!

We then headed for shore, loaded the yaks, and swung by Cookout for some delicious post-fishing milkshakes.   It was a great ending to a great day with a great woman....and a perfect trip to commemorate blog post #100!  Tight lines!
Posted by Drew Haerer at 1:15 PM