About a month ago my friend Santosh, who heads the Duke Bass Fishing Team/Club, asked if I would be interested in fishing the UNC Charity Bass Fishing Tournament this year.  I have wanted to fish this tournament for the past couple of years, but have always had other obligations.  So, this year I jumped on the chance - especially since my grad student status ends this spring and I am VP of the club until then.  The tournament has been held annually on University Lake in Chapel Hill/Carrboro, NC and has included NC State, UNC, UNC-Greensboro, and Duke.  This year, like last year, only two schools competed - Duke and UNC.  We were all there for charity and to have fun, but you could tell on the faces of many of the competitors that bragging rights were on the line and everyone wanted to win in this rivalry mathch-up.  Last year, UNC came away with victory with an impressive 22 lb pre-spawn bag.  A couple of young Blue Devils were second with 20+ lbs and another UNC team came in 3rd with about 20 lbs.  The 2nd and 3rd place teams both returned this year and we knew it was going to be a great day on the water.  However, I knew it was going to be tough as post-spawn conditions, high temperatures, and blue bird skies were not going to make fishing easy.

We met at 6:30 AM and got our jon-boats loaded with our gear.  A few of the UNC folks were running late, so we didn't end up launching until closer to 8 AM.  I believe there were 8 or 9 boats that scattered across the lake.  Santosh and I headed for a long point with some stumps, logs, and wind.  It looked perfect, but we couldn't get a bite.  I noticed it was particularly shallow and the bottom was full of leaf litter, so I focused on throwing a topwater.  Topwater baits can be very effective during the post-spawn period when bass are guarding fry.  About 20 minutes later I would land our first bass of the day who crushed my Lucky Craft Gunfish near some cover.  The fish was in the 2-2.5 lb range and got our blood pumping.  We continued fishing down that bank, thoroughly covering the water with spinnersbaits and topwater as well as pitching plastics.  The wind was blowing on this bank and there was some fantastic cover, but we could not buy another bite.  I knew we had to change up the game plan.  Based on what I saw on the lake map and what Santosh had seen the year before, I decided we should roll the dice and head to the north end of the lake.  The only problem was that it took some serious effort to get to where we wanted to go.  It was one of those gambles that can really make or break a day, but my gut said we had to try. 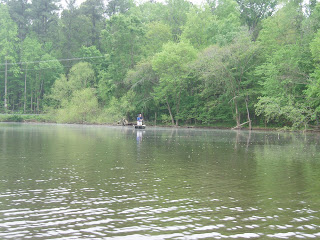 Chris and Krishan working down a bank


After some work, we arrived to find a fairly isolated area, which had good wood cover and some grass.  We fished down one short bank without a bite and I suggested we try a different approach - flipping and skipping finesse plastics with little to no weight.  Ten minutes later I cast to a large log and felt a bite.  The fish nailed the bait and took off for the channel.  By the time I caught up to him, I could tell it was a nice fish.  With Santosh's help, we landed the 4 lber and were very happy with our decision.  On the next cast, Santosh hooked a solid 2 lber and we were quickly within 2 fish of our limit.  Next we came upon a small beaver dam and I hooked into another solid bass.  He was pushing 3 lbs and at this point we could barely control our excitement.  But then things took a weird turn.  We were fishing some great looking cover, but couldn't get bit.  We were wondering if the late morning shift in weather was changing the pattern.  However, around 9:30 AM Santosh hooked into a solid 2 lber by flipping right into the heart of thick laydown while I was getting my snagged bait out of the same lawydown.  That rounded out our limit and put us in pretty good shape.  We knew we had a decent post-spawn bag, but we were definitely hoping for more.

One of the other Duke teams had wandered into the area we were fishing just after we had caught our 4th keeper, so at this point we stopped to let them know about the pattern we had found and decided to see if we could replicate it out on the main lake.  We decided to run and gun a bank with a lot of wood cover and on my second cast I landed a solid fish, but he wouldn't help us upgrade.  5 minutes later I landed another fish, but again, he was just a little smaller than then smallest fish in our livewell.  This would be the pattern for the rest of the day for us - we kept catching fish, but couldn't get any signficant upgrades.  We did both miss a couple of fish that could have helped - including one that hit my worm at the base of a big cypress tree, but we will never know.

We went on to land 15 fish with most in the 15"-16" range.  Three of them we caught within 25 yards of the launch while targeting docks.  We also caught fish fairly regularly fishing wood cover on the shady bank.  We caught all but 1 fish on plastics - mainly Senkos, Deep Creek Lures Sink N Catch worms, and Yum Dingers.  The other Duke teams also found success with similar baits and we even noticed one UNC team who caught a glimpse of our pattern late in the day and were able to land a few fish last minute fish as well. 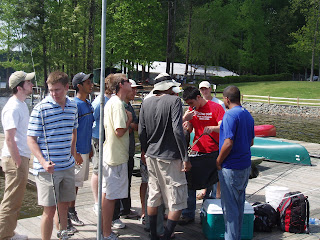 Everyone gathered to begin the weigh-in process

When it came time for the weigh-in, we felt pretty good about our day and just hoped it was enough knowing that conditions were tough.  A couple teams skunked and a couple only had 1 or 2 smaller fish.  One UNC team, who had finished 3rd last year, reported a limit and we held our breath as they brought them out of the livewell.  They had a nice kicker, but their five bass weighed in around 8 lbs. 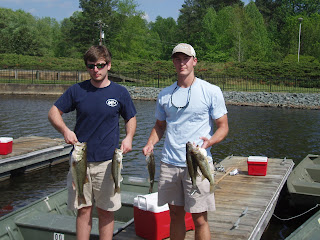 UNC with the 2nd place bag


At that point, we knew we had it won and were super excited to grab the win for Duke.  The other Duke teams came in 3rd and 6th, respectively.  The proceeds will go to the Schoolhouse of Wonder - a local organization here in Durham that gets kids outdoors and educated about the environment. 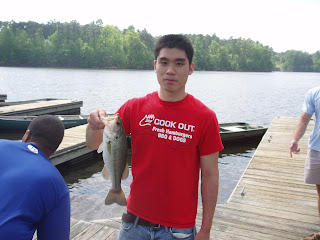 Jerry with the fish he caught with his partner Tejas.
(They also had a solid bass jump out of their "livewell" cooler earlier in the day) 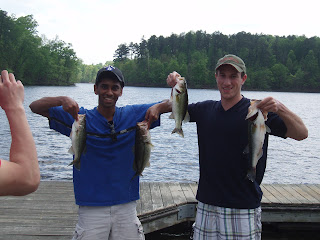 Chris and Krishan with their 3rd place bag


I had a blast at the tournament and was happy we could grab the win for a good cause.  And let's face it, the Duke-UNC rivalry will extend to any sport, any time, anywhere so it felt good beating UNC and doing it on their home waters.  However, they are a great club and with a lot of talented fishermen and a real passion for fishing. 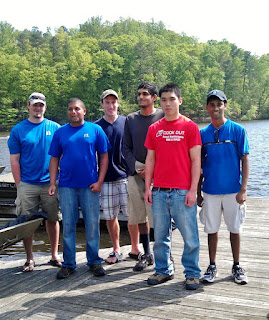 After talking to some folks at the dock, the take-away lesson is this - no matter how a lake fishes one year, you have to be prepared for any and all conditions.  The last two years this event was held a little earlier in the year and the temps were much lower.  This led to an aggressive bite and teams caught a lot of fish on spinnerbaits.  This year, conditions were much different and fish were in late-spawning to post-spawn stages.  They were a little more tight lipped and lazy and so a different approach was needed.  Thankfully, Santosh and I figured it out early and that made the difference.

This was also the first time I got to try out my new Carolina Custom Rods spinning set-ups made on white, Mud Hole (MHX) blanks.  They look amazing and fish even better.  I could feel every little piece of cover, yet they had enough backbone to hoist fish out of some hairy brush.  Santosh and I actually landed all of our fish on Carolina Custom Rods and we can't say enough about them.  Now it is back to work for a while and I really hope my next report is from a kayak.  Until then, tight lines!
Posted by Drew Haerer at 2:34 PM