I almost forgot to blog this, but now I am a little giddy thinking about it.  I was going through old pictures from my camera and found the following shots that I had nearly forgotten about from back in small game hunting season.  It was an incredibly freak thing and I had to share it!

During the last week of the small game season, I set-up in one of my favorite little patches of woods and waited for squirrels to come out.  I was carrying my grandfather's old Mossberg .22 mag rimfire rifle - a change-up from my typical Marlin .22.  As usual with that gun, I aim for the head in an attempt to not ruin any meat.  The hour or so I spent there was a little slow, but I ended up bagging one squirrel.  When I got him home to clean, I noticed something that made my jaw drop.

So, as I mentioned, this is one of my favorite patches of woods and I had hunted there quite a few times throughout the year.  Mary May and I are the only two who hunt this particular area of private land.  Unfortunatley, I had missed a few squirrels there this season as the open sites on the  guns aren't always easy to line up - especially at longer ranges.  There might have been a little user error too.  This particular squirrel had gotten lucky a few weeks earlier, as I noticed a bullet hole that went through one ear, took some of the hair off the top of his head, and went out the other ear.  Talk about a close call!  But I guess squirrels only have two lives as he is now in the freezer and will soon be part of a squirrel pot-pie.  If you want the recipe, feel free to email. 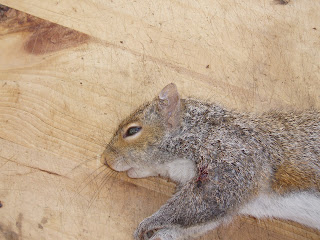 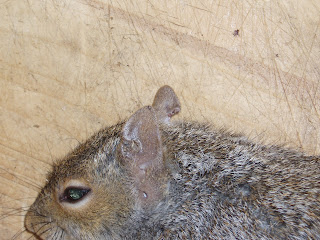