This is going to be a speed blog....
The latter portion of January has been a combo of hunting and fishing - although mainly hunting.  We have had some luck, bagging birds and squirrels, and also some bad luck. 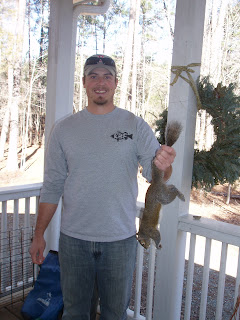 A chunky NC squirrel...headed for squirrel and dumplings
The bad luck: 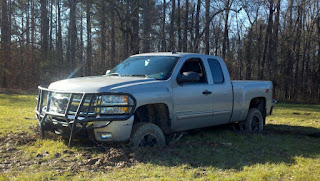 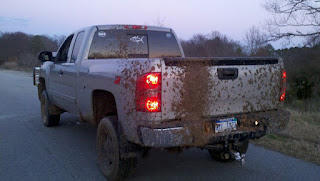 This is the truck of our good friend Santosh.  The Silverado is lifted about 8" and has plenty of bells and whistles.  Unfortunately, that could not save us from getting totally swamped on some game lands.  After returning from a hunt, we found out that it sinks quite fast.  We tried everything to get it out, but eventually needed a tow.  A huge thanks to Gary for pulling us out!  Trust me - it was way worse than the picture looks!
On the fishing front, Mary May and I finally got the yaks wet this week. It started slow..so slow that when I finally landed a fish I immediately thought of this:

But thankfully it finished hot as we ended up with a nice day catching crappie and bass on the Eno River.  Unfortunately, we only got one decent crappie with Mary May's 10-incher, and we ended up letting him go...so the freezer is still empty and knife still sharp. 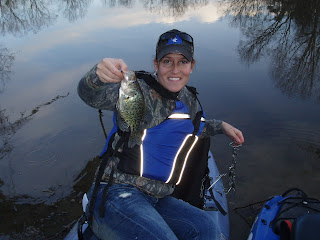 Tomorrow, we head out in search of surf and turf from the yaks.  It turns out that hunting is legal from non-motorized boats in NC, so we are going to squirrel hunt a portion of river that is on state game land and crappie fish after that.  Hopefully, I have an interesting blog to follow.  If not, I have a bunch of awesome news to share.  Until next time, tight lines!
Posted by Drew Haerer at 8:31 PM