I grew up in central Pennsylvania - where school is cancelled for the first two days of deer season and no-ones questions why you had doctors appointments the rest of the week that had you coming in late or leaving early.  Even though my parents grew up in and around cities, I will also be a country boy at heart and hunting is in my blood, instilled in me by my grandfather.

I remember my time in the woods with him extremely well - my first hunt, my first buck, my first miss, and many more.  As I got older, we hunted together less as the crippling effects of old age began to take their toll on his body.  And in part because of this, I haven't been hunting in nearly 10 years.  Recently, my grandfather gave me his old hunting belongings and when I was home for Christmas last month I got a chance to go through them.  As I opened one of the boxes, the smell immediately brought me back to a time of my youth.  Gun powder and musty smoke wafted from the container - smells I have known all my life and have a special place in my heart.  Mary May, who was sorting through things with me, agreed.  For her, it took her back to the smell of friend Ted Howse's basement - a man who took her mother and father under his wing and taught them about hunting, fishing, and the outdoors.  It is a smell I know many other outdoorsman know and it is one of those things that makes our common love for the outdoors so special.

I brought the box back with me to North Carolina - full of ammo, clothing, and odds and ends.  Among the odds and ends were knives that belonged to my grandfather, his father, and his father's father.  Coincidentally, Mary May and I purchased our hunting license and a few additional permits a few months ago, so we decided it was time to hit the woods.  Although I love all types of hunting, small game hunting has always been one of my favorites.  So, after doing some research we loaded up and headed out to a section of game lands in search of rabbits, squirrels, and game birds. 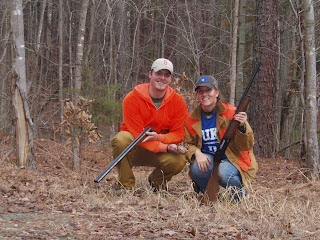 Home after our first hunt in NC
(*note that we were wearing orange hats and vests while hunting)
As always, I was toting my double barrel, side by side, 16 gauge shotgun.  It was the gun my granpda gave me before our first ever hunt and I have used it for nearly every small game hunt since.  Mary May carried her trusty 12 gauge and wore the game jacket I wore when I was younger - another pass down from my grandpa.

We started by targeting a thick, brushy area in a creek bottom.  However, we quickly realized that without dogs our chances there were slim.  It was simply too thick for us to properly hunt.  So we tried another area - again with no luck.  Finally, we came to an area that looked great.  It had a variety of habitats and wasn't far from the water.  It wasn't long before Mary May heard something in some tall grass.  I tried flushing it with no luck, so the mystery animal either headed down a hole or wasn't a game animal at all.  We walked the field and grasses before coming to a brushy draw.  It looked great,  but after walking almost the entire stretch, we hadn't seen a thing.  But finally, a bird flushed to my right and I turned to see a woodcock.  My first shot hit him, but I wasn't sure if he was dead or not.  The second barrel left no doubt as the bird dropped.  It was my first ever woodcock and both Mary May and I were all smiles! 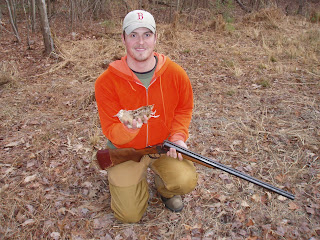 My first ever woodcock!

We stopped at one more location, but it wasn't the type of ground we were looking for either, so we headed back to Hillsborough to clean the bird and make some dinner.  The woodcock has very soft skin that tears easily, so I took extra care to pluck the bird.  After plucked and dressed, I soaked him in saltwater for about 20 minutes - a technique my grandfather taught me that helps draw blood out of the body.  I then added some sage and roasted the bird for about 12 minutes as Mary May prepped some mushrooms, onion, bacon, and garlic in a pan.  She cooked the "hash" until almost done and I pulled the bird from the oven before it was almost done.  I then cut it into small pieces and added it to the hash.  We finished them together with some dijon mustard and red pepper.  Paired with a couple of Yuenglings, the meal turned out absolutely delicious! 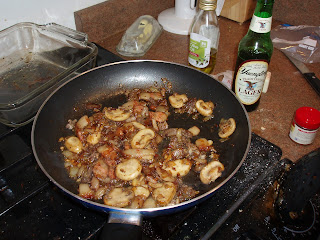 Our delicious woodcock hash!
Hopefully we can build on our success during our next trip.  I forgot how hard it was to hunt small game as we covered a lot of ground and beat a lot of brush.  I was so glad I got to share the day with Mary May - a gorgeous and more than capable hunting partner.  Until next time, tight lines?!
Posted by Drew Haerer at 9:18 AM