Typically, the crappie fishing at Jordan Lake, NC is hot this time of the year.  However, the abnormally warm weather this winter has the crappie a little more scattered than normal.  But, with temps in the upper 60's we couldn't justify not heading to the lake.  Of course, many others had the same idea, so my first couple choices of spots were already taken.  Out of curisoity, I went to a tertiary spot that I know fairly well, but have never fished during the winter months.  It turned out to be a great decision.  Although the crappie bite was slow, the catfish bite was red hot! 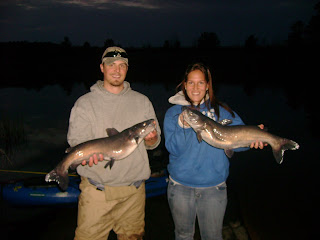 Mary May and I with a couple of big Jordan Lake, NC cats
Mary May, Bill Kohls, and myself launched our mini-fleet of Jackson Coosas just after noon.  The wind, which was supposed to be 2-5 MPH, was blowing much harder than expected.  Waves were rolling and we knew setting up over the fish would be difficult.  This time of the year, I target crappie with minnows fished on a small baithook with 2-3 large split shot about 14"-20" above the hook.  I use a technique called straight-lining, which means you try and set-up directly over top of the crappie and drop your baits straight down.  I let them hit the bottom, then reel up to the depth I see fish on my Humminbird 500 series depthfinder.  On this particular day, the fish I was marking were very scattered and most were within 5 feet of the lake bottom.

We set up over a channel and dropped our baits.  Within a minute, one of my rods bent nearly completely over and I lifted to feel a heavy fish - much heavier than a crappie.  The fish was fighting hard and caused me to set the drag back on my baitcasting reel (*note - I typically use spinning gear for crappie, but some random circumstances recently have me short a couple spinning combos).  Immediately I wondered whether it was a big bass, striper, or catfish.  Although I was hoping it was a bass of some sort, I had a sneaky suspicion it was a cat.  And indeed, as he came toward the surface I saw a huge grey flash and undeniable head of a catfish.  He continued to fight, pulling my kayak around as he saw fit.  Finally, the beast came to hand and after a short debate, was added to the stringer. 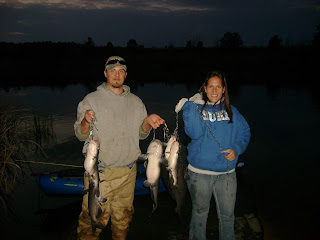 Within the next few minutes Bill hooked into a nice eater size channel cat and I followed with another channel.  Then it was Mary May's turn.  She set the hook on what she admits she knew was a big fish, but she didn't want to clue us in right away.  Her plan was play it cool until the fish came to the surface.  But, the fish - and fate - had other plans.  The fish happened to hit the minnow on her smallest rod - a 6', medium lite action rod with a size 10 reel and 4 lb test.  She quickly turned to me and asked for advice.  I told her how to turn her drag down and to just be patient.  From there, she did the rest.  She fought the brute perfectly as it pulled her around and tested every bit of her gear.  It made one last run for the bottom, rooting down into the mud and sand.  But she turned him and he finally started to come to the surface.  After what seemed like an eternity, we landed the big blue and Mary May could finally exhale. 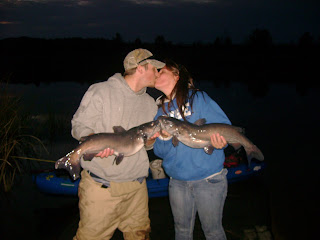 We landed another dozen cats and a couple of small crappie before deciding to turn south and look for a school of crappie.  We tried three other locations with little luck, so we returned to the catfish location again.  And sure enough, we found the fish again.  This time we were catching more crappie, although none big enough keep.  We also caught catfish regularly until dark.  My paddle back the launch required two strokes on the right for every one on the left due to the stringer of cats attached to the side.  As the sun began to set, we pulled the yaks to the beach, took a few photos, stashed our gear, and headed home. 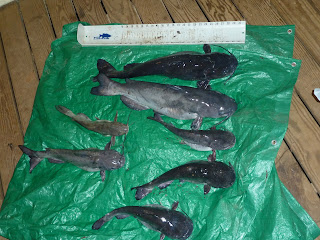 A great haul of catfish!  (The measuring board is over 30")

Once home, we took a few more photos, filleted the fish, and prepped the oil.  After a quick soak in milk, the fillets were battered, spiced, and dropped into the hot oil for a yummy fish dinner!  It certainly wasn't Plan A, but it was an awesome day on the water and in the kitchen.  I know the crappie bite will be picking up soon and a return trip to Jordan will be in the cards sooner rather than later.  I hope everyone else is still enjoying their time on the water, because for me this sport never stops!  Tight lines! 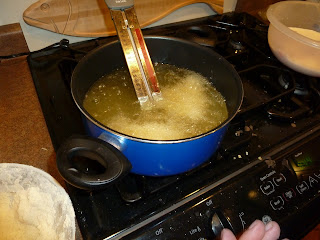