The Friday after Thanksgiving has always been a day I like to spend outdoors whether fishing, hunting, or just going for a walk.  This year, Mary May was stuck at work all day and the weather looked fantastic, so I decided to head to a small, local river.  I have actually only fished this particular part of the river twice before.  One of those times was in mid-February and I only managed a handful of small bass.  The other time was early this summer.  The bite was a little slow then too, but I did manage a 4 lb bass on a buzzbait.  So, I really wasn't sure what to expect.  I was joined by Gary "froggy waters" Ribet, who also wanted to scout the stretch a bit more, as he had heard mixed reviews.  He also wanted to show off his new bait tank, which he has been designing.

We launched and slowly pushed up-river.  Gary had 7 or 8 rods out trying for crappie (or anything else willing to eat a minnow) and I tied on a plastic worm to fish for bass.  On my second cast, I landed a 12" bass and ten minutes later landed another short, but chunky largemouth.  We both thought for sure that we had a great day ahead of us.  But, then the bite got slow....VERY slow.  Gary couldn't get anything to eat his minnows and it seemed like my plastic worm was invisible.  Finally, we decided to turn around and fish back down river.  On the way, we ran into a local fisherman who told us the best fishing is usually above where we had turned around.  We looked at each other, a little frustrated that we hadn't fished further, but we weren't turning around at that point.  After all, we had barely managed a bite in quite some time.

But then, suddenly, our luck started to change. I picked up a 2 lb bass, then another. As the wind started to pick-up, I threw my worm along a downed tree and wham - a big fish nailed it and started running like crazy. He tried to head for the cover of the log, but I managed to get him out into open water. My Coosa spun back 180 degrees and my drag was ripping. Finally, the brute surfaced and I grabbed him - a solid 5 lb bass. 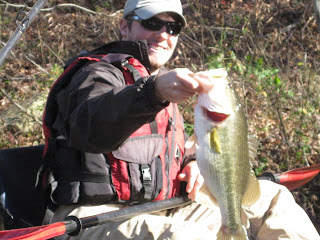 We rounded the next corner and were at the launch area.  Suddenly, I look over and see 3 of Gary's rods get bit at once.  While watching him, I hooked another bass.  Then I see 3 more of Gary's rods start bobbing from bites.  After all of that time, Gary had found his honey hole....right next to the launch. 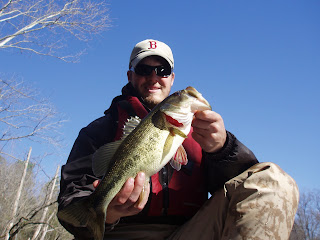 A solid 3 lber in late November

I fished through the area a little more and managed another 8 bass up to 3 lbs.  Gary was busy catching fish after fish after fish, often hooking 5 or 6 at a time.  I think the wind, which picked up in the late morning, was the key to getting the fish more active.  This is often the case, whether on a river, lake, pond, or anywhere else.  Eventually, I joined in the crappie fishing action and for the next few hours we caught fish as fast as we could reel them in.  By the time we got off the water, I would estimate we caught 70 crappie and a few more bass. 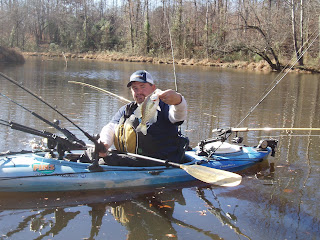 One of many nice crappie caught with Gary's super rig!

It was a fantastic day of scouting some new, local water filled with quantity and quality.  Small flows rarely suprise me anymore, as I have caught a pile of big fish from small rivers this year, but I must admit I was a little suprised at how well we did on that stretch.  Hopefully I can manage another river trip or two before winter sets in.  Until next time, tight lines!
Posted by Drew Haerer at 10:20 AM 4 comments