After our last outing on Belews, Bill Kohls and I were interested in testing our talents against some competition.  Last weekend was the bi-weekly open tournament on the lake that draws a mix of local and regional anglers.  A few of them, as we came to find out, fish the BFL and FLW tours and carry some impressive sponsors.  The assortment of bass boats was impressive as well, but Bill and I knew we had a good game plan and at 7 AM we running across the lake to our first spot.

We hooked two fish within the first 15 minutes, both short, but quickly hooked two more that kept.  These fish were all caught on drop shots and plastics in a creek arm with a deep channel.  Then I caught a solid 3 lber on a Spro Little John DD crankbait and Bill followed with a fat 2.75 lb fish on a Strike King 6XD.  It was 8:30 AM - we were one fish from a limit and catching small fish with regularity.  We just wanted to get one more before we upsized our baits and chased some culling bass.

We ran to our next area and I bombed a cast between two docks.  My line went tight and I set the hook on a nice fish.  She ran hard sideways and I fought hard to get her into open water.  But, my fear became a reality.  Somehow, I got her around the posts of the dock, but the line hung up on the motor of the adjacent boat.  A few seconds later, she was gone and my stomach dropped.  I never got a good look, but I estimate she went between 3.5-4.5 lbs judging by the fight.  The fish would have been a very key part of our day. 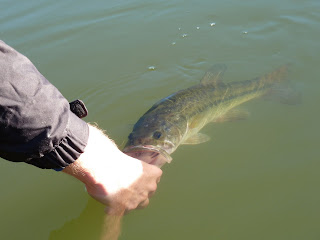 We then went a long time without many bites and the bites we had were short fish.  We did see a couple big fish follow the small fish to the boat as we reeled them in, but we couldn't get them to bite.  We also knew the bite was changing.  That deep cranking bite we had been on a couple of weeks ago was completely gone and many of the fish were very deep.  Unfortunately, our electronics did not allow for us to move deep and fish spoons and drop shots for those fish.  So, we focused on fishing areas that fish use to move from shallow to deep water as well as shoreline cover.

It was around 1:30 PM and we needed a 5th keeper badly.  I tossed my plastic worm near a laydown and twitched it a few times with no luck.  As I started to reel the bait in, I looked down and saw a 4+ lb bass swim away from the bait.  My heart sank, as I knew my tournament nerves got the best of me.  Had I properly dead sticked the bait and fished a little slower, I am almost positive that fish would have hit.  Instead, I spooked him and he was gone.  This is a big part of tournament fishing that most people never realize.  Controlling your adrenaline, emotions, and body are a huge part of tourney day.

At this point I felt pretty down...and our next stop didn't help.  I caught a short fish off a dock before losing another short.  Finally, Bill got a good bite on his dropshot, set the hook, and watched a 3 lber go airborn 8 feet from the boat.  Unfortunately, we also saw the dropshot rig fly sideways into the water...fish off!

It was 2:15 PM and we had 45 minutes before weigh-in.  We had one more area we wanted to hit, but decided to stop at a staging area with docks on the way.  On about our 6th dock I threw my worm under a jet-ski platform.  All of a sudden I felt a bite, set the hook, and a big fish went airborn.  My heartbeat sky rocketed as the fish jumped a second time.  He had a massive head and was putting the heat on my spinning gear.  After a nice fight, Bill got him in the net and our limit was full.  The fish was extremely skinny, but measured 22".  It would have been a great kayak tournament fish, but we were elated that our limit was finished.

We fished the remaining twenty minutes without a bite and headed to the weigh-in.  Usually tournaments on Belews take anywhere from 12 to 16 lbs to win, as the lake isn't known for big fish, but has a lot of solid fish.  Our final bag weighed 12 lbs 5 ozs and our big fish was 4 lbs 15 oz.  That was good enough for third place and a tie for big fish.  The winning bag was a tad over 15 lbs.  We also learned that we were the only boat in the field fishing shallow and most spent their day in 50-100 feet fishing spoons.  We knew if we had landed my fish in the morning and Bills drop shot fish late, we would have had the winning weight.  Add to it the fish that I spooked by fishing too fast, we would have put together a monster limit for that lake.  However, we were extremely happy to have done well in a talented field while doing something that wasn't working for anyone else. 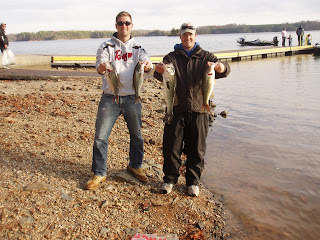 It was another one of those "never give up" days where we managed a big fish late.  The day illustrated the good and bad, ups and downs, & victory and defeat that accompany tournament bass fishing.  Those highs are what keep me coming back and push me to learn more and more about the sport.

A huge thanks to Bill for inviting me to team up with him and letting me clutter up his boat!  Now, it's time to drag the yaks out and go for a post Thanksgiving paddle!  Until next time, tight lines!
Posted by Drew Haerer at 5:49 PM