This past Saturday I found myself in an unusual position.  The heavy Thursday and Friday rains were much needed, but they had turned the local rivers to chocolate milk.  And since it was supposed to be very windy, I decided the Coosas were getting the week off.  I was up early and headed west to meet good friend Bill Kohls and do some fishing on Belews Lake, NC.

I didn't know anything about Belews prior.  In fact, I didn't even look at the lake on Google Maps, which is an extreme rarity for me.  Instead I relied on Bill's knowledge of Belews.  The big things to know are that it is a very clear lake, it is a fairly deep lake, it is power plant lake (ie - warm water), and that it has docks.  I was literally salivating at the idea of fishing Belews.  I rarely fish water in North Carolina where I can see the bottom in 10 feet.  Plus, the air temp started out at a brisk 35 degrees and was only predicted to rise to 50, so warm water was going to be a huge perk.

After getting our gear situated, we launched the boat and were on our way to explore the hot hole area.  Duke Power doesn't let you get close to the actual hot hole, but you can get to an area with visible current and water that was reaching 85+ degrees.  We quickly realized that the warm water was not the ticket and moved across the lake. 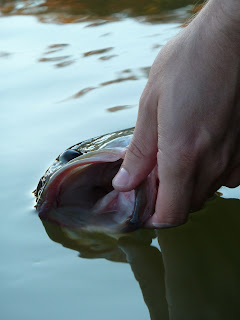 I quickly lost a short fish on a Lucky Craft CB250 crankbait and a few casts later had another small bass chase my worm to the boat before retreating to the depths.  We weren't seeing shad, which bothered us, so we moved again.  The new spot looked good, with a mix of rip-rap and docks.  Before long, Bill boated the first bass, which blasted his topwater bait 3 times before completely inhaling it.  On the next cast I lost a bass on a plastic worm and lost another not long after on the same worm.  I was a little frustrated because usually I have a good hook-up ratio on shakey head worms, but so far I was 0 for 2 on the worm and 0 for 3 overall.

We moved to a wind blown bank and that is when we started figuring out the pattern.  The fish were on deep, tapering, wind blown points in 13-25 feet of water.  We pulled out our deep running crankbaits and went to work.  The Spro Little John DD proved to be the best producer in large part because it was getting down to the bottom in 20 feet of water.  "Clear Charteuse" and "Spooky Nasty" were the best colors on the day (and also two of my general favorites) and our Carolina Custom Rods cranking rods made throwing those cranks an absolute joy.  In particular, my CCR deep cranking rod is an absolute beast paired with a Shimano Curado 200 DPV with a 5.2:1 gear ratio. 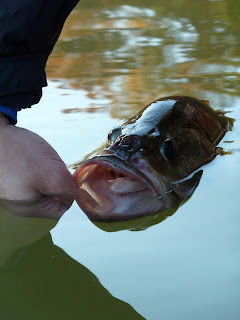 By noon we had about 14 lbs in the boat (our 5 fish limit) and had culled quite a few fish.  Although most of our fish came on deep cranks, our biggest came on a plastic worm.  We were already pretty satisified with our day and decided to go try for catfish for a while.  Long story short, catfishing was slow and we only managed a few small bites.

After that we messed around a little in an area of the lake Bill hadn't fished before, but only managed a couple small bass.  And before we knew it, it was time to snap a few photos and head home.  Bill and I were happy with our day on the lake, particularly because 14 lbs is a good limit from Belews and we left them biting.  I actually think we could have culled up to 15-18 lbs had we kept bass fishing and got a little lucky. 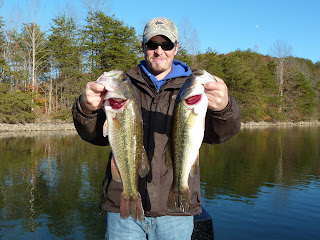 It was odd fishing late summer patterns in cold, fall weather, but it is important to recognize that water temperature will dictate where the fish will be.  When bass set-up on those deep points eating shad, you can usually catch fish on deep running cranks (like we did), flutter spoons, or even Carolina rigs. 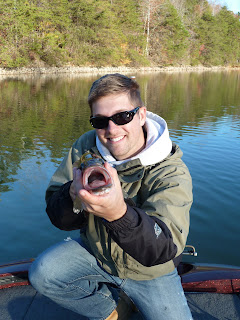 I also wanted to note one last thing.  This trip took place a little over a week ago.  On the way out the door I randomly picked up my camo Penn State hate even though PSU had a bye week.  As you can tell by the pictures in this blog, that is a rarity, as I am usually rocking my Red Sox or Jackson Kayak hats.  I returned home later that evening to find breaking news about a scandal at Penn State. Since then, as I am sure most you know, things have been in an uproar.  I grew up in central PA and Penn State football has always been in my blood.  For me, the allegations were simply heartbreaking and my thoughts and prayers go out to the victims and their families.  At this point, we can only hope for the best moving forward and need to make this about the victims and not football.﻿
This week it will be back to the yak to search for some chilly river bass. Until next time - tight lines!
Posted by Drew Haerer at 9:31 AM