As the crowd gathered into the pre-tournament meeting, a sense of excitement grew. Prizes lined the room, including the camo Coosa featured as the grand prize. The premise was simple - the biggest 3 fish limit of 1 bass, 1 catfish, and 1 panfish would win as long as they were caught in a river, stream, or creek within roughly 40 miles of the meeting location in Bahama, NC. And as participants, youth and adults alike, exited the meeting - I knew it was going to be a great event.

Gary Ribet and I had been planning the event for quite some time and had worked extremely hard to secure prize donations, sponsors, and donations for the Schoolhouse of Wonder - our ever deserving charity. Wendy Tonker, one of the admins at Schoolhouse of Wonder, was also instrumental in our success and deserves a huge thanks. 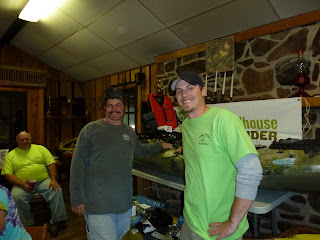 Mary May and I spent the majority of our Saturday on the water with Zach and Julie - a brother-sister pair hoping to do well. Zach is a teen who loves to fish and his big sister agreed to fish with him for the day. Mary May and I were hoping to help them catch a few fish and have fun. It turns out, they didn't need much help from us. They caught a crappie as soon as we met them and went on to catch bream throughout the day. And Zach gave it his best shot, throwing nearly every bait he had, but couldn't come up with a bass or catfish to complete the slam. Although tired from fighting the wind, they had a good time on the water and met us later at the weigh-in. 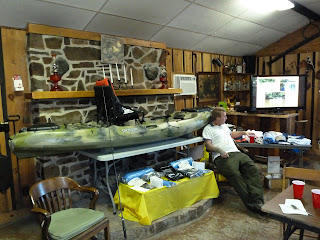 I returned to the weigh-in location with Mary May and started prepping for the festivities. The BBQ chicken grilling outside smelled incredible and all sorts of reports were coming in. Anglers fished many different rivers in the radius. Some were muddy and others gin clear. Some were extremely shallow and others flowing at near perfect early fall levels. And some were near the outside of the radius, while others were a mere minutes away. 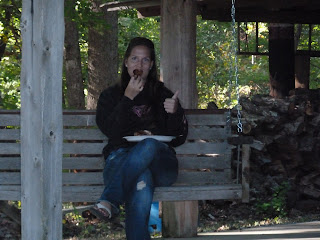 The room was near capacity as many of the participants had returned with friends and family - giving it the feel of a true community event. Photos were judged by Gary and two of the executive board members from Schoolhouse of Wonder and then passed to me and I put them into a short presentation.

In 5th place was the father-son team of Brandon and Tyler Olson. 4th place went to Wendy Tonker and her youth partner Diante - who found their fishing spot much lower than expected. 3rd place went to local Travis Olson who put together a nice slam. 2nd place was earned by Kyle Brafford who was new to most of the rivers of the area. However, he made a smart mid-day change to his strategy that paid off big time. The grand prize winner was Bill Kohls. Bill had a plan of attack on a local flow that required some serious work. For him, the legwork paid off. He caught a 21" bass early and a 22.5" catfish late to help secure the victory. 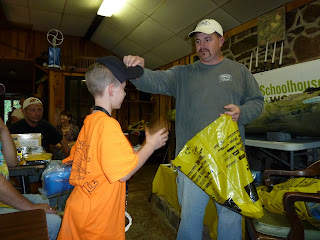 The biggest bass and biggest catfish prizes went to Bill Kohls and the biggest panfish went to John Hoke with an impressive 12" yellow perch. He also mentioned losing a 14.5" Roanoke bass that flopped off of his board before he could snap a picture. The biggest fish (any species) and smallest fish (any species) (courtesy of Settles Bridge Supply House) both went to Bill Kohls as well for his big catfish and 3.5" bream.

Additional prizes were then raffled off and literally every single person in the room walked away with something, the silent auction concluded with a ton of awesome items going to good homes, and Wendy Tonker took the floor for Schoolhouse. Not only did she announce that they had picked up new volunteers from the event, but we learned that the Froggy Waters Slam had raised $1500 for Schoolhouse of Wonder. We were so extremely happy and proud to have raised the money for such a great cause. 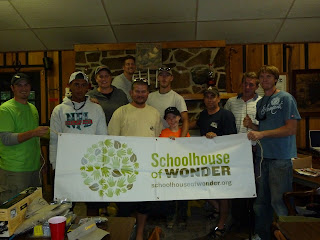 A huge thanks to all of our sponsors and donors, the participants, Schoolhouse of Wonder, Gary Ribet & Froggy Waters Outdoors, Brett Hinson & Carolina Custom Rods, Jackson Kayak, and many more! A special thanks to Mary May Pratt, who put up with me through my late night emails, random phone calls, and weekend meetings as well as tolerating the huge pile of prizes that stacked up in our dining room. I couldn't have done it without your help and support.

We hope to make the slam an annual event that grows more and more each year. If you want to make a last minute donation to the Schoolhouse of Wonder, you can do so at their website. Now it is time to relax a little and get back to fishing.
Posted by Drew Haerer at 8:07 AM